Why read about superheroes, when you can BE one? 4 Stars

Kick-Ass turns the superhero genre on its head. It delivers a fun, action packed, and comedy-filled story that tackles the genre in a unique way and invests you into its world from the very beginning.

Dave Lizewski (Aaron Taylor-Johnson) is a normal teenager and comic book enthusiast who chooses to live out his dream of becoming a superhero and adopts the name Kick-Ass as his alter ego. From his very first encounter, Dave learns that being a superhero is not as easy as it looks in comic books. He gets stab only a few seconds into the fight and gets hit by a car which leaves him with several broken bones that require several metal rods and pins to be put back together (he happily compares himself to Wolverine). However, that does not stop him and he continues to train daily. On his second encounter, he stops three guys from beating up another guy while being watched by bystanders who record the encounter and upload it to YouTube; the world quickly learns of Kick-Ass and he becomes a real life superhero. He learns there are other superheroes in town: Mindy Macready (Chloë Grace Moretz) an 11 year-old girl who goes by the name of Hit-Girl and Damon Macready (Nicolas Cage), a former cop and Mindy’s father who calls himself Big Daddy. They save Kick-Ass’ life after another one of his encounters goes terribly wrong. Big Daddy has been training Hit Girl to kill mob leader Frank D’Amico (Mark Strong) after being framed as a dirty cop and being the reason his wife died while he was in jail. Kick-Ass, Hit-Girl and Big Daddy are betrayed by Red Mist (Christopher Mintz-Plasse) who happens to be Frank’s son, Christopher D’Amico. Kick-Ass and Hit-Girl (who does most of the work) team up and work together to bring down Frank D’Amico and his entire mob.

I remember when I first watched the original trailer for Kick-Ass, I though it was going to be another Scary Movie spoof movie like Superhero Movie (too many “movies”). Boy, was I wrong and am I glad I was? Kick-Ass is one of the best superhero films and dare I say, one of the few movies that is better than the source material. Matthew Vaughn (Layer Cake, X-Men: First Class, Kingsman: The Secret Service) does an amazing job balancing the comedy and the violence this movie brings into the genre. It is beautifully shot and as always, Matthew Vaughn’s action scenes are pleasant to watch. Aaron Taylor-Johnson does a great job as Kick-Ass. He is able to handle the constant emotional tone shifts. Also, this is one of Nicolas Cage’s best performances. It is obvious how much fun he is having with the character of Big Daddy (perhaps he still wishes his Superman film would have been made). Kick-Ass is fun from beginning to end.

Kick-Ass was surprisingly shot on 35mm film using Panavision cameras and completed as a 2K digital intermediate. This 4k UHD Blu-Ray contains the film in a 2160p upscale with HDR10, Dolby Vision and a 2.40:1 aspect ratio. The upscaling is noticeable in a lot of the film with scenes full of grain, especially during dark scenes but it wasn’t enough to take me out of the film. Although being a somewhat colorful film, the HDR is minimal with the colors of the costume looking slightly better than on the original Blu-Ray. I was disappointed at this because I expected the colors to stand out more than they did. In terms of video, I would recommend getting this version of the film if you don’t already own the original Blu-Ray.

The audio is what makes this UHD version worth it. It comes with a new Dolby Atmos 7.1.4 track (with TrueHD 7.1 core). I watched it in my 7.1.2 set up and from the beginning, the score immediately takes advantage of the height speakers and literally surrounds you. There is a scene which involves a fire and the flames feel like they are also around you and not only the characters; it almost feels like you are in that building with them. Dave’s narration comes from the center of your living room which makes it enjoyable and not distracting. The LFE is very present in this version and hits hard during action sequences. Gunshots are more pronounce and punches have more force and are specially noticeable in scenes involving Hit-Girl. All this combined is what makes the warehouse scene a lot more powerful and emotional.

All of the special features can be found on the included 1080p Blu-ray version of the film.

Ass-Kicking Bonus View (1080p; 1:57:44): Watch the movie with being the scenes, facts audio commentary by cast and director plays as you are watching the film.

A new Kind of Superhero: The Making of Kick-Ass (1080p; 1:53:04): Takes you a detail behind the scenes of the making of the film from 3 years before the release of it.

Pushing the Boundaries (1080p; 13:21): Mathew Vaughn talks about how the process of the movie started after meeting Mark Miller.

Tempting Fate (1080p; 9:39): Mathew Vaughn talking about the different editors on the film and the different cuts for the ending.

The Art of Kick-Ass: a slideshow of storyboards, costumes, on-set photography, production designs, and John Ramita JR.’s art for the film.

North American Campaign: Slideshow of photos from the Marketing team.

International Campaign: Slideshow of photos from the Marketing team.

Digital Copy: An insert contains a code to redeem  a digital copy of the film.

There is no doubt Kick-Ass is a must-watch! It has an amazing cast who bring every role they play to life. It’s the oddball of the superhero genre but it deserves to be considered one of the best. 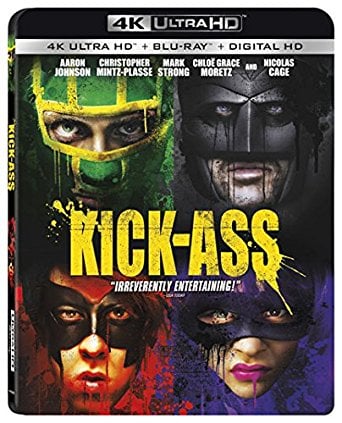