Like most comedy concert films, there are both inspired bits and some definite letdowns in Kevin Hart: What Now?

While many top comedians are granted a comedy special on HBO, Showtime, or Comedy Central, occasionally there are comics that are such top draws that they can command a feature film of their stand-up acts. Richard Pryor fronted a series of such films, and Eddie Murphy at his peak also got his act onto celluloid. The most recent honoree is Kevin Hart. With a couple of high profile movie successes to his credit and a previous feature film concert Let Me Explain, the diminutive comic headlined a sold-out comedy tour that spanned over one hundred and fifty shows across America and Australia and ended in a sellout of Philadelphia’s Lincoln Financial Field to the largest audience ever to view a live stand-up act. What Now? was filmed over two nights in Philadelphia showing the big voiced funny man in a well-constructed if fairly traditional act that thoroughly delights the crowd but winds up as only moderately entertaining for at-home viewing.

Before the actual act begins, Hart along with some of his big-named show biz cronies and with the benefit of Tim Story’s direction has put together a prologue and coda which finds the star enmeshed in a James Bond-like adventure playing high stakes poker against a Russian gangster (David Meunier) with drinks served by bartender Ed Helms and pithy comments courtesy of his lady friend Hallee Berry and fellow gambler Don Cheadle. It’s a richly appointed and classy looking homage to 007 but like the stand-up act itself only moderately funny and more interesting visually than narratively.

Abandoning the bloodied tux from his espionage encounter for black leather and gold chains, Hart greets his sold out audience and then begins spinning stories of his life, some wildly exaggerated, of course (a talking raccoon, a knee-cap robbing orangutan) and many obviously drawn from true events. His fiancé, his two children, his father, and his cronies all find themselves worked into his act, and to its credit it’s mostly about PG-rated topics (apart from the steady stream of street language used to describe the events which earned the movie its R rating) until we get to segments about sex toys and raging diarrhea at an airport surrounded by rabid fans, admittedly two of the funnier bits the comedian tackles. These subjects and a very funny segue into designer coffee orders late in the act are the peak moments of the comic’s material. Hart manages to bring back and milk earlier jokes later into the set on occasion giving a full circle feel to the show, and even when the punchlines begin to get repetitive for viewers (sarcastic female nemeses who proclaim “Really?” as a convenient putdown of the comic’s daily woes), the audience seems to love the familiarity generated by such repetition.

More than a dozen cameras capture Hart’s act from every conceivable angle (Leslie Small directed the concert segments) even if there are, for my taste, far too many audience reaction shots to assure the viewer that everyone is having a grand time and finding the show consistently hysterical. More cleverly, however, is the use of video screens behind the star, screens which sometimes accentuate the comic’s tales of tribulation (a hypothetical story about his girl friend attacked by a shark with his subsequent reaction, a stormy night when he must protect his family from would-be intruders) and which sometimes serve practical purposes (as when Hart’s story of needing desperately to use the airport bathroom facilities gets a helpful visual kick by showing the star sitting on a video toilet). The star himself has never been known for restraint, and his stage delivery is loud and occasionally shrill lacking the occasional subtlety that Richard Pryor (the king of feature film comic acts) used so skillfully, making his subsequent bursts of explosive anger, terror, or amusement all the more hilarious.

The movie has been presented in its theatrical 2.40:1 aspect ratio and is offered in 1080p resolution using the AVC codec. The widescreen ratio gives the Casino Royale-style opening credits and prologue a genuine feel of a spy film and offer stunning sharpness and detail and sensational color densities with realistic skin tones. Contrast throughout is first-rate, and the black levels are only a shade or two away from optimum. The movie has been divided into 20 chapters.

The DTS-HD Master Audio 5.1 sound mix offers outstanding handling of the dialogue (center channel), music, and atmospheric effects in giving the concert (and the Bond-style prologue and coda) a really sophisticated movie-style experience.

Deleted/Alternate Scenes (3:02, HD): five scenes may be watched together in montage or individually.

Making of a Spy Intro (6:13, HD): director Tim Story guides us through the filming of the opening and closing segments of the movie with Hallee Berry and Don Cheadle commenting along with star Kevin Hart.

On Tour with Kevin Hart (18:06, HD): behind-the-scenes looks at Hart’s extensive comedy tour as it hits such venues as Texas, Kansas, Alabama, Tennessee, Florida, Massachusetts, Virginia, and finally in his hometown Philadelphia.

Like most comedy concert films, there are both inspired bits and some definite letdowns in Kevin Hart: What Now? With a prologue that offers a different tone (less shrill, more modulated) from the stand-up act itself, What Now? will certainly give the star’s fans more bang for their movie buck, and the Blu-ray’s video and audio quality will also be more than welcomed. 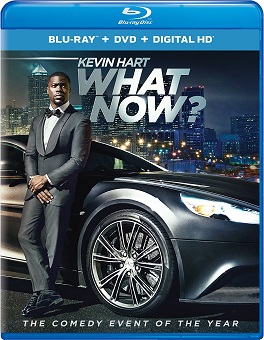