A broad and mostly brainless spy comedy with good actors and some good elements, Greg Mottola’s Keeping Up with the Jones only occasionally catches fire with its humor and its action components.

A broad and mostly brainless spy comedy with good actors and some good elements, Greg Mottola’s Keeping Up with the Jones only occasionally catches fire with its humor and its action components. Mostly, though, it wastes good talent on third-rate material with a slight story, characters who resemble nothing on this planet, and screeching action and dead bodies that seem to go unnoticed by all those in the vicinity.

Having packed their two boys off to summer camp, human resources consultant Jeff Gaffney (Zach Galifianakis) and his interior designer wife Karen (Isla Fisher) carry on with their mundane lives content in living in Atlanta and making no waves. They’re intrigued by the glamorous couple who moves in across the street, travel writer Tim Jones (Jon Hamm) and his cooking blogger wife Natalie (Gal Gadot), but who seem somewhat alien to the peacefulness of suburbia. Karen suspects something is up with the Joneses, but Jeff, starved for a close friend, takes Tim on face value and enjoys his company. When an accident reveals a bug planted in the Gaffney home by the Joneses, Jeff and Karen begin their own undercover operation to discover what the Joneses are actually up to.

Michael LeSieur’s screenplay is really starved for invention for the most part, the espionage aspects of the narrative really rather pitiful even with the haphazardly directed high speed chase where the two spies drag along their ordinary neighborhood counterparts who spend the event screaming and hollering between gun blasts and explosions and the climactic face-off with Mr. Big, here called “The Scorpion,” which isn’t nearly as funny as it hopes to be and only increases its failure as it runs on and on. Where it works, though, are in the more human moments especially between the two guys Jeff and Tim, each rather hungry for a friend they can unburden themselves on. The bonding sequence happens quite memorably in a snake restaurant, by far the best sequence in the movie as innocent, wide-eyed Jeff has his eyes opened to the unusual aspects of life in a scene that wonderfully modulates between heartfelt male bonding and slapstick humor, and it carries through into a montage of simulated sky diving which shows the joy they’re experiencing on both of their faces as they relish each other’s company. So much else in the film, however, has to be explained away with dramatic license as Jeff and Karen are so literal and thick-headed that common sense never rears its ugly head, and the spies, so allegedly expert at covert operations, can’t even manage to pass as quiet suburbanites without drawing the attention of all of their neighbors (most notably seen in a lingerie sequence between Karen and Natalie that’s meant to be sexy and titillating but rather comes off as strained and obvious).

Zach Galifianakis has some quite appealing moments as the friendly, well-meaning nerd always willing to help others and generous to a fault. He’s less manic here than in most of his movies (except when director Greg Mottola allows the average joes to constantly scream and bumble around in slapstick confusion that isn’t very funny), but he really conveys his yearning for a real friend quite convincingly. Isla Fisher though she’s incredibly beautiful is even less adept with the comic elements and less believable as a doe-eyed innocent than Galifianakis. Jon Hamm, born to play a suave spy, certainly looks the part, but he’s hamstringed by the dopey script which doesn’t allow his supposed expertise at his job to really shine through. New Wonder Woman Gal Gadot also has trouble handling anything subtle and pushes too hard for exasperated humor. Matt Walsh and Maribeth Monroe are fine as neighbors the Cravertons who play a more important role in the espionage events than they first appear while Michael Liu as the proprietor of the snake restaurant aids greatly in making that sequence so amusingly effective.

The film’s 2.40 theatrical aspect ratio is faithfully reproduced in 1080p resolution using the AVC codec. Apart from a few soft shots (likely glamour photography for the ladies though neither needs it), sharpness is excellent. Color is realistic and appealing with very believable skin tones. Contrast has been consistently applied throughout the transfer, and black levels are very good if not the inkiest. The movie has been divided into 28 chapters.

The DTS-HD Master Audio 7.1 sound mix uses its available channels to expand the action scenes with appropriate atmospheric effects (that chase with cars and motorcycles and blazing guns and rifles makes full use of the full sound array including the LFE channel). Dialogue has been directed to the center channel. Jake Monaco’s rather non-descript background score likewise gets channeled through the front and rear soundstages.

Deleted Scenes (18:17, HD): five scenes may be viewed separately or in montage.

Spy Game (11:44, HD): director Greg Mottola and stars Zach Galifianakis, Isla Fisher, Jon Hamm, and Gal Gadot discuss their roles in the production while split screen shows us behind-the-scene views of the movie as filming progressed and is presented in the final product.

Keeping Up with Georgia (5:04, HD): director Greg Mottola, stars Zach Galifianakis and Jon Hamm, and production designer Mark Ricker discuss the locations used in the film covering everything from the cul-de-sac where exteriors were filmed to other buildings around Atlanta which stood in for Jeff’s office and, in the coda, Marrakesh.

Art Gallery (HD): twenty-four stills and behind-the-scenes shots of the production which can be advanced automatically or manually.

Promo Trailers (HD): Why Him?, Absolutely Fabulous: The Movie, Masterminds.

A very middling action comedy, Keeping Up with the Jones will likely be for most a decent popcorn picture without subtlety or invention working in its favor. At least the Blu-ray transfer is excellent with outstanding video and audio quality. 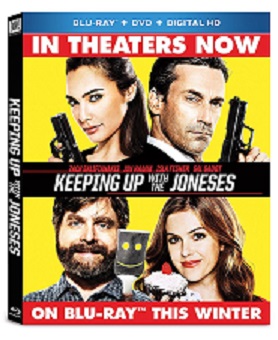