Forum List What's new Dark Style Change width
Log in Register
What's new Search
Menu
Log in
Register
Navigation
Install the app
More options
Dark Style
Close Menu
Posted on October 29, 2018 by Sam Posten
You are using an out of date browser. It may not display this or other websites correctly.
You should upgrade or use an alternative browser.
Don't get all hysterical! Say thank you for your miracle! 2 Stars

Max Connor (Francis Capra) is having a rough week. His Mom and her fiancee have dropped the bomb on him that they are set to be engaged. He’s learned that his dad’s not lost in the wind after all and he might be close in town (and a bit of a jerk). He’s pursued by a gang of fellow students for mostly unknown reasons and falls into a warehouse basement where he unwittingly unleashes the genie Kazaam (Shaquille O’Neal) who wants to grant him three wishes. Aladdin’s awesome genie Kazaam is not. He’s rusty, corny and convinced he has more musical talent than he really does. But perhaps with a little luck and a bit of bonding Kazaam and Max can help each other get what they want: Max’s dad out of jams and Kazaam out of his eternity granting wishes. 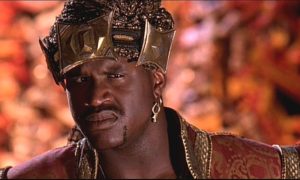 On one hand Kazaam is a textbook example of why celebrity vehicles are a terrible idea. What little plot is available here is stolen from films that have done it a million times better. The rapping is un-listenable. Neither Max nor Kazaam (nor any of the 3 parents) seems to be worthy of redemption or is even likable for any reason. With all of thee flaws, it’s not a great film, objectively speaking.

And yet…. a generation of 90s kids LOVE this film. Perhaps it’s the fantasy of befriending both Shaq and a wish granting genie. Perhaps it’s the early CGI. Perhaps it’s Shaq’s mugging for the camera. Whatever it is I don’t get it, but if it’s your bag then you do you and don’t let anyone else’s opinion of this film color your fandom.

The other interesting thing from a historic perspective is that somehow a whole generation of people have convinced themselves that this film really was named Shazam played by… Sinbad. It’s not. Never was. Never even remotely marketed that way. BUT the PR for the film has the name SHAQ in 40 point bold letters, twice as big as the jumbled green lettering of Kazaam. There’s been whole legions of ink spilled on this phenomenon. My guess is people tried to forget this film and the confusion settled in.

Somehow the controversy turns out to be more interesting than the original film. And so it goes! Ultimately Shaq turned out to be a pretty charismatic presence on screen. Maybe Kazaam is no Oscar winner, but in the end it was a path that ended up in fun results for him. 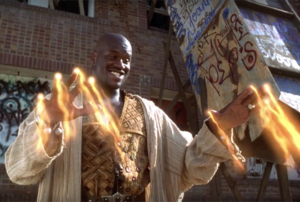 Let’s get this out of the way first: there’s a ton of grain and noise in this transfer. Scenes in the nightclub and warehouse interiors are full of it, and I did find it a bit distracting at times.

It’s also shot soft, with a lot of scenes of Shaq himself just plain out of focus. It’s rare you see it in a major release like this, but it’s pretty noticeable when it happens. My theory is that Shaq simply wasn’t hitting marks or he is so big that his enormous body moved his head out of the critical focus areas.

I’ve read a bit about the CGI from the original reviews and it seems like a lot of the pro reviewers weren’t too taken with it, but I think it holds up pretty well here given the goofy nature of the film itself. The washcloths wringing in and out of Shaq’s ears and the toast airplanes worked for me. I thought those were some of the best parts of the film.

On the other hand WOW does the sound deliver for a mid 90s buddy comedy film. The chase scenes and CGI genie effects are particularly well backed up with swirling surround effects. I had to go back and listen to a few sections a second time to make sure I was really listening to something that good.

But the music is terrible, and the rap lyrics are universally goofy. Shaq and Max’s duet is particularly bad.

4 trailers, including the one for Kazaam itself and also I’m gonna git you sucka!

Not even an inch of effort here. 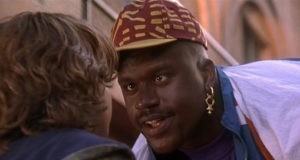 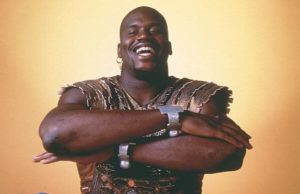 Kazaam didn’t work for me overall but the CGI effects were a bit of fun and it’s one of the best sounding surround tracks from the mid 90s, so it’s not all bad. For those who grew up loving it there isn’t a whole lot to hang your hat on in this suuuuuper bare bones release from Kino, but it’s also available out the gate for under 18 bucks. To you I say “Don’t get all hysterical! Say thank you for your miracle!”

Is this new to bluray?

I'm not sure if there were previous releases by others, it seems to be first for Kino. Amazon only lists this one! Looks like there was a DVD tho.
https://www.amazon.com/Kazaam-Blu-r...&qid=1541004143&sr=8-1&keywords=kazaam+bluray

LMAO at the comments, the 2nd most recent comment is about the VHS tape =)

Apparently, there are still people collecting VHS tapes. Some collect LONG out-of-print material, but apparently it also applies to things that are still in print or at least still available to buy at normal prices. Don't ask me why; I guess it's the nostalgia, and the studios are catching on to it in the most creative ways.

https://www.youtube.com/watch?v=UdgOAfA57rM
You must log in or register to reply here. 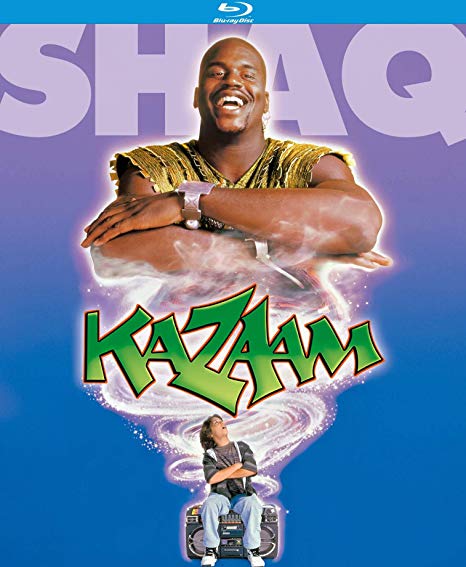