Better than expected, but that's not saying much.... 4 Stars

Steppenwolf (Ciarán Hinds) arrives on Earth, in search of three boxes known as Mother Boxes, which, when combined, can destroy and retransform the Earth. Batman (Ben Affleck) and Wonder Woman (Gal Gadot) team up and recruit other’s with abilities, including The Flash (Ezra Miller), Cyborg (Ray Fisher), and Aquaman (Jason Momoa). After their first encounter with Steppenwolf, they realize their going to need some more help. Having the third Mother Box in their possession, they attempt to resurrect Superman (Henry Cavill) as a last resort.

I could go into more detail, but that is the basic plot of Justice League, which works to a satisfactory degree thanks to its brisk running time and occasional infusion of humor, although the story and character developments often feel rushed. What really works against the film is the studio’s decision to reverse-engineer its DC movie universe, giving us very brief introduction and back story to the three new characters introduced in this film – Aquaman, The Flash, and Cyborg – each one getting their own origin story over the next few years. Realistically, we have only seen two origin stories thus far – Man of Steel (Superman) and Wonder Woman, with Batman only featured prominently in Batman vs. Superman and guest-starring in Suicide Squad­, two films that I found to be quite boring and drawn out (actually, I felt the same about Man of Steel). It doesn’t help that Justice League tries too hard to be a DC-equivalent to Marvel’s The Avengers, not only with this dysfunctional group trying to get along in order to save the planet, but that the Mother Boxes are almost spitting images of the Tesseract from the Marvel Cinematic Universe. Bringing in Joss Whedon, who was very much a part of setting up the MCU (in addition to wrting and directing the first two Avengers movies), to write the screenplay and take over directing the studio-imposed reshoots from original director Zack Snyder, just makes the similarities even more glaring. The villain, Steppenwolf, is not all that well-developed, both as a character and in his CGI design, giving esteemed character actor Ciarán Hinds not a whole lot to do in his performance capture suit other than chew scenery. The highlights, though, are Gal Gadot as Wonder Woman/Diana Prince, Jason Momoa as Aquaman, and Ezra Miller (doing a good Woody Allen impression) as The Flash/Barry Allen, each having some truly fun and humorous moments in the film. Henry Cavill even gets to have some fun near the end of the film as Superman, challenging The Flash to various contests.

Justice League was shot primarily on 35mm film stock in Super 35, with additional footage captured at up to 5K resolution using Arri Alexa 65 and XT cameras, then completed as a 2K digital intermediate and graded using Dolby Vision high dynamic range. Warner has upscaled the image to 2160p and applied both Dolby Vision and HDR10 high dynamic range for this UHD Blu-ray release (I viewed the film with HDR10, as my equipment is not Dolby Vision capable). The result is a noticeable improvement over the already exceptional 1080p Blu-ray. Colors are more vibrant, especially blues and reds, with the costumes of Batman and The Flash benefitting the most with varying shades of blacks and reds, respectively. Contrast is much stronger, with deep blacks and strong shadow detail, allowing for textures in Batman’s costume to be seen even in some of the darkest sequences. Detail and Clarity also get a major boost, from Superman’s faint beard stubble to the more worn spots in Wonder Woman’s armor and extending to the rock and stone textures of the tunnel under Gotham City. Organic film grain is retained and even the simulated grain appears organic and natural in some of the digitally captured shots (so much so that you can’t easily distinguish them).

Justice League has a reference-quality Dolby Atmos track, although you will have to navigate the Audio menu and select it, as the disc defaults to a redundant DTS-HD MA 5.1 track (as does the included Blu-ray). This is a very immersive track, with heights used to enhance flyovers by the Parademons, rainfall, Danny Elfman’s score, etc. and extending to the rear surrounds. LFE is used heavily to accentuate explosions and other room-shaking effects, adding a nice low-end overall to the film. Dialogue is clear and intelligible throughout, well-prioritized and never getting lost in the mix of effects and music.

On a film that was plagued with production problems and studio tinkering, it’s a surprise the studio included any special features, which can be found on the included Blu-ray edition.

The Return of Superman (1080p; 2:01): The Bonus Scenes Not Seen In Theatres that the sticker on the front of the slipcover is referring to. Superman decides which costume to wear after being brought back to life, and then drops in on Alfred (I assume to find out where the Justice League ran off to).

Road to Justice (1080p; 14:07): DC comic creators explore the history of Justice League, from the page to the small screen to the big screen.

Heart of Justice (1080p; 11:48): The cast and crew discuss and share their admiration for the iconic Trinity: Batman, Superman, and Wonder Woman.

Justice League: The New Heroes (1080p; 12:22): Join Ray Fisher (Cyborg) on a personal tour to meet the newest members of the Justice League: Aquaman, The Flash, and Cyborg.

Steppenwolf: The Conqueror (1080p; 2:59): Join actor Ciarán Hinds and the filmmakers as they reveal the story behind mankind’s ancient enemy and the Justice League’s greatest challenge.

Scene Studies (1080p; 15:16): Take a closer look at the filmmaking process behind Justice League’s most visually exciting and action-packed sequences. Viewable individually or as one featurette: Revisiting the Amazons, Wonder Woman’s Rescue, Heroes Park, and The Tunnel Battle.

Suit Up: The Look of the League (1080p; 10:20): Designer Michael Wilkinson explores the innovation and artistry that goes into creating the costumes for DC’s iconic heroes.

I had low expectations for Justice League due to previous DCEU films (Wonder Woman excluded), news of extensive reshoots under a different director, and bad word of mouth. My expectations were exceeded, resulting in a fun but forgettable movie that felt like an Avengers clone. Video and Audio are excellent, helping to boost the overall score.

I have heard from trusted friends that this is a pretty good one except for the notoriously bad cgi on Superman/Cavill’s mustache.
Picked up a 3D copy this morning a Best Buy- we shall see .

Mine is due in from Amazon this week. Not happy about the runtime, feel it should have been longer with everything they seem to have going on (I have not seen it yet).
Reactions: Tino

I avoided this in the theaters, mostly due to disappointment with Batman V Superman, but enjoyed it a lot more than I thought I would. The villain is a bit plain vanilla, but the character dynamics were a lot more enjoyable than I expected.
Reactions: Richard V, Robert Crawford and Todd Erwin

Ken_McAlinden said:
I avoided this in the theaters, mostly due to disappointment with Batman V Superman, but enjoyed it a lot more than I thought I would. The villain is a bit plain vanilla, but the character dynamics were a lot more enjoyable than I expected.
Click to expand...

IMO, this film got a bad rap and I thoroughly enjoyed it.
Reactions: Richard V and Bryan^H

Agree with most of what's been posted. It was nice to see Clark portrayed as a more "human" character and even his suit looks "brighter and colorful", although wondering if this is just the HDR effect. Overall tone of movie was way more hopeful and positive than the "dark" vision that so many people griped about. Also way more humorous moments in the film, especially by Flash/Ezra Miller. Thumbs definitely up.

Update on the Digital Copy: I redeemed my code on Vudu on Tuesday, after I had connected my FandangoNow account to Movies Anywhere. This gave me 4K versions on Vudu, Google Play Movies, and FandangoNow, and HD on Amazon Video.
You must log in or register to reply here. 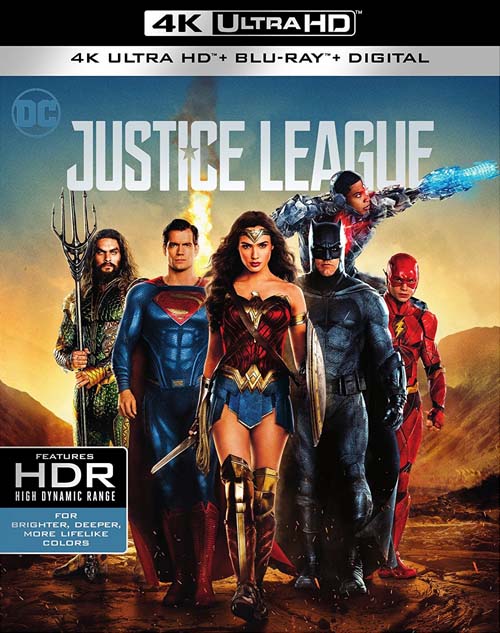