Epic scale to the conclusion of the continuity of the DC Universe Animated Movies line 3.5 Stars

Justice League Dark: Apokolips War sees the major players of the DC Universe face off in their final battle against Darkseid and his parademons  in a film that concludes the existing continuity of the DC Universe Animated Movies line.

Things do not go well for the Justice League or the planet Earth after Darkseid soundly defeats the world’s greatest heroes and harvests magma from the Earth’s core.  Superman’s powers are neutralized permanently by Kryptonite, Batman is brainwashed to become Darkeid’s advisor, and Wonder Woman becomes a warrior in service to Apokolips.  Several years later, the remnants of the Justice League teams up with the Teen Titans and the Suicide Squad to bring the battle to Darkseid at long last.
Real life couple Jerry O’Connell and Rebecca Romijn reprise their roles as Clark Kent and Lois Lane from other DC Universe animated films, with Matt Ryan again voicing John Constantine.  The voice cast also includes Rainn Wilson(Lex Luthor), Tony Todd(Darkseid), Taissa Farmiga(Raven), Jason O’Mara(Batman), Rosario Dawson(Wonder Woman, Shemar Moore(Cyborg), Christopher Gorham(Flash), and John DiMaggio(King Shark).  The original comic book storyline is adapted for this film by Mairghread Scott(Wonder Woman: Bloodlines) and Ernie Altbacker(Batman: Hush).
This film is intended to be the final film in the loosely connected continuity of the DC Universe Animated Movies line.  (Future releases will apparently reboot continuity to tell new stories that are not constrained by what has happened in earlier DC animated films.)  Justice League Dark: Apokolips War is a direct sequel to Justice League Dark(2017).  Although enjoyment of this new film does not depend upon seeing the earlier film, the screenplay assumes the viewer understands superhero fandom shorthand:  for example, when Barry Allen proposes another “Flashpoint” to resolve difficulties, the screenwriters assume that the viewer understands the meaning of this.  If one has never heard of “Flashpoint”, then it is helpful to understanding that this is roughly the equivalent of Superman defeating the barriers of time to turn back the clock and save the life of Lois Lane in Superman: The Movie.  In this respect, Justice League Dark: Apokolips War plays directly to the audience that has seen the previous films and understands their progressing history and continuity.
The inherent flaw in having the deus ex machine of a “Flashpoint” as a tool to undo tragic events is that it sucks all of the drama and suspense out of the jeopardy and even demise of the characters.  If we can do another “Flashpoint” every time our heroes lose a battle, then the ultimate outcome of good prevailing over evil is even less in doubt than it would be otherwise in the genre of films in which a happy ending is expected.  The transition of Batman from strong-willed hero to Darkseid’s henchman does not really ring true.  In the commentary, the creators discuss their intentions in forcing this dramatic turn, but unfortunately this development is explained better in the commentary than it is in the screenplay.
Justice League Dark: Apokolips War is rated R for screen violence and language, which rules out the preteen audience.  The four letter words and occasional dismemberment of a beloved character fail to elevate the drama, even more so when our expectations are fulfilled that the deaths of certain heroes are merely interludes before their inevitable resurrections.  Justice League Dark: Apokolips War will probably reward viewers having seen all of the earlier films, but anyone else may feel lost in the continuity and underwhelmed by the level of the stakes(the world hangs in the balance, but we can just turn back time if we lose).

Justice League Dark: Apokolips War appears on blu-ray in a 1.78:1 screen aspect ratio.  The animation design favors vibrant colors and fine line-work, and thes qualities translate well to this Dolby Vision HDR transfer on UHD disc.  The color design does not necessarily challenge the limits or specifications of HDR, but the transfer certainly appears flawless for what it is.

The English DTS-HD 5.1 audio track is flawless if unexceptional.  Dialogues is always intelligible in the mix.  The score by Robert J. Kral(Batman: Hush) is served well by the audio mix, and the original score elevates the drama of the film.  French and Spanish audio are available in Dolby Digital 5.1.

Special features are located only on the Blu-ray disc, not the UHD disc, and include all of the following:
DC Showcase: Adam Strange(16;05):  Adam Strange(Charlie Weber) reveals his true identity on an asteroid mining colony.
Darkseid: New God/Classic Evil(14:57):  Featurette discussing the history of Darkseid from his original creation by Jack Kirby in The New Gods to his evolution as an ultimate villain to the present day.
Audio commentary:  Executive producer James Tucker, co-directors Matt Peters and Christina Sotta, and screenwriter Ernie Altbacker provide an informative feature-length commentary.
A Sneak Peek at DC Universe’s Next Animated Movie, Superman:  Man of Tomorrow(8:35):  Behind the scenes talent preview the next DC animated film that goes back to Clark Kent’s first days in Metropolis.
A Preview of Justice League Dark(8:14):  Featurette discussing this “Dark” version of the Justice League fronted by John Constantine in Justice League Dark(2017).
A Preview of Batman and Harley Quinn(9:07):  Sneak peek to the past revealing highlights of Batman and Harley Quinn(2017).
From the DC Vault:  “Zombie King” episode of Justice League Action(11:21).  This episode is designed for all ages and aimed at a younger audience than the main feature.
From the DC Vault:  “Abate and Switch” episode of Justice League Action(11:20).
From the DC Vault:  “Nevermore” episode of the Teen Titans(21:40).  This episode, like the episodes of Justice League Action, is aimed at a younger audience than the main feature.
Trailers(5:57):  Trailers for Birds of Prey: Harley Quinn(2020), Superman: Red Son, and Wonder Woman; Bloodlines play on this selection.
Trailers for Wonder Woman 84 (2:32) and Mortal Kombat Legends: Scorpion’s Revenge (1:39) play by default at the beginning of the Blu-ray disc.
Also included is the film on DVD and a paper insert for digital download of the film via the Movies Anywhere app.

Justice League Dark: Apokolips War is a serviceable conclusion to the storyline begun in previous films of the DC Universe Animated Movies line.  The video and audio presentation on 4K UHD disc serve the film well.  The special features are very nice, and the feature length commentary, in particular, is worth checking out for additional insight into the story.  The story in Justice League Dark: Apokolips War may not entirely live up to its intentions, but it is an interesting conclusion to the continuity established in previous films, even as it caters more to hardcore fans than casual viewers.
https://www.amazon.com/Justice-League-Dark-Apokolips-Blu-ray/dp/B07Y9BWCLW/ref=sr_1_2?crid=KU7E6JYYQK18&dchild=1&keywords=justice+league+dark+apokolips+war&qid=1590550630&sprefix=Justice+L%2Caps%2C210&sr=8-2
Post Views: 880 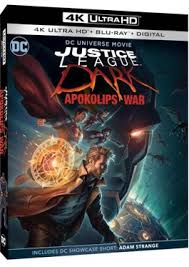