Forum List What's new Dark Style Change width
Log in Register
What's new Search
Menu
Log in
Register
Navigation
Install the app
More options
Dark Style
Close Menu
Posted on September 18, 2018 by Todd Erwin
You are using an out of date browser. It may not display this or other websites correctly.
You should upgrade or use an alternative browser.
Fun but forgettable ride 4 Stars

As ridiculous as it is, Jurassic World: Fallen Kingdom is more like a two-hour amusement park ride, fun and thrilling while it lasts, but rather forgettable once the ride is over.

Rescue op. Save the dinosaurs from an island that is about to explode. What could go wrong? – Owen Grady (Chris Pratt)

That line pretty much sums up Jurassic World: Fallen Kingdom the fifth film in the Jurassic Park and second in the Jurassic World franchises. Shortly after the Jurassic World theme park was forced to close down due to the dinosaurs pretty much taking over the park, a volcano on Isla Nublar has become active, threatening an extinction-level event on the island. Benjamin Lockwood (James Cromwell) and his assistant Eli Mills (Rafe Spall), who are now responsible for the financially strapped Masrani Global, already have a team of mercenaries on the island, lead by Ken Wheatley (Ted Levine), and dispatches Claire Dearing (Bryce Dallas Howard) and Owen Grady (Chris Pratt) to the island so that Claire can activate the location trackers in the dinosaurs and Owen can help trap Blue, his prized trained velociraptor. The plan is to evacuate the dinosaurs to a remote island as a nature preserve and allow them to flourish untouched by man. As one expects in the Jurassic movies, things do not go as planned, as someone has a hidden agenda to thwart that plan. That person, which comes to no surprise in the film, is Eli Mills, who plans to hold a secret auction to sell off the dinosaurs in order to finance the company’s research in weaponizing their genetically modified creations to earn even more money at a later auction.

The Jurassic series has always asked its audience to buy in to some sort of scientific theory, and Jurassic Park novelist Michael Crichton originally asked us to believe that cloning and genetic modification were possible, even with incomplete DNA. The screenplay for Jurassic World: Fallen Kingdom by Colin Trevorrow and Derek Connolly asks much more from its audience, such as creating new species (something touched upon in the previous film), but this time as potential weapons with trained cues genetically imprinted on the animals. That is one of many suspensions of disbelief asked upon the audience, but comes much later in the story that you just have to go with it. The movie also tries to ask some serious questions, such as global warming and whether genetically created and previously extinct creatures really animals and deserving of preservation, but the movie itself is so over the top that the preaching doesn’t feel all that serious. Jurassic World: Fallen Kingdom is more akin to a two-hour amusement park ride, fun and thrilling wile it lasts, but ultimately forgettable shortly after it ends.

Jurassic World: Fallen Kingdom is the first in the series to be shot in the 2.39:1 aspect ratio. The movie was captured in 6.5k and 3.4k resolutions on Arri Alexa 65 and Mini cameras, then completed as a digital intermediate at an unspecified resolution (although with all of the visual effects work, I suspect it was finished at 2k), with Dolby Vision HDR added for some of its theatrical exhibitions. Universal’s 4K UHD Blu-ray features a h.265 encode at 2160p with both Dolby Vision and HDR10 high dynamic range. Viewing the movie on equipment only capable of HDR10, the result is very cinematic. Colors are vibrant and consistent with no visible banding whatsoever. Contrast is excellent, providing deep inky blacks that retain strong shadow detail and bright whites that never clip. When comparing to the included Blu-ray edition, the UHD can appear much darker, while blacks on the Blu-ray often appear as dark grey.

Both the 4K UHD Blu-ray and Blu-ray editions include the same excellent DTS-X track. This is a reference-quality track, offering strong LFE throughout, as well as taking full advantage of all capable speaker channels. I viewed the movie on a 5.1.2 configured speaker layout, and it truly rocked the room. Dino roars often pierced the room in sonic clarity, and their stampede nearly vibrated the floorboards loose. Heights are used to great effect, providing a fully immersive experience, while dialogue remained clear and understandable throughout.

This may be a first for Universal, but all of the extras have been included on the 4K UHD disc as well as the included Blu-ray edition.

The Kingdom Evolves (2160p; 4:33): How Fallen Kingdom fits in to the entire Jurassic franchise.

Monster in a Mansion (2160p; 3:06): Director J.A Bayona discusses some of the influences he used in a key scene.

VFX Evolved (2160p; 7:08): A look at the visual effects and how they have changed since the first film, Jurassic Park.

A Song for the Kingdom (2160p; 1:26): Justice Smith, who plays computer whiz Franklin Webb, performs a song during some downtime on set.

Jurassic Then and Now – Presented by Barbasol (2160p; 3:06): A montage of clips from all five Jurassic films so far.

Interactive Baby Blue: Scan the insert using Facebook Messenger and the camera on your smart phone, and you can send and post pictures of yourself or your friends with Blue the velociraptor.

Digital Copy: An insert contains a code to redeem a digital copy on Movies Anywhere. When I redeemed my code, I received UHD versions on Vudu, Google Play Movies, and FandangoNow, HD on Amazon Prime Video. I do not own an Apple TV or an XBOX One so cannot confirm the resolutions on iTunes and Microsoft Movies, respectively.

Jurassic World: Fallen Kingdom is a fun ride, but full of empty calories. The 4K UHD provides an excellent video and audio presentation, and it is really nice to see the studio include all of the special features on the UHD disc.

Is there any bass to the roars in this film? That's always been a major disappointment for me in most of these films, that the tyrannosaur roars and other large animal sounds don't seem to engage the subwoofer.

I watched the DVD of The Ghost and the Darkness a few weeks back, and the growls of the lions were really noticeable in the sub. Giant dinosaurs, not so much.

But my 3D blu arrived yesterday, so I guess I'll find out shortly.

I somehow haven't ordered this yet, will have to grab a copy. I liked it in the theater, but agree it's pretty empty. Definitely lags once they get to the mansion, there's no timer running the melodrama! If it's got Dinosaurs and Atmos I am all for it tho. Wait, what? DTS:X only? Bleee.

Rather than define a fixed number of channels, one for each speaker, DTS:X allows the "location" (direction from the listener) of "objects" (audio tracks) to be specified as polar coordinates. The audio processor is then responsible for dynamically rendering sound output depending on the number and position of speakers available. Dolby Atmos uses a similar technique, although the speaker layout employed by cinema DTS:X is the sum of Dolby Atmos and Auro-3D.
Click to expand...

On sale at Amazon for $19.99, probably price-matching somebody like Best Buy.
You must log in or register to reply here. 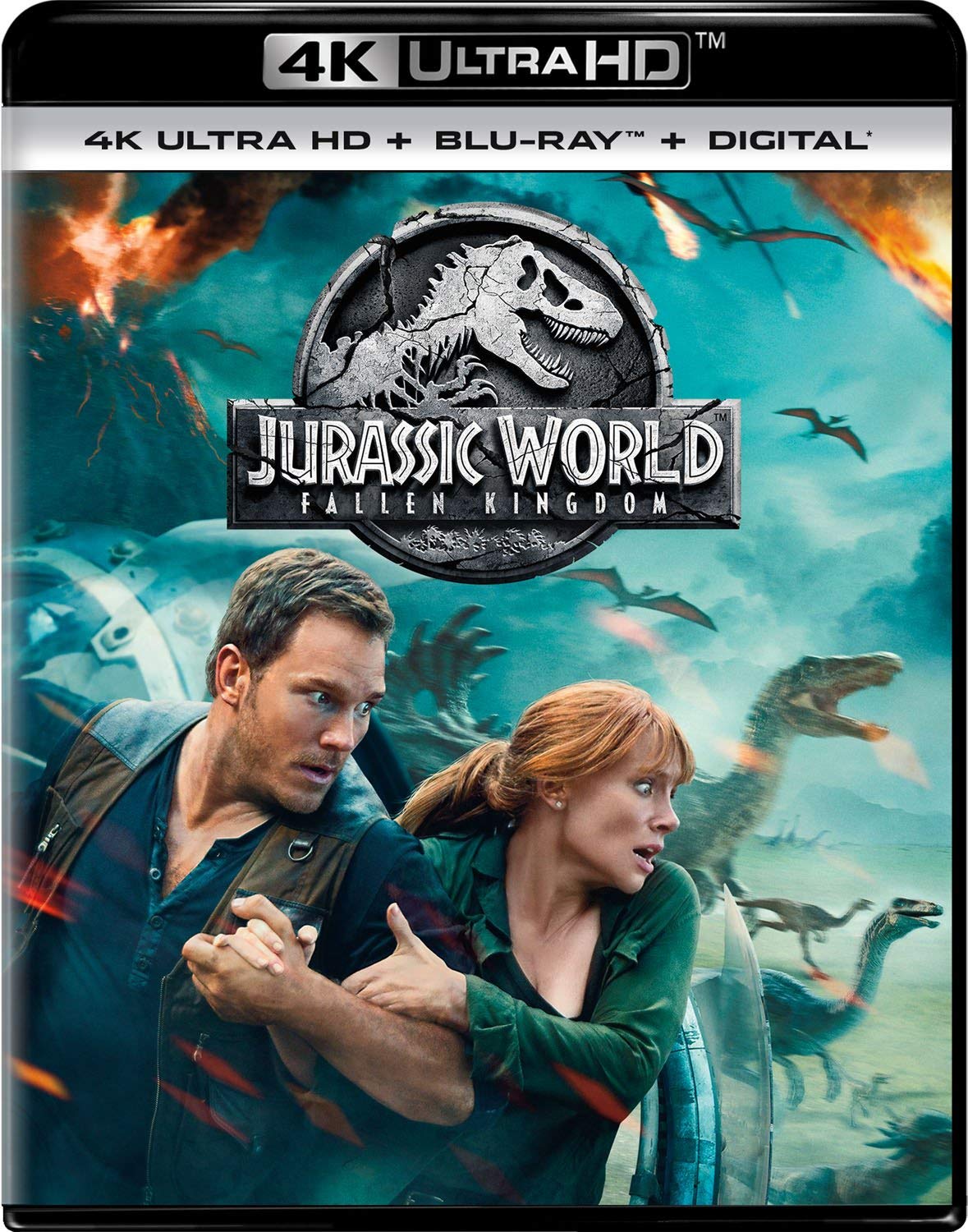