Hollywood lore has it that when Steven Spielberg optioned Michael Crichton’s screenplay for what would eventually become the hit television series ER, Spielberg became more interested in the novel Crichton was writing at the time, Jurassic Park, delegating ER to a series pilot and elevating Jurassic Park to a future Spielberg film. Both would go on to be groundbreaking, with ER lasting 15 seasons at or near the top of NBC’s most popular shows launching the careers of George Clooney, Noah Wyle, Goran Visnjic, Eriq La Salle, among many others, while Jurassic Park would help Spielberg reclaim the top spot on the all-time box office chart (at least for a few years) and change the visual effects industry forever, realistically (for its time) blending practical animatronic creatures with computer-generated animation, while at the same time introducing movie audiences to a new (and more cost-effective) multi-channel digital sound system, DTS. As legendary make-up and creature effects designer notes on the Jurassic Park III audio commentary, each film would become the research and development for the effects of the next film in the franchise, furthering the technology and making the transition on-screen from practical to CG more and more seamless.

Jurassic Park follows the Michael Crichton novel fairly closely – an accident occurs on the fictional Costa Rican island Isla Nublar where bio-engineering company InGen is constructing a theme park. The company’s CEO, John Hammond (Richard Attenborough), sends a team of scientists, including paleontologist Dr. Alan Grant (Sam Neill), paleobotanist Dr. Ellie Sattler (Laura Dern), and chaos theorist Ian Malcolm (Jeff Goldblum) to inspect and hopefully endorse the theme park which showcases cloned dinosaurs in a “natural” habitat. Also along for the ride are Hammond’s niece Lex (Ariana Richards) and nephew Tim Murphy (Joseph Mazzello) and InGen lawyer Donald Gennaro (Martin Ferrero). As one would expect, the tour does not go as planned, thanks to a tropical storm that knocks out all power to the island and allowing the dinosaurs to roam free from their enclosures, as well as some industrial espionage involving the smuggling of dino embryos off the island by computer programmer Dennis Nedry (Wayne Knight). Jurassic Park shares many similar qualities of Spielberg’s first success, Jaws. At their cores, they are adventure films with elements of horror, and the director shows that, 18 years later, he still knows how to shock us preceded by a good laugh to relieve the tension.

With the tremendous box office success of Jurassic Park, Universal commissioned a sequel, The Lost World: Jurassic Park, with Spielberg returning to direct this next installment. Although Crichton’s second novel shares the same title, Spielberg’s sequel is an extremely loose adaptation, using the primary plot of a second island as a wildlife preserve and a few key sequences from the novel, while using many ideas from the first book that were fan favorites that didn’t make it in the first film. Much like the first film (and subsequent sequels), an accident has occurred, this time involving a wealthy family trespassing on the shore to enjoy a picnic lunch only to almost become lunch themselves, John Hammond (Attenborough) discretely hires a team, led by Ian Malcolm (Goldblum) to travel to the preserve on Isla Sorna to document the prehistoric animals before InGen’s new CEO and Hammond’s older nephew Peter Ludlow (Arliss Howard) and his team arrive to exploit the animals to open a new theme park in San Diego. Joining Malcolm’s team are girlfriend and behavioral paleontologist Sara Harding (Julianne Moore), documentarian Nick Van Owen (Vince Vaughn), field equipment expert Eddie Carr (Richard Schiff), and Malcom’s stowaway daughter Kelly (Vanessa Lee Chester). While The Lost World may have more action, more dinosaurs, and more jaw-dropping visual effects (plus a terrific Max Steiner-inspired score by John Williams), it lacks a cohesive story that eventually goes off the rails with its preposterous third act of a rampaging T-Rex though the city streets and neighborhoods of San Diego (but is actually Burbank) that director Spielberg brought in to production at the last minute, despite warnings from his fellow producers and screenwriter David Koepp. Regardless, The Lost World was one of the top box office draws in the summer of 1997, and Spielberg would include much of this film’s cast in his next film, Amistad, which was released later that year.

Another four years, and time for another installment. Jurassic Park III is a much leaner and shorter film, following the same basic formula. Ben Hildebrand (Mark Harelik) and his girlfriend’s son, Eric (Trevor Morgan) crash land on Isla Sorna after a paragliding accident. The boy’s divorced parents, Paul (William H. Macy) and Amanda Kirby (Tea Leoni) trick paleontologist Dr. Alan Grant (Sam Neill) and his assistant Billy (Alessandro Nivola) into thinking they are providing a narrative fly-over tour of the island, until they actually land and the flight crew turns out to be a team of mercenaries hired to locate Ben and Eric. Joe Johnston (The Rocketeer, Captain America: The First Avenger) takes over directing duties from Steven Spielberg (who remained as Executive Producer), and the result is a more cohesive story than the previous installment, moving at a much brisker pace by essentially killing off nearly half of its main cast in the first 30 minutes. The blending of CG and practical is virtually seamless, particularly in one sequence where you can’t tell which of the three velociraptors on screen are life-size puppets or CG (the audio commentary gives it away). Jurassic Park III is a 90 minute adrenalin-filled thrill ride.

For nearly fourteen years, a proposed fourth film had been in various stages of development, even naming producer Kathleen Kennedy as director at one point (according to a now-defunct placeholder on IMDB). In 2015, Universal and Steven Spielberg decided to effectively reboot the franchise with Jurassic World, bringing in Colin Trevorrow to direct from a script he co-wrote with Derek Connolly, Rick Jaffa and Amanda Silver. Two brothers, Zach (Nick Robinson) and Gray Mitchell (Ty Simpkins) are sent by their soon to be separated parents to the Jurassic World theme park on Isla Nublar to visit their workaholic Aunt Claire (Bryce Dallas Howard), the park’s operations manager, over Christmas vacation. Claire is too busy negotiating a new attraction sponsorship and has her assistant Zara (Katie McGrath) guide them around the park. The attraction Claire is working on is a new genetically engineered dinosaur created by Dr. Henry Wu (BD Wong), the Indominus Rex. As fate would have it, nature finds a way, and Indominus escapes. However, Dr. Wu has unknowingly endowed this new creation with the ability to camouflage itself thanks to splicing in some cuttlefish DNA. Velociraptor trainer Owen Grady (Chris Pratt) is brought in to help track down Indominous by InGen head of security Vic Hoskins (Vincent D’Onofrio). Apparently, in the 22 years since Jurassic Park, InGen has failed to learn from its mistakes. Jurassic World is a serviceable reboot, bringing the series into a more modern age while also making a statement on corporations and how theme parks try desperately to stay competitive and make that next new attraction bigger and better than the last one. Trevorrow almost risks biting the hand that feeds him with Jurassic World, considering the massive theme park wars currently under way in Orlando, Florida (home of three Universal parks, five Disney World parks, three SeaWorld parks, LegoLand, plus many lesser theme parks). The film also cemented Chris Pratt as a bankable movie star after Guardians of the Galaxy the previous summer.

All three Jurassic Park movies were shot on 35mm film stock and completed on 35mm film with a theatrical aspect ratio of 1.85:1. Jurassic World was shot on 35mm and 65mm film, then completed as a 2.4k digital intermediate with a theatrical aspect ratio of 2.0:1 (according to IMDB). It is those first three films that benefit the most, as these are new 4K scans from the completed film elements with HDR10 color grading. Detail is much sharper with no need for edge enhancement that mildly plagued the original Blu-ray releases. Colors are more natural, while contrast delivers deep blacks and crisp whites (the Blu-rays had, at best dark milky greys). The 2160p upscale on Jurassic World is no slouch, either, with more natural and vivid colors, more controlled contrast, and slightly heightened details.

All four films now sport an object-based DTS:X track (DTS-HD MA 7.1 compatible) that will knock your socks off, with the original Jurassic Park benefitting the most with better dialogue prioritization than its Blu-ray counterpart. LFE is bolder and more pronounced without being overly boomy on all films, and overall the tracks are more spacious with more naturally placed discrete sounds within the listening area.

The Jurassic Park Phenomenon:  A Discussion with Author Michael Crichton (480i; 15:27)

Storyboards (1080p): Six sequences including Stego Attack, The Round Up, Eddie’s Death, Death in the Waterfall, Malcolm vs. Raptor, Sarah Harding vs. The Raptors, Getting the T-Rex Off The Island, The Cargo Ship Sequence, The T-Rex Visits San Diego, The Revenge of the T-Rex, Omitted Air Attack, and The Original Ending.

Digital Copies: An insert contains codes to redeem digital copies on Movies Anywhere. I redeemed my codes on Vudu and received UHD versions on Vudu, FandangoNow, and Google Play Movies, and HD on Amazon Prime Video.

The first three films in particular benefit the most from these new 4K transfers, appearing in true native 4K for the first time, and the new DTS:X object-based tracks on all four films are spectacular. 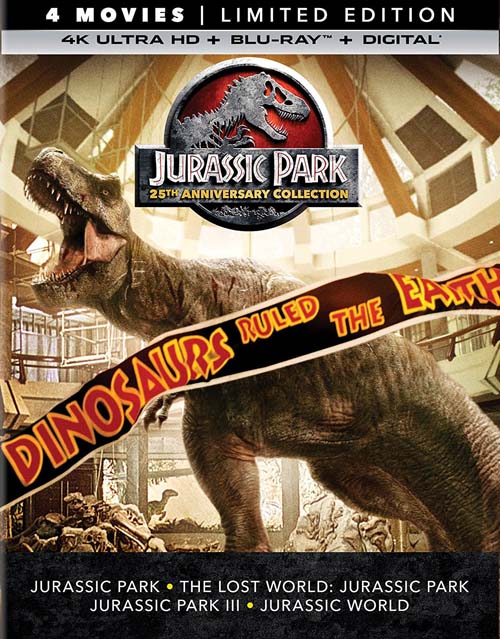