Fun ride, but not for the entire family 4.5 Stars

Nearly decades in the making, Jumanji: Welcome to the Jungle was a smash at the holiday box office and arrives on 4K UHD Blu-ray with excellent audio and video from Sony Pictures Home Entertainment.

Four teens are sent to detention – geek Spencer (Alex Wolff) and jock Fridge (Ser’Darius Blain) for selling and buying term papers, Bethany (Madison Iseman) for taking calls on her smartphone during a test, and Martha (Morgan Turner) for mouthing off in gym class. The principal tasks them with cleaning out a storage room to make way for a computer lab. Included in the pile of junk is an old game console with the cartridge for the game Jumanji already installed. Bored and unsupervised, the four students connect the game console to an old TV, chose their avatars, and before they know it are whisked into the game console and quickly find themselves in the bodies of their avatars in the middle of the jungle. Spencer has assumed the identity of archeologist and adventurer Dr. Smolder Bravestone (Dwayne Johnson), Fridge as zoologist Franklin “Mouse” Finbar (Kevin Hart), Martha as “killer of men” Ruby Roundhouse (Karen Gillan), and Bethany as cartographer (and “curvy” genius) Dr. Shelly Oberon (Jack Black). The game’s tour guide, Nigel (Rhys Darby) explains the plot of the game to them, that they must return the “Jaguar’s Eye,” a gem that gives explorer John Hardin Van Pelt (Bobby Cannavale) power to control the animals in Jumanji, to the jaguar statue at the top of a mountain before Van Pelt finds them and call out “Jumanji” once the task is complete. They are later joined in their expedition by pilot Jefferson “Seaplane” McDonough (Nick Jonas), who is another young player named Alex who has been trapped in the game for 20 years.

Sony has been trying to get a sequel to the Robin Williams 1995 hit, Jumanji, and after decades of false starts, Jumanji: Welcome to the Jungle finally arrived in theaters for the 2017 Christmas holiday season, going head to head with Star Wars: Episode VIII – The Last Jedi and managed to keep up for several weeks, taking in just over $930 million worldwide ($400 million in the US), taking in ten times its estimated budget. And it is easy to see why. Director Jake Kasdan, better known for hard R-rated comedies like Walk Hard: The Dewey Cox Story, Bad Teacher, and Sex Tape, shows he has a knack for adventure comedies with this film (something he may have picked up from his father, who wrote Raiders of the Lost Ark and ironically is involved in story for the current Star Wars films), although parents should be warned there is some risqué humor – this is rated PG-13 for a reason. The film features some very fun action sequences that reminded me of the video game series Uncharted, yet keeps the laughs coming despite the casting of Kevin Hart, an actor I normally do not find even remotely funny, but it is the fact that he is playing a teenager playing a grown man that helps make his often juvenile responses actually funny. Dwayne Johnson is likable, as usual, adding a true sense of innocence to his character that pays off. Karen Gillan is also quite funny as the knockout Ruby Roundhouse being played by a mousy, shy teenager.

Jumanji: Welcome to the Jungle was captured at 3.4k resolution on Arri Alexa Mini cameras and completed as a 2k digital intermediate with Dolby Vision high dynamic range. Sony’s upscaled 2160p transfer has also been graded with both HDR10 and Dolby Vision high dynamic range. My equipment is only capable of HDR10, and the transfer is stunning. Colors are more natural and vivid, with heightened textures and deeper blacks that contains strong shadow details. While not exactly night and day compared to the still excellent 1080p Blu-ray, it is the jungle scenes, particularly the torch-lit night time battle near the end of the film, that really shines on the UHD version.

As usual, Sony has opted to include a Dolby Atmos track on the 4K UHD Blu-ray only, while the 1080p Blu-ray is downgraded with a DTS-HD MA 5.1 track. Both sound great, but as you would expect, the Atmos track wins hands down with deeper bass (those Jumanji drum beats literally rock the floorboards) and a more immersive experience. Jungle sounds surround the viewer in a 360° listening environment, the sounds of a player re-entering the game are directly overhead, and various other sounds flow smoothly and precisely during key action sequences. Dialogue is well-defined and prioritized without getting drowned out by music and effects.

All of the Special Features can be found on the included Blu-ray edition. These are pretty standard self-congratulatory featurettes, nothing really groundbreaking.

Journey Through the Jungle: The Making of “Jumanji” (1080p; 14:54): Hosted by Rhys Darby as his movie character Nigel, this is a rather by-the-numbers EPK-style look at the making of the film.

Meet the Players: A Heroic Cast (1080p; 7:08): The lead actors discuss their roles and those of their colleagues in the film.

Snapchat Codes: Two codes are available to scan for Snapchat users, one on the slipcover, the other on an insert. I installed Snapchat on my Android phone, gave these a test drive, and, honestly, I’m just not into using this app and it didn’t really thrill me. YMMV.

Digital Copy: A second insert contains a code to redeem a digital copy thru Movies Anywhere. I redeemed my code on Vudu, which gave me UHD versions on Vudu (with Dolby Atmos and HDR10/DolbyVision), FandangoNow (HDR10), Google Play Movies, Amazon Video, and Sony ULTRA, yet only HD on the Movies Anywhere app.

Jumanji: Welcome to the Jungle may have been a long time coming, but was likely worth the wait. This is a fun movie with repeatability, and the UHD delivers solid video and audio. 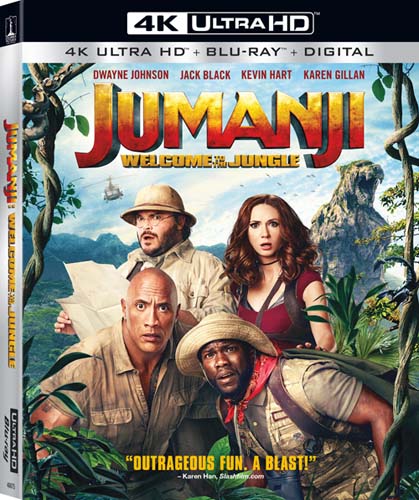