Forum List What's new Dark Style Change width
Log in Register
What's new Search
Menu
Log in
Register
Navigation
Install the app
More options
Dark Style
Close Menu
Posted on January 5, 2018 by Todd Erwin
You are using an out of date browser. It may not display this or other websites correctly.
You should upgrade or use an alternative browser.
Wonderful transfer 4.5 Stars

As a tie-in to the theatrical release of Jumani: Welcome to the Jungle, Sony has restored the 1995 original, Jumanji, starring the late Robin Williams, with a new 4K transfer and Dolby Atmos sound.

It is 1969 and Alan Parrish (Adam Hann-Byrd) is bullied by the neighbor hood kids, stealing his bicycle and beating him up. His father, Sam Parrish (Jonathan Hyde), who owns and runs Parrish Shoes, doesn’t know how to help his son, advising him to basically suck it up and take it as a man, threatening to send him to boarding school. Feeling dejected, Alan wanders on to a construction site and uncovers a board game just under a newly dug foundation, Jumanji. He takes it home, and after a fight with his father, is about to run away from home until Sarah Whittle (Laura Bell Bundy) knocks on the door to return his bike. They begin playing the board game, which foretells strange events just before they happen, as bats chase Sarah out of the house and Alan gets sucked into the game until another player rolls a five or eight.

Fast forward to 1995. Parrish Shoes has gone under after Sam has spent the family fortune searching for Alan, whom the town believes was murdered by his father, and has placed the town in bad straights. Nora Shepherd (Bebe Neuwirth) has just purchased the Parrish Estate, which has been unoccupied for years, and moves her recently orphaned niece, Judy (Kirsten Dunst) and nephew Peter (Bradley Pierce) in with her. Judy and Peter find the Jumanji board game in the attic and begin playing it, as giant mosquitoes and a hungry, roaring lion quickly appear in the house. Peter rolls a five on his next turn, and a much older and hairy Alan (Robin Williams) arrives to trap the lion in Nora’s bedroom. As mayhem ensues and the escaped animals run rampant in the town, the three discover that the only way for all of this to end is to find the adult Sarah (Bonnie Hunt), who has been traumatized by the events in 1969, and finish the game.

Jumanji was directed by Joe Johnston (The Rocketeer, Captain America: The First Avenger), who got his start in the business working at visual effects house Industrial Light and Magic as a storyboard artist. His experience with staging and planning visual effects combined with his knowledge of pacing are both a blessing and a curse to the film. The movie does move along at a brisk pace and Johnston succeeds where many directors have failed in keeping Robin Williams from becoming too frenetic. Where Jumanji falters is in the visual effects. Granted, CGI creatures where fairly new back in 1995, and many of the animals looked pretty good in the day. However, Johnston wanted those animals to appear slightly stylized and not entirely realistic or natural. And while that worked on the stampeding herd and to some degree on the lion, it completely fails on the band of monkeys, who never looked right even back in 1995. The integration of animatronics and CGI are less seamless now than they did then, and the breakthrough really wouldn’t happen until Johnston’s very under-appreciated Jurassic Park III. Williams does keep the movie together, and the rest of the cast, including Kirsten Dunst, Bonnie Hunt, Bebe Neuwirth, David Alan Grier, and even Jonathan Hyde (in a delicious double role as both Big Game Hunter Van Pelt and father Sam Parrish) all stand their own and deliver solid performances.

Sony turns in yet another winning 4K transfer of a back catalog title shot on film. The 2160p transfer was culled from the original 35mm negative and then enhanced with HDR10, providing more natural and even colors and more resolved contrast, all the while retaining the original film grain. Joe Six Pack may find the grain and muted color scheme distracting (and he has on some of the buyer reviews on Amazon), but this is pretty close to how I remember Jumanji looking when I saw it during its original theatrical run in 1995.

Sony continues to only provide Dolby Atmos on their UHD releases (and the included Blu-ray is a new release that is also sold separately but only has a DTS-HD MA 5.1 track), and the Atmos track included here is outstanding. The soundstage has been opened up immensely, with much more active surrounds and excellent use of the overhead channels with mosquitoes buzzing and water rushing overhead. Dialogue is also well-executed throughout all channels, providing a great sense of immersion. LFE is much stronger, too, particularly during the many stampede sequences. This is a reference-quality, demo-worthy track.

All of the Special Features can be found on the included 1080p Blu-ray, many of which have been ported over from previous home video releases.

Audio Commentary with the Special Effects Crew: Visual Effects Supervisor Ken Ralston leads the track, with assistance from Amalgamated Dynamics heads tom Woodruff, Jr. and Alec Gillis (who provided the animatronic effects) and others from the special effects team. The track is pieced together from various, individual recording sessions.

Sneak Peek of Jumanji: Welcome to the Jungle (1080p; 3:13): New to this release. A trailer that combines interviews with cast members of the new film. This may have been shown in theatres as part of their pre-show.

Gag Reel (1080p; 5:19): New to this release. Bloopers galore, sourced from what appears to be a personal VHS copy then badly upscaled to 1080/24p with major dropped frames and interlacing issues.

Deleted Scenes (1080p; 1:47): New to this release. Two scenes are provided, playable individually or together as one piece; The Company with Soul and Merry Christmas. These were sourced from what appears to be a personal VHS copy then badly upscaled to 1080/24p with major dropped frames and interlacing issues.

Making Jumanji: The Realm of Imagination (480i; 20:03): An EPK piece on the making of the film that was likely shown on HBO.

Bringing Down The House (480i; 3:09): Production Designer James Bissell discusses the creation and different versions of the Parrish Estate.

Digital Copy: An insert contains a code to redeem a digital copy on UltraViolet or Movies Anywhere retail partners. I redeemed on Movies Anywhere, which gave me HDX on Vudu and Amazon (not currently available in UHD at this time on either service), and 4K UHD on Google Play Movies and iTunes. Oddly, the title is not available on Sony’s ULTRA service.

Although not necessarily a classic, Jumanji is a fun family film, and Sony has delivered yet another great presentation of a catalog title.

This is a movie I purchased a long time ago on laserdisc and maybe even dvd and it was most likely on of the titles my former wife kept. So I have no problem after all this time buying it again on 4K blu-ray and it will be a big upgrade to what I used to own anyway. Once again Todd thank you for the review as it is very nice to know if a movie got a good transfer or not. I will be adding this title to my purchase list which will be on the lean side this year due to upgrading my receiver and maybe my rear speakers as well.

I received this for Christmas and thought it looked outstanding.

I hadn't seen the film in a few years. And while I agree the cgi/animatronics are a little dated and clunky in movement, they still worked really well for me. Especially the lion. You can see every hair in its mane, and when he roars the pink inside of his mouth really pops.

The overall color scheme may be muted, but there are bursts of wonder throughout, from the yellow poison flowers to Van Pelt covered in pastel house paint.

This is just a fun movie that looks spectacular in UHD.

Thanks for the review, Todd. I never upgraded my original DVD to BD, so I will eventually be upgrading this one to UHD. I expect the price to be under $15 at some point in 2018, though, so will be waiting for that to happen.

Thanks for the review. Really looking forward to checking out my disc. Never owned it on home video, but after seeing the new one with the kid, I thought we would all enjoy watching the original.

It does indeed look and sound spectacular.

And better in every way than the remake.

I watched this last night and couldn't agree more. Great release, and despite the often dated-looking CGI the film holds up extremely well. Would love to see more catalog titles treated like this on 4K UHD. I'll buy 'em.
You must log in or register to reply here. 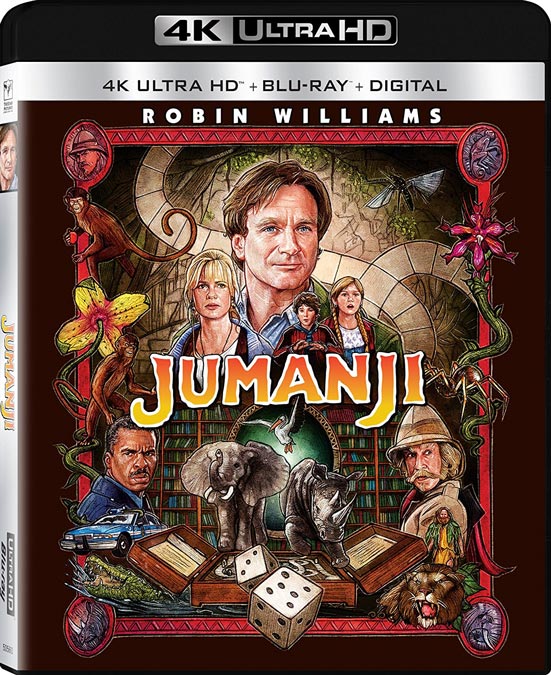