Jumanji: The Next Level returns our young heroes to the old-school video game, bringing two older characters (played by Danny DeVito and Danny Glover) along for the ride.

Our four intrepid young video game champions, Spencer (Alex Wolff), Martha (Morgan Turner), Bethany (Madison Iseman), and Fridge (Ser’Darius Blain) have all graduated from high school and gone their separate ways. Spencer and Martha’s attempt at a long distance relationship has caused them to “take a break,” and when the four friends return home for the holiday break, Spencer is nowhere to be found. Martha, Bethany, and Fridge decide to drop in on Spencer, and instead find Spencer’s grandfather, Eddie (Danny DeVito), recovering from a hip replacement surgery, and his former business partner and friend Milo (Danny Glover) arguing over breakfast. The three friends make their way down to the basement to discover that Spencer has re-assembled the Jumanji game and apparently got sucked back into that world in the process. The three friends re-activate the game, which then sucks Martha, Fridge, Eddie, and Milo into the land of Jumanji, leaving Bethany behind. The four adventurers, Bravestone (Dwayne Johnson), Mouse (Kevin Hart), Ruby (Karen Gillan) and Oberon (Jack Black) find themselves on a new quest, to retrieve the Falcon Jewel from evil conqueror Jurgen the Brutal (Rory McCann), in addition to finding Spencer and returning home. However, inside the bodies of Bravestone and Mouse are the aging Eddie and Milo, respectively, who have no idea what a video game is or what is going on, and Fridge has taken on the identity of map reader Oberon. Joining them on their quest are cat burglar Ming (Awkwafina) and old friend Seaplane (Nick Jonas).

Jake Kasdan has returned to the director’s chair, this time also co-writing the screenplay with Jeff Pinker and Scott Rosenberg, who have built upon the previous film by mixing up the avatars with some rather humorous results. While Dwayne Johnson does a fairly good Danny DeVito impression, it is Awkwafina who really nails and embodies DeVito’s mannerisms and speech patterns when Eddie switches avatars from Bravestone to Ming. Also very good is Kevin Hart, who is much more low-key and restrained like Danny Glover while Milo embodies Mouse. This is all played to great comedic effect for much of the film, and its two major action set pieces, the ostrich attack in the desert and the mandrill attack on the floating bridges, also bring some good belly laughs. The villain, Jurgen, is not well-developed and is never as menacing as he could have been. Jumanji: The Next Level is an enjoyable and fun two hours.

Jumanji: The Next Level was captured at 3.4K resolution on Arri Alexa Mini cameras, and with the short turn around time and effects work, I’m assuming was completed as a 2K digital intermediate in the 2.39:1 theatrical aspect ratio with Dolby Vision HDR for its premium engagements. Sony’s 2160p transfer has been IMAX-enhanced, opting for HDR10 as the sole high dynamic range format on this release. There is a noticeable increase in detail, particularly the grains of sand in the desert, fabric textures, and facial features, although it does reveal a few CGI-related shots that were possibly rendered at 2K. Where this disc really steps up to the plate is in color grading and black levels. The luscious foliage during the jungle sequence early on look much more natural on the UHD disc with much wider gradations of greens while on the 1080p Blu-ray they appear much more yellow. Black levels are deep, revealing tremendous shadow detail during some of the darker sequences.

The DTS:X track on the UHD disc is a well-balanced and aggressive mix. Heights are often implored when characters are reincarnated and re-enter the game (they are quite literally dropped in from the sky). Surrounds are very active, particularly during the more involved action sequences. LFE is strong, adding support to the Jumanji drum beats as well as explosions and the occasional rock song. Dialogue remains clear and well-prioritized throughout.

The UHD disc contains no extras whatsoever, with all of the special features appearing on the included Blu-ray edition.

Body Swapping: Snapping into Character (1080p; 5:30): An EPK fluff piece on mixing up the avatars this time around.

Back Together: Reuniting the Cast (1080p; 4:05): The cast discusses coming back to work on the second movie in another EPK fluff piece.

Creating the Scene (1080p; 12:20): A behind the scenes look at two key effects sequences – Ostrich Chase and Mandrill Bridge.

Rhys Darby Wants to Jingle (1080p; 2:22): The actor who plays game host Nigel tries to get the cast together to do a music video.

Grow Up (1080p; 1:06): The cast learns how to play older in this dismally unfunny bit from Comedy Central.

Digital Copy: An insert contains a code to redeem a digital copy (in UHD where available) on Movies Anywhere. The code can also be redeemed on Sony Rewards for rewards points and to earn a free digital movie by using the Sony Rewards app on your smartphone.

Jumanji: The Next Level is an enjoyable and entertaining sequel, and a great way to escape this crazy world we are in right now for two hours. 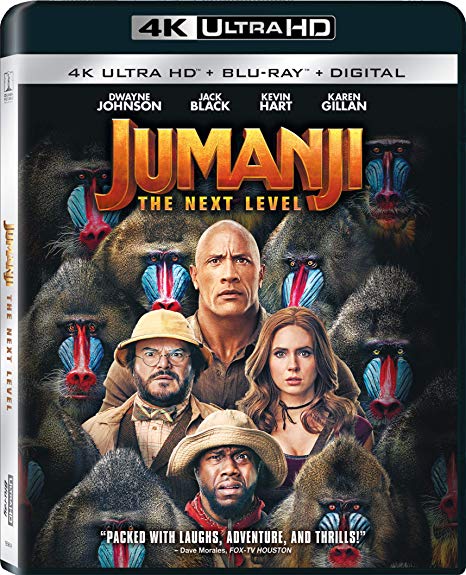