Arthur Fleck (Joaquin Phoenix) lives in Gotham City with his elderly mother Penny (Frances Conroy), having just been released from a mental hospital. He’s taken a job as a street clown as a way to both earn a living and re-enter society, but is attacked by a gang of young hoodlums who take his sign and beat him with it. He’s been meeting regularly with a social worker to discuss his problems and to help monitor his medications, but cutbacks by the city have now taken that benefit away. His aspiration is to be a stand-up comedian and appear on the Murray Franklin Show (Robert DeNiro, in a role reversal from his earlier movie The King of Comedy). But when a series of events occur that include a videotape of his abysmal stand-up act is ridiculed on the late night talk show and the loss of his job as a clown, Arthur begins to sink deeper into despair and narcissism, evolving into the classic DC Comics villain, Joker.

Director Todd Phillips (The Hangover) co-wrote the screenplay with Scott Silver (8 Mile, The Fighter), creating an origin story that at times stays true to the DC Comics legend of the character, but is ultimately more organic (there is no vat of acid that transforms Arthur in this story). Phoenix throws himself 100% into the character, losing over 60 pounds in the process (appearing anorexic in many of the shirtless sequences), and delivering what may be one of his finest performances. De Niro has a relatively small but pivotal role in the film as the late night talk show host (the show is rather obviously patterned after the Johnny Carson-era Tonight Show), and nearly all of the supporting roles are played to perfection as well. Production Designer Mark Friedberg transforms modern day New York City and Newark into an early 1980s era New York as the movie’s Gotham City backdrop, while composer Hildur Guðnadóttir (HBO’s Chernobyl) delivers a haunting score. Joker may not be everyone’s cup of tea, but is possibly one of the best movies from 2019.

Joker was captured at 3.4K, 4.5K, and 5.1K resolutions on Arri Alexa 65, LF and Mini cameras, then completed as a 4K digital intermediate with Dolby Vision high dynamic range for its premium theatrical engagements. Warner’s 2160p HEVC-encoded transfer retains the film’s theatrical aspect ratio of 1.85:1 (don’t let the MPAA tag which is presented in 2.39:1 at the beginning of the disc throw you off) and offers both HDR10 and Dolby Vision high dynamic range. This is a highly detailed presentation, from the pores and textures of the greasepaint in Phoenix’s face to the textures in the fabrics of the costumes. Although intentionally desaturated by director Todd Phillips by design, thanks to the careful use of HDR, colors appear vivid where necessary, appearing natural overall with a wider range of gradients. contrast is excellent, with deep blacks and strong shadow detail.

The default Dolby Atmos track was one that kind of crept up on me, being much more immersive that I had expected for a film of this type. There are so many sublteties in this track overall, from the opening shot which includes locker doors slamming and other clowns applying makeup that travel seamlessly from front to back as the camera dollies in on Arthur, to revealing just how paper thin the walls are in Penny and Arthur’s apartment as thumps and screams emanate from above and all around you. Hildur Guðnadóttir’s score fills the entire listening area, drenching you in the haunting cello instrumentals. LFE is very strong, adding some nice punctuation to gunshots and crashes. Dialogue is clear and understandable throughout.

All of the special features are contained on the included Blu-ray edition of the film.

Becoming Joker (1080p; 1:25): Nothing more than costume and make-up tests of Joaquin Phoenix.

Joker: Vision & Fury (1080p; 22:25): Possibly the only featurette to watch on this disc, which takes a fairly detailed look at the development of the movie, casting Joaquin Phoenix and his acting method, and a more general overall look at the making of the film.

Please Welcome… Joker! (1080p; 2:44): A look at the many different takes of Joker’s entrance on
The Murray Franklin Show. Unfortunately, the majority of the footage and interviews can also be found in Joker: Vision & Fury.

Joker may be too dark and/or disturbing for some, but you pretty much have to expect that for a film that is both a character study and an origin story of one of DC Comics most fabled villains. Presentation is excellent, but the special features, with the exception of Joker: Vision & Fury, are very ho-hum. 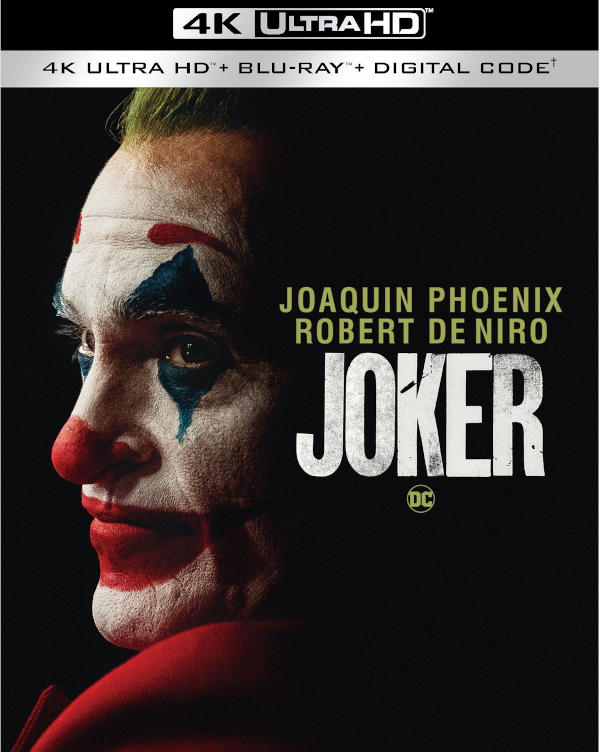