Keanu Reaves returns for more mayhem in John Wick: Chapter 2, picking up where the previous film left off. It’s a fan-pleasing sequel that, as you begin to scratch the surface, has some problems.

John Wick: Chapter 2 picks up mere days after the first film ended, as John (Keanu Reeves) begins chasing a man down in search of his beloved 1969 Mustang that was stolen in Chapter 1. As he arrives at the chop shop where the Mustang is being held, Abram Torosov (Peter Stormare), the brother of Russian mob boss Viggo, recounts the tale of The Bogeyman, aka John Wick, to one of his henchman. Meanwhile, John finds his car and takes out Abram’s crew until the two finally confront one another, declare a truce, and John heads back home, thinking everything is back to normal. That would make this a very short movie, so one night Santino D’Antonio (Ricardo Scamarcio) knocks on the door with one last task for John to complete, essentially erasing the blood marker John made with Santino that allowed John to leave his career as a hit man behind him. When John refuses, Santino torches John’s house, reducing it to rubble and ashes, with only John and his dog escaping within inches of their life. Having nowhere to stay, John heads to the Continental for advice from Winston (Ian McShane). Winston urges John to accept the offer, reminding him that his past will forever haunt him. John’s task is to take out Santino’s sister, Gianna (Claudia Gerini), so that Santino can take her seat on the “High Council.” John travels to Rome to complete the task, but Gianna knows what is about to happen and takes her own life. Gianna’s henchman, including Cassian (Common) and Ares (Ruby Rose – how many movies did she appear in early 2017?), upon hearing of Gianna’s death, go on the hunt for John, with Cassian and John finding themselves in a scuffle on the grounds of Rome’s Continental, in which manager Julius (Franco Nero) reminds them it is forbidden to conduct business on hotel grounds, and convinces them to cool off in the bar in one of the film’s more humorous sequences. But things are just heating up, as Santino, in retaliation for killing his sister, places a bounty on John’s head, barely making it back to New York alive, seeking refuge at The Bowery King’s (Laurence Fishburne) hideout to rest and regroup. The Bowery King helps locate Santino, who is staying at the New York Continental, with no plans to leave. Out of frustration, John makes the fatal mistake of murdering Santino on hotel grounds. Winston has no choice but to declare John excommunicado, placing a death sentence on his head, but allowing John a head start before all the hit men in the world come looking for him.

The sequel is much more violent and bloody than the previous installment, but also has a higher amount of dark humor. Reeves and Common have some great moments together, letting the viewer know that these characters have some respect for each other as well as a love-hate friendship. The stunt set pieces once again are spectacular, often topping the previous film, thanks to former stuntman Chad Stahelski’s direction. Chapter 2 attempts to delve more in to the underground world of John Wick, showing us how a hit man travels from country to country without being stopped at the metal detectors inside the airport and where he gets those nice threads, all thanks to Derek Kolstad’s smart screenplay. Where the movie falters somewhat is in the ending, essentially writing John Wick the character into a corner, a corner that defies all logic for a man to get out of, and may not bode well for Chapter 3.

IMDB.com indicates that John Wick: Chapter 2 was captured at 2.8k resolution with Arri Alexa cameras and completed as a 2k digital intermediate. I saw this film theatrically during its opening week, and the theater ran a “4K Digital Presentation” banner after the trailers and before the film, rather than the standard “Digital Presentation” banner I typically see at this theater. So, I’m scratching my head as to what the true story is. Nonetheless, John Wick: Chapter 2 is absolutely stunning on 4K UHD Blu-ray with its 2160p transfer that has been processed with HDR10. Colors are deeply saturated with more natural gradations. Contrast is improved upon over the 1080p Blu-ray, with deeper blacks that retain more shadow detail. Fine detail is slightly better than the Blu-ray in items such as beard stubble and fabric textures, and the action sequences have less image smearing, likely due to less compression thanks to UHD’s higher bitrate capabilities.

Released theatrically in Dolby Digital 7.1, Lionsgate has upgraded the soundtrack for Chapter 2‘s UHD and Blu-ray release to Dolby Atmos, and this is definitely a reference quality track. The track features a lot of panning surround effects with strong LFE that will quite literally have you spinning your head to where that sound is emanating from. Even during some of the quieter passages, there is a sense of ambiance with atmospheric sounds above and behind you. Dialogue is always strong, clear, and understandable, never getting lost in the mix.

Lionsgate has once again included all of the special features on the UHD disc that are also found on the 1080p Blu-ray.

Audio Commentary with Keanu Reeves and Director Chad Stahelski: Stahelski got his start in the business as Reeve’s stunt double on the Matrix films, and the track is like listening to two old friends talking over a beer. They discuss many key moments of making the film and working with the many different actors and crew.

Training John Wick (1080p; 12:00): A look at how some of the action sequences where choreographed.

Friends, Confidantes: The Keanu/Chad Partnership (1080p; 9:54): The two discuss how their working relationship on The Matrix series evolved into friendship.

A Museum Tour with Sir Jonathan Wick (1080p; 2:11): A tour of the museum intercut with sequences from the film.

Dog Wick Short (1080p; 1:37): A fan-made trailer that supposes that John Wick was killed and his dog took revenge.

John Wick: Chapter 2 is a worthy sequel, one that continues the story without too much repetition from the previous entry. Video and Audio presentation are demo-worthy, and Lionsgate continues their excellent track record of bringing new and catalog titles to the 4K UHD disc format.

Bought the 4k though I don't own a 4k projector or player. Did watch the Blu-ray. Thought the film was not nearly as good as the original, though the ending was absolutely AWESOME. Been replaying it in my mind for the past few days.
Expand signature
Ronald J Epstein
Home Theater Forum co-owner

Ronald Epstein said:
Bought the 4k though I don't own a 4k projector or player. Did watch the Blu-ray. Thought the film was not nearly as good as the original, though the ending was absolutely AWESOME. Been replaying it in my mind for the past few days.
Click to expand...

As a writer, I'm feeling as if they've written themselves into a corner. Yes, it's an exciting ending, but where can they go from here?

Todd Erwin said:
As a writer, I'm feeling as if they've written themselves into a corner. Yes, it's an exciting ending, but where can they go from here?
Click to expand...

Todd Erwin said:
As a writer, I'm feeling as if they've written themselves into a corner. Yes, it's an exciting ending, but where can they go from here?
Click to expand...

Really? I thought the ending opens up countless opportunities. I thought this one was as good if not better than the first.

Can wait to see more of the Wickiverse.
Expand signature
It's gonna be a hell of a ride. I'm ready. .
Reactions: Ashly Yeo and Sean Bryan

Yeah, I don't understand the plot concerns for the next film either.
Expand signature
Crawdaddy's favorite "The Mandalorian" Quotes: "This is the Way" and "I have Spoken"

Today, I had my second viewing of this film on 4K/UHD disc. I enjoyed my film experience even moreso today than I had in my theatrical viewing. This disc looked spectacular on my LD OLED and the Dolby Atmos soundtrack was fantastic.
Expand signature
Crawdaddy's favorite "The Mandalorian" Quotes: "This is the Way" and "I have Spoken"

I watched this last night and came away none too impressed. Thought the first was much better. Maybe a second viewing will change my perspective.
Expand signature
Careful man, there's a beverage here!

DavidMiller said:
That is my concern... Eagerly awaiting how they are going to get themselves out of this one.
Click to expand...

Well he already said what was going to happen. Whoever comes, he'll kill them. He'll kill them all.
Expand signature
-Jeff Cooper 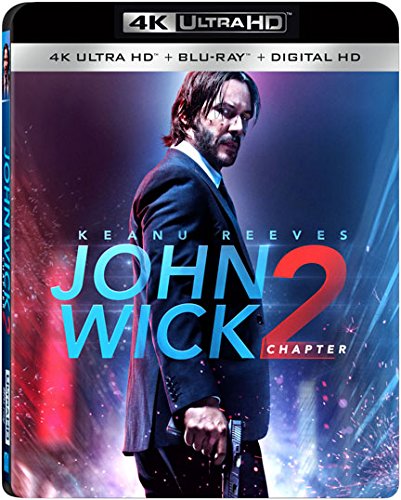