Things return to familiar turf for star Matt Damon and his Jason Bourne director of choice Paul Greengrass after almost a decade away from the franchise, and audiences expecting the usual formula aren’t likely to be disappointed.

Just as Michael Corleone wailed that he was jerked back into the Mafia when he thought he was safely out, so, too, does poor Jason Bourne get sucked back into the malicious world of CIA covert operations in Paul Greengrass’ Jason Bourne. Things return to familiar turf for star Matt Damon and his Bourne director of choice after almost a decade away from the franchise, and audiences expecting the usual formula aren’t likely to be disappointed. For those who expect some added zing, however, Jason Bourne doesn’t really offer up anything that we haven’t already seen before, just bigger and more elaborate variations of everything that’s come to be familiar about the series.

Former CIA operative Nicky Parsons (Julia Stiles) has joined a renegade group of whistleblowers out to expose the nefarious operations of CIA director Robert Dewey (Tommy Lee Jones). When alert and eager young computer analyst Heather Lee (Alicia Vikander) catches Nicky in the act of hacking CIA undercover operations, Nicky flees from her Icelandic headquarters and makes her way to Athens where Jason Bourne (Matt Damon) is living off the grid making a living in underground bare-knuckle boxing bouts. The CIA wrongly assumes Nicky and Bourne are working together and send a lethal hitman (Vincent Cassel) to rid the agency of their intrusion, but once Bourne becomes aware that his whereabouts are known, he has no choice but to jump back into the game and find out what other secrets about his past Nicky has hinted are hidden in files she’s given him on a flash drive.

The screenplay by director Paul Greengrass and Christopher Rouse may inject into the story some tenuous ties of the CIA’s involvement to overriding social media network surveillance on all Americans, but the crux of the movie is still the usual spellbinding cat and mouse pursuit between a corrupt CIA director who’ll stop at nothing (including the murders of dozens of CIA operatives setting up Bourne as the killer) to wipe Jason Bourne off the face of the earth while a more level-headed underling attempts to work with Bourne to get to the truth he’s seeking (in this film, information on his father’s involvement in his original black ops directive Treadstone). Though the world is far more digitally prescient now than it was when Jason made his last appearance in The Bourne Ultimatum in 2007, he still manages to often be a step or two ahead of his pursuers and still able to take out armed gunmen with a table leg or a some other handy nearby object. As in the previous films, we get fights (including a brutal climactic confrontation between Bourne and the man who murdered his father), foot chases through crowded streets and byways (in Athens, there’s a violent demonstration going on between civilians and police which Bourne weaves in and out of), globe hopping from Athens to Berlin to London to Las Vegas, and, as expected, the car chase to end all car chases through the Las Vegas strip, all handled impeccably by director Paul Greengrass and his second unit director Simon Crane.

Matt Damon has long since found the depths of the troubled, haunted Jason Bourne, so the only new colors we see now are merely his sometimes slow readjustments to a world where hackers are the new hitmen, who can trace him almost instantly and use facial recognition software and surveillance cameras to catch even his most elusive maneuvers. He’s thickened up in the decade he’s been away from the character with more musculature to counterbalance a slight lack of the quickness of his youth, but he hasn’t lost the audience’s rooting interest in the character whose only goal has always been to understand who he is and what happened to make him that way. Tommy Lee Jones falls into the same stereotyped mold as his unbridled CIA predecessors Chris Cooper and David Strathairn, a rather one-dimensional villain ruthless to the core. Alicia Vikander takes a rather deadpan approach to her role as Heather Lee, a young, ambitious operative with her own agenda. It’s nice to see Julia Styles again as Nicky Parsons trying to do the right thing against overwhelming odds. Vincent Cassel marks his territory as Bourne’s most able physical adversary in the series. Riz Ahmed as a billionaire software guru (inventor of a social media network called Deep Dream) and Ato Essandoh as Dewey’s CIA bodyguard get decent amounts of face time to establish their characters.

The film’s original theatrical aspect ratio of 2.40:1 is faithfully rendered in this 1080p transfer using the AVC codec. Yes, the jittery camerawork from the previous two Paul Greengrass-helmed adventures is still very much present, but that doesn’t negate the sharpness and clarity of the images when the camera isn’t constantly moving and the editor isn’t constantly cutting. Color veers to the brown side due to much nighttime activity (particularly the Athens scenes), but daytime scenes are bright and colorful with hues under complete control. Skin tones are natural and appealing. Black levels are excellent, and contrast has been well maintained for a consistent look to the movie. The film has been divided into 20 chapters.

The DTS:X sound mix (decoded by my equipment as DTS-HD Master Audio 7.1) never makes a wrong move in providing just the kind of action-packed slam-bang soundtrack one would expect from the series. Clever use of directionalized dialogue in scenes set in the CIA operations room allows us to hear multiple conversations and comments in various speakers in the array while the main dialogue is, of course, programmed into the center channel. The incessant Bourne-typical background score by John Powell and David Buckley keeps pulses racing throughout, and other atmospheric effects get masterful spread in pans across and through the soundstage when needed.

Bourne to Fight (18:13, HD): a three-part look at the memorable fight scenes in the movie including the opening bare-knuckle boxing scenes, the apartment fight between Bourne and whistleblower Christian Dassult (Vinzenz Kiefer), and the climactic struggle between Bourne and his hitman adversary. Along the way comments are made by director Paul Greengrass, fight coordinator Roger Yuan, stunt coordinator Gary Powell, and actors Matt Damon, Vinzenz Kiefer, and Vincent Cassel.

Las Vegas Showdown (14:56, HD): a two-part look into the use of the Aria Hotel for the convention chaos of the first part of the Vegas sequence followed by the elaborate stunt work needed for the car chase down the strip. Director Paul Greengrass, second unit director Simon Crane, producers Frank Marshall and Gregory Goodman, writer/editor Christopher Rouse, and stars Matt Damon, Alicia Vikander, Vincent Cassel, Riz Ahmed, and Ato Essandoh all comment on the complexity and brilliant execution of the work there.

Jason Bourne offers just what one expects from a film in the franchise: chases, fights, and cat and mouse dodges with enough twists and turns to hold one’s interest. There’s really nothing new here, however, for those hoping for freshness or variety in the storytelling, but there won’t be any complaints with the home video presentation: reference quality all around. 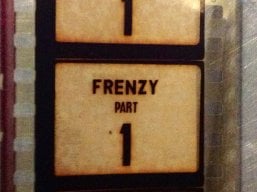 The mistake with JASON BOURNE is that if feels like the third film in a trilogy. The style, a whole series of climaxes. They really should've done an IDENTITY paced film, pulling you back into Bourne's world years later. Instead we get a sort of inferior ULTIMATUM in which Alica Vikander is mis-cast, along with a Vegas demolition derby climax that is so not Bourne. Quite a disappointment.

It just felt like it was a remake of the first 3 films. It didn't wade into any new territory. 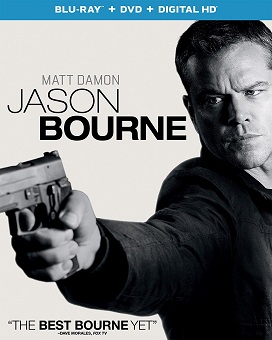