A by-the-numbers action picture trading on the name of its classier parent film to generate a string of mediocre sequels, William Kaufman’s Jarhead 3: The Siege is as good as it needs to be in order to be sold to international theaters in selected venues and go to home video for the rest of the world.

A by-the-numbers action picture trading on the name of its classier parent film to generate a string of mediocre sequels, William Kaufman’s Jarhead 3: The Siege is as good as it needs to be in order to be sold to international theaters in selected venues and go to home video for the rest of the world. One doesn’t expect much in the way of plotting or characterization in a film like this, but there is an abnormally high body count and millions of rounds of ammunition expended before the film finishes its noisy 90-minutes.

Excelling as a first-rate Marine in all of his training and course work, Corporal Evan Albright (Charlie Weber) is assigned to duty at the U.S. Embassy in an unnamed Middle Eastern country. Albright is completely dedicated to service and is always on the alert, noticing a suspicious loiterer around the Embassy and bringing it to the attention of the U.S. Ambassador (Stephen Hogan) instead of going through his gunnery sergeant (Scott Adkins) and the other proper channels. It turns out Albright’s ignored suspicions were on the mark since the man turns out to be long-presumed dead terrorist Khaled (Hadrian Howard) who has mounted a concentrated attack on the Embassy, an attack that catches the guard by surprise and leads to a takeover situation with the outmanned cadre of Marines trying to hold off a near-battalion of the enemy. Major Lincoln (Dennis Haysbert) and his rescue troops are an hour away, so the pinned down Marines must do what they can to secure protected documents and defend the Ambassador as best they can.

The Chad Law-Michael D. Weiss screenplay is short on narrative, characterizations, and surprises (unless there is the unexpected lack of a hook up between the film’s leading man and its major female character) and instead serves up many of the usual clichés of this genre: green recruit with valuable intel ignored by higher ups resentful of his overconfidence, foxy secretary who proves to have more moxie than many of the skilled soldiers who surround her, comic relief in the form of a videographer. Usually more creative action movies of this type might have set about installing some surprises for the enemy with some booby traps or out-of-nowhere attacks against the foe (there is one at the climax), but in Jarhead 3, the body count and the amount of expended bullets seem to be the primary focus of the enterprise (the attacks aren’t actually well organized or coordinated: it’s mostly just shoot until everyone’s dead). The videographer character (Dante Basco) might have been intended to provide early exposition for the characters as he charts their daily routines as we see the men working, exercising, and relaxing and then provide comic relief when things begin to heat up, but instead the trope is more irritating than amusing, the efforts to give us a different visual motif when we switch to what he’s seeing through his video camera ludicrous when people are fighting for their lives and soldiers on both sides are dropping like flies.

It’ll be a revelation to fans of How to Get Away With Murder to see star Charlie Weber (the lascivious bearded Frank on the show) clean shaven and bulked up and looking about ten years younger playing the very definition of a gung-ho Marine as Evan Albright. He’s completely convincing as a no-nonsense leatherneck as is Scott Adkins as gunnery sergeant Raines, tough and firm and hiding his native British accent wonderfully well. Sasha Jackson and Stephen Hogan as secretary Olivia Winston and Ambassador Dan Cahill respectively likewise hide thick brogues and do fine work in their undemanding parts. Tom Ainsley and Erik Valdez as friendly fellow Marines and Joe Corrigall who plays the resentful soldier chafing at the new golden boy of the team add a little color to the pool of sacrificial lambs. Perhaps the movie’s most famous name Dennis Haysbert has little to do but sit and look worried as they speed to aid their brothers-in-arms. Hadrian Howard makes an acceptable if one dimensional villain while Charlie de Melo as his brother trying to establish peace in the land has only a few lines but does much with expressive body language and facial expressions. Vlado Mihailov is one of the friendly native casualties that this type of movie always establishes to better characterize the ruthlessness of the insurgents.

The movie has been framed at 2.35:1 and is presented in 1080p resolution using the AVC codec. Sharpness is usually very good though there are a few shots that seem a little softer than necessary, and black levels are good but not exceptional. Color is solid and expressive with the blood reds registering especially keenly (there are a lot of head shots in this movie). Contrast has been expertly applied. The movie has been divided into 20 chapters.

The DTS-HD Master Audio 5.1 sound mix does not make maximum use of its surround channels for all of the rapid-fire weapons that are in constant use once the siege begins. Instead, most of those atmospheric effects are relegated to the front soundstage while the fronts and rears hold the driving music and the initial mix of hard rock and rap songs. The dialogue has been well recorded and can be found in the center channel.

Theatrical Cut/Unrated Cut: the viewer is offered a choice of two versions of the movie at start-up, the theatrical R-rated version running about one minute longer than the unrated cut.

It’s action-by-the-numbers filmmaking with William Kaufman’s Jarhead 3: The Siege. If these mindless action shoot-‘em-ups are your thing, this one is about par for the course, but the talent on board here deserves something a lot more demanding and worthy of their gifts. 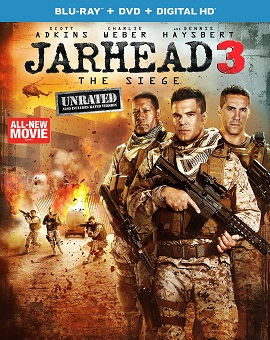