Forum List What's new Dark Style Change width
Log in Register
What's new Search
Menu
Log in
Register
Navigation
Install the app
More options
Dark Style
Close Menu
Posted on February 5, 2016 by Todd Erwin
You are using an out of date browser. It may not display this or other websites correctly.
You should upgrade or use an alternative browser.
Fun forgotten thriller from the 1980s. 3.5 Stars

Jack’s Back, James Spader’s first starring role, finally makes its way to Blu-ray in a newly-minted transfer from the original negative courtesy of Scream Factory (a Shout! Factory label). Rowdy Herrington’s directorial debut is a fun little thriller with solid performances from its mostly then-unknown cast.

The centennial of Jack the Ripper’s exploits has apparently inspired a copycat in 1988 Los Angeles, following the serial killer’s murders to a tee and leaving the police stumped. John Wesford (James Spader), a young intern working at a free clinic finds the would-be Ripper’s next victim while making a routine welfare check on one of the clinic’s patients. It is during this welfare check that he also runs into Jack (Rex Ryon), a co-worker that John suspects is the serial killer. When John confronts Jack back at the clinic after hours, Jack kills him, making it appear as a suicide. When John’s twin brother Rick (also played by Spader) learns of his death, he begins to investigate with help from John’s cute co-worker Chris Moscari (Cynthia Gibb). The police soon suspect John as the serial killer, but profiler and psychologist Dr. Carlos Battera (Robert Picardo) thinks otherwise, and hypnotizes Rick to tap into the twin’s psychic link, hoping to learn who the true killer is. To tell anymore would spoil some of the fun of the twists and turns of director Rowdy Herrington’s screenplay, leading up to a surprise ending (and one most would not expect).

Jack’s Back is not a great film, but what makes it noteworthy is the director’s commitment and homage to the thriller genre and its very talented cast of then mostly unknowns. First and foremost is James Spader, who prior to this film played supporting roles in Pretty In Pink, Mannequin, Less Than Zero, and Wall Street. Here he has the opportunity to play essentially two versions of the same character, and manages to pull it off in spades (Siskel and Ebert praised his performance in the film, prompting a “Two Thumbs Up” rating). Cynthia Gibb is charming as the would-be love interest for the twins. Robert Picardo is his usual smarmy best as the psychologist who still lives at home with his mother. And keep an eye open for Jim Haynie, John Wesley, and Chris Mulkey as the detectives investigating the murders.

The back cover of Shout! Factory’s Blu-ray/DVD combo release states that this features a new high-definition transfer from the original negative. While it is obvious that some cleanup work was completed during the transfer (such as the removal of dirt and scratches), the final image on display here isn’t going to win any awards. But that likely has more to do with the source material, as Jack’s Back is very obviously a low-budget film, shot with minimal lighting on relatively grainy film stock. The good news is that there is no evidence of any artificial sharpening or smoothing, resulting in a very natural and film-like appearance. This is probably as good as it ever has, or ever will, look.

The DTS-HD Master Audio 2.0 mono track serves its purpose, and nothing more. Dialogue is clear and understandable, never getting lost in the music or sound effects. Fidelity and dynamic range are adequate, never sounding distorted.

Audio Commentary with Director Rowdy Herrington: A fairly interesting track, Herrington discusses the genesis of the movie, his career prior to making the film, working with James Spader, and why that title song sounds suspiciously like Peter Gabriel’s Red Rain.

DVD Copy: The movie in 480p and Dolby Digital 2.0 mono, with all of the same special features as on the Blu-ray.

Jack’s Back is something of a forgotten gem from the 1980s, launching the careers of Rowdy Herrington (Roadhouse) and James Spader. The movie looks and sounds better than it has in years, and Scream Factory has provided some nice special features to round out the package. 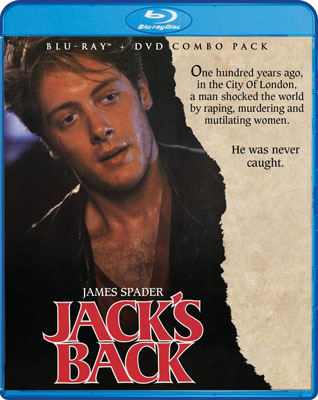