Posted on July 2, 2018 by Neil Middlemiss
One of the best action thrillers of the past 10 years 4 Stars

Based on Lee Child’s exciting character and adapted from the novel One Shot, Jack Reacher is a gripping old-school thriller anchored by a terrific performance from Tom Cruise, a foundation of brilliant filmmaking, and a hard-boiled, gritty feel that the big screen had been sorely missing. Paramount’s UHD is a nice upgrade over the already excellent Blu-ray release.

The prime suspect in the sniper deaths of five men and women along a public waterfront utters just two words in response to the district attorney’s offer for him to avoid the death penalty – “Jack Reacher.” That name belongs to mysterious man, a former military investigator and loner-personality filled with conversational brevity and a penchant for inviting perplexed looks at his ‘few words’ style. Hired by the attorney assigned to represent the accused, Reacher begins an investigation when the facts of the story don’t quite add up. Turn after turn leads to a deeper secret hiding at the center of the case the city believes is open and shut.

Tom Cruise may not have seemed the likely candidate to embody Lee Child’s popular literary character on the big screen. At 5′ 7″, Cruise is a fair way from the hulking 6′ 5″ figure that Child describes, but Cruise carries himself as if he were that tall with a stern, determined performance that insists a brutality more hinted than demonstrated, and serves the story and film expertly. It’s one of Cruise’s best performances, in one of what I believe is his very best films.

Cruise is supported by Rosamund Pike as Helen, the skilled attorney with classic beauty and a hard nose for judicial fair play. Her father is the District Attorney Rodin (Richard Jenkins) pushing for a confession in exchange for talking the death penalty off the table, a maneuver his daughter is uncomfortable with as she sees it as little more than strong-arm tactics to close cases quickly. The wonderfully talented Richard Jenkins portrays Rodin alongside David Oyelowo playing his lead prosecutor, Emerson, a man with little patience for Jack Reacher. Werner Herzog (Rescue Dawn) turns in an unsettling performance as the mysterious Zec, pushing pawns around to serve his means, chief among them Charlie, his muscle played by Jai Courtney (A Good Day to Die Hard). Finally, Robert Duvall makes a relatively brief but important appearance as Cash, a shooting range owner, reuniting with Cruise for the first time since 1990’s Days of Thunder.

Christopher McQuarrie’s direction is taut. With great purpose and purity, McQuarrie captures the essence of the Reacher character, manages remain authentic and without betraying him for the sake of expediency or a softer ending. Cruise–and the entire cast-excel under McQuarrie’s confident hand. The director marvels in a, dare I say, a decidedly 1970s inspired filmmaking technique, allowing the spectacle and action of Jack Reacher to come not from sequences augmented by computer generated imagery, but from muscle and performances by leads that bristle with thrills. In fact, Jack Reacher exalts an absence of visual effects work (at least, any noticeable VFX) for its sequences. Chief among these is the car chase involving Reacher’s pursuit in a stolen 1970 Chevrolet Chevelle SS of the suspects driving a slick Audi A6. It pits the muscular old school methods of Reacher against the brutal but modern ‘bad-guys’; a juxtaposition exemplar for the film’s core. McQuarrie, who won the Academy Award for his superb The Usual Suspects screenplay adapts author Lee Child’s One Shot more straight and narrow than his previous works may lead you to believe, but the no-nonsense feel of the Reacher character, at least for his cinematic introduction, require that very approach. He teamed with Cruise again following this film for the highly regarded Mission: Impossible – Rogue Nation, and they pair once again for this year’s highly anticipated Mission: Impossible: Fallout.

Jack Reacher is superbly entertainment. Gripping from the jump, and what it may lack in plot surprise, it makes up for in masterful and bravura execution. Watching Cruise as a more mature actor is a treat here. Contrasted with the more cocky and slick roles he excelled at in films like A Few Good Men and the aforementioned Days of Thunder, his much darker, surgically brutal Jack Reacher is fascinating. Gritty and highly competent, Reacher’s expertise and fast-skills are matter of fact and even reluctant, versus the eager hero of roles he excelled at earlier in his career. This is a Tom Cruise that I really enjoy seeing.

The Blu-ray release of Jack Reacher featured a terrific presentation and this UHD puts just a slight edge on that glorious image. Filmed on 35mm, this presentation has exceptional detail, a retention of film grain, and, thanks to the Dolby Vision and HDR10, an even better display of superbly rich and perfectly saturated colors. Black levels are uniformly excellent with strong shadow details.

Night sequences in particular shine on this UHD, and the car chase, one of the film’s best sequences, delights with brilliant contrast and the deepest blacks possible. Skin pores, fabrics and even the interior of the classic car, show off highly resolved detail a tad finer than the already excellent Blu-ray.

Paramount didn’t stock Jack Reacher with a Dolby Atmos track, but the 7.1 DTS-HD Master Audio, the same track that accompanied the Blu-ray, is impressive anyway.

A pristine, precise, bold and throaty 7.1 DTS-HD Master Audio delivers nicely. High caliber gunshots punch the subwoofer and echo through the surrounds, fistfights are natural sounding rather than the product of overdone sound effects, and the car chase sequence as riddled with a barrage of sounds throughout the speakers in an all-enveloping cacophony of sound. It’s brilliantly put together and effective.

The audio commentaries are standout as special features. Besides the positive commentary by director and star, the commentary track by McQuarrie’s composing partner (having worked with him on Way of the Gun and Mission: Impossible – Rogue Nation 4) is a treat for fans of film scores. The remaining special features clock in just shy of an hour and cover the interesting origins of the film (adapting One Shot), adopting realistic fighting styles, and the author discussing the ‘Reacher phenomenon.

The UHD contains the two commentary tracks, while all the special features are available on the included Blu-ray disc.

Despite a modest box-office haul, Paramount eventually greenlit a sequel in what became the disappointing Jack Reacher: Never Go Back. With the lower gross for the sequel, it’s likely we’ve seen the last of Cruise as Reacher. That’s a real shame as the Jack Reacher character is ripe for the cinema. With unflinching skills, commanding presence, a mysterious background, an honorable code as guide, and a long list Lee Child novels to draw from, this has recurring series written all over it. And if a sequel could ever happen, I would hope that it hews closer to this first Jack Reacher, because it’s so very good. Highly Recommended! 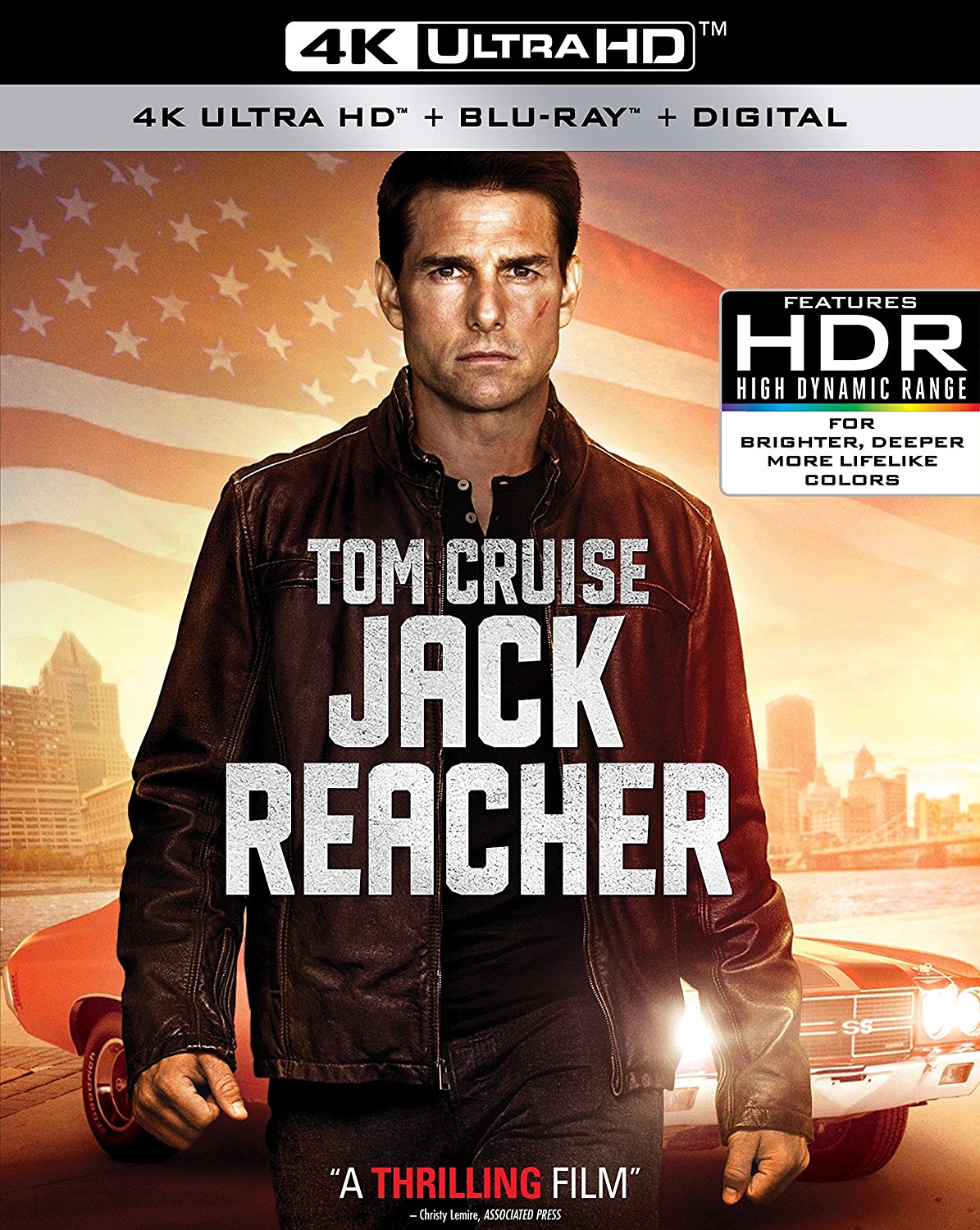