Forum List What's new Dark Style Change width
Log in Register
What's new Search
Menu
Log in
Register
Navigation
Install the app
More options
Dark Style
Close Menu
Posted on January 5, 2021 by Josh Steinberg
You are using an out of date browser. It may not display this or other websites correctly.
You should upgrade or use an alternative browser.
The delightful holiday classic makes its Blu-ray debut. 5 Stars

Utterly charming and sweet, It Happened On Fifth Avenue is a wonderful Christmas-themed comedy with a perfectly Hollywood portrayal of winter in New York City.

Roy Del Ruth’s 1947 production of It Happened On Fifth Avenue was the first release by Allied Artists, a newly formed prestige devision of Poverty Row studio Monogram Pictures. With a story that had earlier been earmarked for no less than Frank Capra, the film shares a certain populist warmth with Capra’s best works, but has its own distinct feel.  Offering a vision of New York City that is more fantasy than documentary, it works perfectly for that special time of year when hope seems stronger than cynicism.  Imitated but never equaled by a thousand Hallmark movies, It Happened On Fifth Avenue is the real deal.

Aloysius McKeever (Victor Moore, sheer perfection) is a hobo with a brilliant hustle: every winter, when the world’s second richest man vacates his New York City mansion for the warmth of Virginia, McKeever gently lets himself in to the otherwise empty home and lives comfortably (but respectably) until just before the owner returns.  On the other side of town, Jim Bullock (Don DeFore) is an ex-GI who finds himself homeless when his apartment building is scheduled for demolition.  After a chance meeting in the park, McKeever invites Bullock to move in with him, and eventually reveals that he is not in fact the owner of the home.  Soon, with McKeever’s blessing, Bullock invites his war buddies to stay with them, saving them from certain homelessness.  But their cozy world is turned upside down when Trudy (Gale Storm) breaks in to raid one of the wardrobes in advance of a job interview.  What the audience knows that McKeever and Bullock don’t is that Trudy is actually the daughter of Michael O’Connor (Charles Riggles), aka the world’s second richest man and owner of the titular Fifth Avenue mansion.  Believing Trudy to be homeless, she is invited to stay in the house, and soon she and Bullock develop feelings for each other.  Trudy is reluctant to admit the truth, worrying that Bullock will see her differently if he knows her background.  When O’Connor makes a surprise appearance, Trudy convinces him to put up a facade of being another homeless soul.  Initially a grouch and a grinch, O’Connor begins to have second thoughts about his black and white world outlook when Trudy convinces her mother Mary (Ann Harding) to join them at the mansion, beginning a reconciliation process between the long estranged O’Connors.

Much of what occurs during It Happened On Fifth Avenue will predictable to the modern cynic raised on a diet of saccharine made-for-television holiday films that pile gimmick upon gimmick.  What makes It Happened On Fifth Avenue stand above and apart from that crowd is the utter sincerity of the characters and the actors portraying them. The film’s plot could have been wrapped up in less than its nearly two hour running time, but rather than filling that length with phony suspense, the filmmakers give us a gift: time with people you’d want to be friends with.  Victor Moore’s performance hits exactly the right notes as a man who has accepted his less-than-fortunate place in life but never surrenders his spirit to it.  Don DeFore shows exactly why he was cast in The Adventures of Ozzie & Harriet as Ozzie’s neighbor a few years later; it’s impossible to watch DeFore in this role and not want to be his friend.  As the love interest, Gale Storm brings the perfect blend of sweetness and headstrong determination.  Charles Ruggles and Ann Harding make a wonderful pairing as two people who have fallen out of love but find themselves with the chance to get it back.  As DeFore’s friends, Alan Hale, Jr. and Edward Ryan exude decency and warmth.

In the more than seventy years that have passed since the film’s original release, many of the ideas that It Happened On Fifth Avenue uses as story background remain as relevant as ever.  The struggles Bullock faces in finding and keeping an affordable home in a major city like New York are just as real now as they were then.  There’s arguably an even greater problem today with O’Connor-like figures buying up real estate locations as status symbols, keeping them mostly vacant as others struggle to find places to live.  That’s not to say that the film has any great political ambitions or is trying to make an overt statement; rather, it’s a film that asks its characters to consider their obligations to each other, and in doing so, invites its audience to do the same.

It Happened On Fifth Avenue is presented in its original theatrical aspect ratio of 1.37:1 in its Blu-ray debut from Warner Archive.  Remastered from a 4K scan of the “best surviving nitrate elements,” the transfer here presents the film in pristine condition.  Though the film creates the appearance of New York City with a mix of process shots and opticals, everything is blended together with a near seamless quality.  The range of greyscale is nothing short of silvery perfection, with fine detail in abundance.  Perfectly steady with no signs of age-related wear or damage, and retaining a gorgeous film-like quality, this release is easily the best the film has ever looked on any home media format.

The film’s monaural audio is presented via the lossless DTS-HD MA format.  The dialogue is well-recorded and easy to understand, and the track overall is remarkably clear and free of distraction, particularly considering its age.  On rare occasions, there is the slightest hint of hiss, which is preferable to an overly filtered track.  And while the film’s music score comes across particularly well, some of the original songs seem ever so slightly thinner by comparison.  But these are minor nitpicks on a soundtrack presentation that is the best the film has ever sounded.

It Happened On Fifth Avenue remains the quintessential fantasy of the holiday season in New York City.  Victor Moore plays his part to perfection, as do the rest of the talented and charming cast, including Don DeFore, Charles Ruggles, Gale Storm and Ann Harding.  Warner Archive’s Blu-ray release is a noticeable and welcome improvement over the previous DVD edition, making this an easy upgrade recommendation for both longtime fans and newcomers.

Thanks for the review Josh. The blu ray of this utterly charming film wouldn't have arrived in time for Christmas so i watched the DVD. Looking forward to getting this in the next few weeks, glad it's a good one.

Thanks, Josh! Great review of a wonderful film! I actually postponed by annual Christmas viewing of this one so I could watch it when the blu-ray was released. It looks great on this disc!

I'll watch anything with the great Ann Harding!
Time to rediscover her, guys!

BobO'Link said:
I'm still waiting for my copy to arrive. The USPS picked it up January 1st in Los Angeles and took *two weeks* to get it to Philadelphia, PA, where it currently sits, overshooting the Memphis distribution center that serves my town by ~1000 miles! Basically it's gone completely cross country for a Mid-South address! I figure it'll take them another week or two to get it back to Memphis.
Click to expand...

I had one a while back that made it to New Jersey, but then was delivered to the Post Office in the next town south of me. They apparently couldn't figure out what to do with it, so they sent it back to New Jersey, where it was held for a few more days before they finally sent it to my Post Office. I checked the label when it arrived and it had my correct address and Zip Code. More recently I received a Christmas care that took two weeks to get here from Nevada.
You must log in or register to reply here. 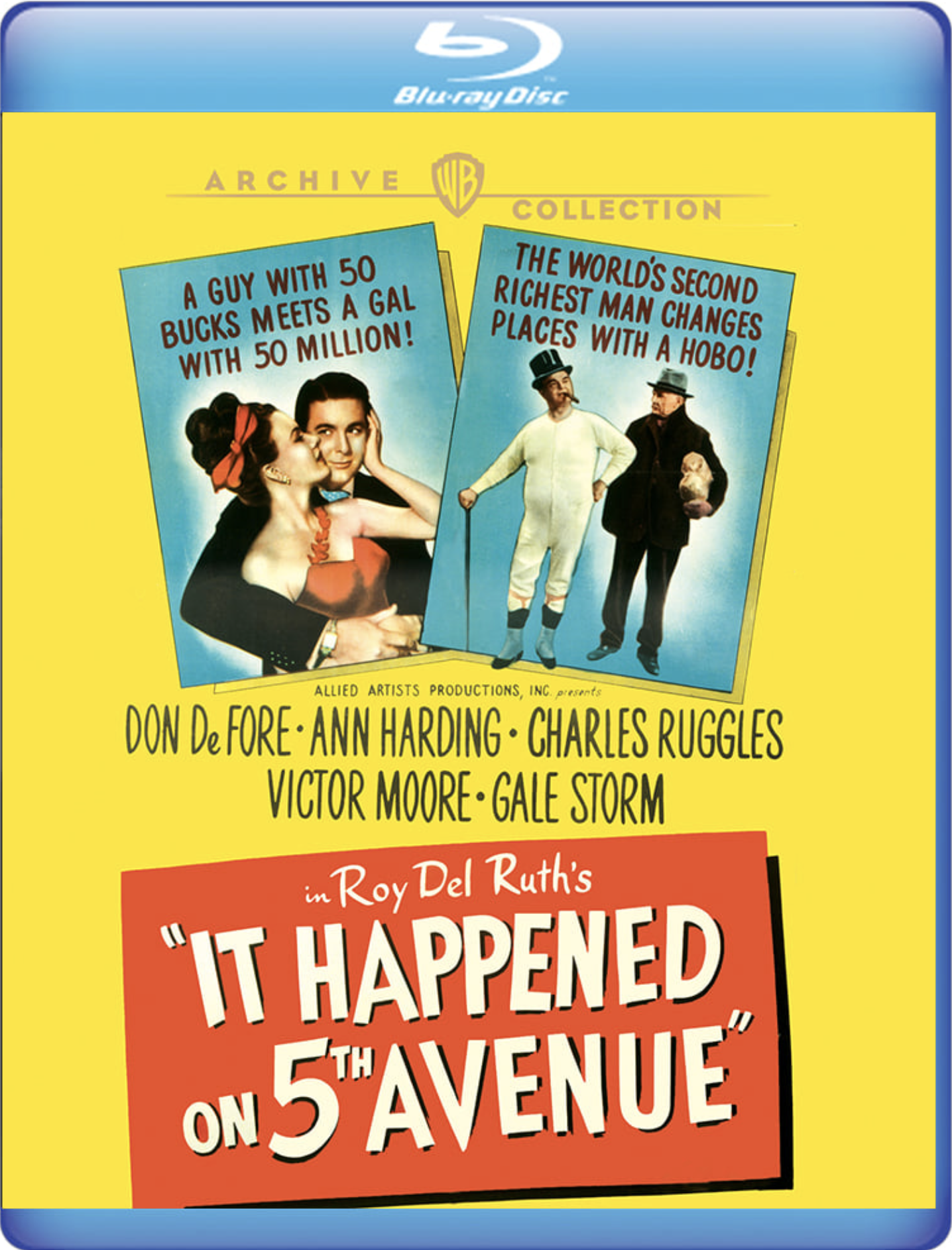