The second half of the big screen adaptation of Steven King’s creepy clown story, IT: Chapter Two, is at times frightening chillingly fun, but ultimately drags on for nearly three hours.

At the conclusion of 2017’s first chapter, the adolescent Losers, having seemingly defeated the evil clown Pennywise (Bill Skarsgård), made a pact to return to their hometown of Derry, Maine if the evil ever returns. After a vicious hate crime is committed at the carnival on a homosexual couple by a gang of kids in Derry 27 years later, Mike Hanlon (Isaiah Mustafa) begins to call each member of The Losers back home. Bill (James McAvoy) has become a successful horror novelist, Richie (Bill Hader) a standup comedian, Eddie (James Ransome) is a risk assessor for an insurance company, Stanley (Andy Bean) is an accountant, Ben (Jay Ryan) is an architect, and Bev (Jessica Chastain) is a fashion designer caught in an abusive marriage. The group reunites at a Chinese restaurant in Derry, all except Stanley, who committed suicide, and begin to experience hallucinations perpetrated by Pennywise. Can this group of even more damaged adults come together to once and for all defeat the underlying evil that manifests itself as Pennywise?

Returning director Andy Muschietti and screenwriter Gary Dauberman spend a lot of time refamiliarizing the audience with the Losers, using flashbacks with the cast of the first film and the interactions of the adult cast, who start out very dysfunctional as a group, despite Mike’s attempts to help each one find what their individual “artifact” is that will help destroy Pennywise. Unfortunately, this causes the film to lose its momentum from the opening scene at the carnival, adding to the nearly three hour running time and seeming to take forever to regain that momentum as we head into the second act. Nothing is ever quite what it seems through much of the film, which adds to its creepiness. Bev’s return to her old home, visiting with the new tenant, is perhaps the most frightening as we slowly get to know this new tenant, while Bill’s visit to an antique shop to retrieve his old bike is probably the funniest as it contains a cameo by the source material’s author, Steven King. The performances are good all around, which does help to keep the audience interested as we slowly move towards the eventual confrontation.

IT: Chapter Two was captured at 2.8K and 3.4K resolutions on Arri Alexa XT, SXT, and Mini cameras, then completed as a 2K digital intermediate in the 2.39:1 aspect ratio, with Dolby Vision high dynamic range for its premium engagements. Warner’s 2160p upscale retains the theatrical aspect ratio, adding not only Dolby Vision and HDR10 but also HDR10+ high dynamic range. Viewing the disc on HDR10-capable equipment, this is a slightly better experience than I had with the UHD Blu-ray release of IT, although I have seen better 2160p upscales on the format. Colors are slightly more natural and vivid than on the included Blu-ray, offering a wider gradation of colors. Contrast and black levels in particular get a nice boost, allowing for inkier blacks and better defined shadow detail. Fine detail gets a minimal boost that is noticeable if you are paying more attention to the picture overall, but is more noticeable in some of the more darker sequences.

The default audio track on IT: Chapter Two is a frequently frightening Dolby Atmos mix that places the viewer in full immersion of the terrors in Derry, Maine. This is a wide and spacious mix, utilizing every speaker in your system to its full potential. Sounds are thrown at you from nearly every possible direction, with heavy LFE utilization as well. Even more impressive, dialogue remains clear and understandable throughout. A redundant Dolby Digital 5.1 track has also been included, encoded at the DVD standard 448 kbps.

The UHD Blu-ray release of IT: Chapter Two is a 3-disc set, with movie-only discs on both UHD and Blu-ray, plus a Blu-ray disc devoted entirely to Special Features.

Movie Disc (UHD/Blu-ray)
Audio Commentary with Director Andy Muschietti: Muschietti is fairly laid back in this track, but still offers a ton of interesting tidbits on the making of the film. This track is available on both the UHD and Blu-ray versions of the film.

Special Features Disc (Blu-ray)
The Summers of IT – Chapter One: You’ll Float Too (1080p; 35:38): This first part looks at the casting and making of the first film primarily.

The Summers of IT – Chapter Two: IT Ends (1080p; 39.30): A look at the casting process for the second film, in which many of the child actors had a hand in casting their adult counterparts, plus a look at the making of IT: Chapter Two.

As good and entertaining as IT: Chapter Two is, it does come close to overstaying its welcome due to a slow reintroduction of its characters and initial setup of this installment. Presentation is very good, and the extras are interesting although somewhat lightweight. 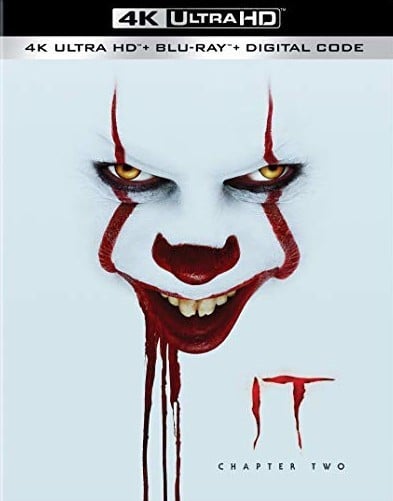