Forum List What's new Dark Style Change width
Log in Register
What's new Search
Menu
Log in
Register
Navigation
Install the app
More options
Dark Style
Close Menu
Posted on March 18, 2021 by Matt Hough
You are using an out of date browser. It may not display this or other websites correctly.
You should upgrade or use an alternative browser.
Unsatisfyingly campy screen biography of Jacqueline Susann 2.5 Stars

Andrew Bergman’s Isn’t She Great seems to be attempting to be the first camp movie biography. Loaded with catty rejoinders, excessively vulgar clothes, and a leading lady playing a caricature of a human being, Isn’t She Great wastes an interesting life story on a lot of cheap jokes while a cast of well-known, talented actors goes down in flames.

Occasional actress and would-be celebrity Jacqueline Susann (Bette Midler) thinks of nothing in life but being famous, but she can never seem to catch the big break that would usher in a big time entrance into the upper echelons of show biz. Agent Irving Mansfield (Nathan Lane), however, never doubts Jackie’s ability to do anything she puts her mind to, but after a series of professional and personal setbacks, Irving hits on the idea of Jackie writing a salacious book, something to rival best sellers of the time by Harold Robbins. Writing about the only thing she knows, show business, Jackie churns out Valley of the Dolls which is rejected by every major publisher in New York but finally catches the attention of an editor (Amanda Peet) at Henry Marcus Publishers. Marcus (John Cleese) attaches a pompous male editor Michael Hastings (David Hyde Pierce) to Jackie to smooth out the book’s rough edges, but a weekend with his Connecticut relatives proves to him that the book will likely be popular with all ages and classes of people. With Jackie and Irving’s insatiable propensity for publicity, they launch themselves on a nationwide tour to tout her upcoming book.

Though there are chunks of the film based on real-life people and events, much of screenwriter Paul Rudnick’s script is pure fiction assembled with the more outrageously camp aspects of the life of Susann and Mansfield magnified. Other than her unending desire for fame, there isn’t any attempt to paint a rounded portrait of the individual at the focus of the film nor of any of the people in her orbit. Does Irving really think Jackie’s every word and move is as great as he always says or is it an act for her benefit? Is theirs a union of love or a business arrangement where he acts as her agent and manager? Does her fame from writing three number one best sellers bring her the joy she always wanted or is her fame and success empty and unfulfilling? It would be nice if some of these questions had been explored, but Paul Rudnick, ace comedy stylist that he is in his wonderful plays like I Hate Hamlet, Jeffrey and The Most Fabulous Story Ever Told, seems content to pepper the screenplay with quips at the expense of any in-depth characterizations or explorations of people’s deeper feelings. Director Andrew Bergman handles one farcical scene with notable skill: a madhouse breakfast meeting where her new editor attempts to talk business with the manic Mansfield and Susann while being kibitzed by Jackie’s best friend Florence (Stockard Channing) and Jackie’s manicurist currently filing her poodle Josephine’s nails. Bergman also does well with the elaborate launch party at the Waldorf for Valley of the Dolls with entertainment by Steve Lawrence (played by his real-life son David) and Eydie Gormé (played by Tony winner Debbie Gravitte). One other notable scene for trivia lovers happens when Irving takes Josephine for a walk down Shubert Alley where we see window cards for some of the current and upcoming Broadway shows: Luv, Funny Girl, Flora the Red Menace, What Makes Sammy Run, and Barefoot in the Park.

Though she was eager to play the role, Bette Midler is completely miscast as Jacqueline Susann, and she plays her to the rafters in an unsubtle and completely overpowering manner. Frankly, Stockard Channing who plays her best friend Florence and is completely wasted in the movie would have been far more solicitous casting as Jackie, her being able to embrace Jackie’s unquenchable ambition with the quieter heartbreak with her autistic son and the dire cancer diagnosis that plagues her final decade of life. Nathan Lane, if you can believe it, plays Irving completely straight neither going for campy laughs nor over-the-top reactions to Jackie’s high or low points. It’s a Nathan Lane we’ve seen very seldom either in the movies, on television, or on stage, and it’s one of the film’s few appealing positives. David Hyde Pierce gets to run a spectrum of reactions from outrage to acceptance as his pomposity is leavened with growing admiration for Jackie’s voracious drive and optimism. John Cleese gets to wear some absurd period threads as the head of the publishing house, but he’s otherwise fairly negligible in the movie, and Amanda Peet only gets a moment or two to shine as well.

The film’s 1.85: theatrical aspect ratio has been faithfully rendered in a 1080p transfer using the AVC codec. The image throughout is first-rate with excellent and consistent color saturation, fine black levels, and well-modulated contrast. There are no problems with age-related artifacts in the image. The movie has been divided into 9 chapters.

The DTS-HD Master Audio sound mix is offered in both 2.0 stereo and 5.1 surround mixes with the latter being the default mix. While dialogue is completely understandable in the center channel, the sides and surrounds are mostly used for the Burt Bacharach background score with little ambiance offered in them otherwise.

Audio Commentary: Australian film historians Sally Christie and Emma Westwood have a lively chat about the film’s pluses and minuses (and don’t spare the criticism where it’s deserved) but sometimes go off into lengthy and rather uninteresting tangents about Russ Meyer’s Beyond the Valley of the Dolls that have little or nothing to do with the film they’re meant to be commenting on.

Filmed for $44 million (and you’ll be searching high and low to find inside the film where that expenditure went), Andrew Bergman’s Isn’t She Great doesn’t manage to offer a convincing or identifiable screen biography of celebrated author Jacqueline Susann. The period views of New York City are lovely, and there are some actors who are really bending over backwards to make this work, but on the whole, the project must regretfully be labeled a misfire.

Thanks you for the review. This does not sound like my kind of movie.

Robin9 said:
Thanks you for the review. This does not sound like my kind of movie.
Click to expand...

It's a great disappointment. With a cast this talented and an intriguing life story to tell, it should have been far better.

I remember my mother and I saw the film in a nearly empty theatre.

Judgment had obviously been rendered on it quickly as even Bette Midler's ill-fated eponymous CBS sitcom around the same time threw shade at both it and the cinematic equivalent of the Yugo that was Drowning Mona.
H

This film really does rate as one of the great missed opportunities. The real Jacqueline Susann had a very interesting life story, and if they had just tried to tell half of it accurately, it would have been a good movie. Unlike some biographies, there was no need to change the truth to make it entertaining.

The only bit of interest in retrospect is the casting of Nathan Lane. At the time, there was a lot of ridicule about how such an obviously gay actor was miscast as her husband. However, I've since seen it alleged that Irving Mansfield was really gay, which would make it more accurate. That's not to mention Jaqueline Susann's real life bisexuality, which (if memory serves - I haven't seen it since it was new) is also omitted in the movie.

If they changed this much, then why even claim it's about Jacqueline Susann? Why not just do what she did and create a character inspired by her? Then maybe that same cast could have been put to better use. In addition to skirting over her sexual orientation, the fact that her son had autism got basically one short scene with no emotional impact whatsoever. It's the sort of thing that makes me want to dig out Wednesday Addams' "your work is puerile and underdramatized" diatribe from Addams Family Values. I'd be using Rudnick's own words against him. Nathan Lane played a cop in that movie a year before The Lion King changed his life forever.
Last edited: Mar 20, 2021
You must log in or register to reply here. 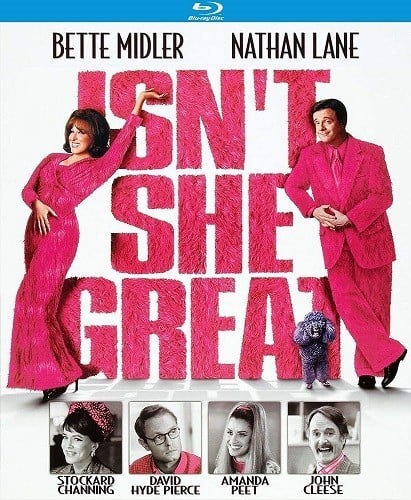