Forum List What's new Dark Style Change width
Log in Register
What's new Search
Menu
Log in
Register
Navigation
Install the app
More options
Dark Style
Close Menu
Posted on March 21, 2021 by t1g3r5fan
You are using an out of date browser. It may not display this or other websites correctly.
You should upgrade or use an alternative browser.
Val Lewton chiller debuts on Blu 4.5 Stars

In the 1940’s, the undisputed master of horror among film producers was Val Lewton. Starting with Cat People (1942), Lewton specialized in a series of stylish and moody psychological thrillers, a couple of which were directed by some up and coming directors in Hollywood like former film editors Robert Wise (The Curse of the Cat People & The Body Snatcher) and Mark Robson (The 7th Victim & The Ghost Ship); the latter would reunite with Lewton for Isle of the Dead. Previously released by Warner Bros. on DVD as part of a box set devoted to Val Lewton, the studio has revisited the movie for its Blu-ray debut as part of the Warner Archive series.

“Under conquest and oppression, the people of Greece allowed their legends to degenerate into superstition; the Goddess Aphrodite giving way to the Vorvolaka. This nightmare figure was very much alive in the minds of the peasants when Greece fought the victorious war of 1912.” – Final opening title card

General Nikolas Pherides (Boris Karloff) is a by the book general whose beliefs in what’s real and what’s not are about to get tested. It happens when he and accompanying correspondent Oliver (Marc Cramer) visit the grave of the general’s wife on a secluded island off the coast. A simple visit turns into an ordeal when the septicemic plague reaches the island and forces them and the few residents of the island to quarantine. However, that becomes the least of their worries when the superstitious housekeeper begins to convince the general that a peasant girl among them is really the vorvolaka – a vampire in Greek mythology – in the flesh…

Underrated by most standards, Isle of the Dead is nonetheless one of the best psychological horrors Val Lewton ever produced outside of Cat People. What started out as an adaptation of Sheridan Le Fanu’s Carmilla in pre-production emerged as a battle between superstition and scientific fact – courtesy of screenwriter Ardel Wray with uncredited contributions from Lewton and Josef Mischel – amidst a plague in the final cut, playing out on a set clearly modeled after the eponymous painting by Swiss artist Arnold Böcklin (which is also used during the opening credits). Under the direction of Mark Robson, the film never lags in its brief running time, which allows the slow burn suspense to fully take hold, especially after when General Pherides starts to seriously believe in the existence of the vorvolaka in their midst. There’s really not much to complain about here, except for the fact that it ends too soon. All in all, Isle of the Dead is a remarkably crisp little chiller that’s worthy to be talked about more among the greatest horror movies to come out of Hollywood during the Golden Age; it even has a notable fan who considers it one of the scariest movies of all time: director Martin Scorsese.

Making one of his first films in Hollywood after a successful run on Broadway in Arsenic and Old Lace, Boris Karloff lends an air of tragedy and congeniality to the doomed General Pherides; he would also appear in The Body Snatcher (his last appearance alongside fellow Master of Horror Bela Lugosi) and Bedlam (1946) for Val Lewton at RKO. After working as a contract player for Paramount Pictures prior to this movie, Ellen Drew was likely given her best film role as a peasant girl Thea, suspected of being the vorvolaka; she would later move into television following a decline in film roles. Marc Cramer is an OK – if somewhat blasé – romantic lead while Katharine Emery is equally elegant and tragic as the wife of a British diplomat whose own illness will factor in the film’s climax. Rounding out the cast here are Helene Thimig as the superstitious housekeeper Madame Kyra, Alan Napier as the diplomat stranded on the island due to the conflict, Jason Robards Sr. as the archaeologist living on the island, Ernst Deutsch as Dr. Drossos, who learns that superstition can be just as powerful as scientific fact and Skelton Knaggs as the ill fated British tinsmith whose death signals the appearance of the septicemic plague on the island.

The film is presented in its original aspect ratio, taken from a 4K scan of the original nitrate camera negative for this release. Film grain is organic, with inky blacks and gray scale and fine details all given a strong and faithful representation here; there’s nearly no instances of dirt, print damage, scratches or warping present here. This is by far the best the movie has ever looked on home video and very easily surpasses the previous DVD edition.

The film’s original mono soundtrack is presented on a DTS-HD Master Audio track for this release. Dialogue is strong and clear along with the sound mix and mournful Leigh Harline score (supposedly using some motifs from the Sergei Rachmaninoff tonal poem that shares the same name of the film) being given a faithful presentation as well. There’s little to no problems here like distortion, hissing or crackling present here which means that this release also represents the best the movie will ever sound on home video, marking another improvement on the previous DVD.

Commentary by film historian Dr. Steve Haberman – Newly recorded for this release, Haberman shares the background behind the making of the movie and how it evolved from an adaptation of Carmilla to what ended up on the screen in addition to the background on the cast and crew involved.

Theatrical Trailer with Spanish subtitles (1:29) – This is likely taken from a 1951 re-release of the movie.

As part of Val Lewton’s defining work in the field of psychological horror, Isle of the Dead is a major – if somewhat overlooked – entry in the genre that still generates chills today. Warner Archives continues to be one of the best boutique labels in the game with this release, featuring a stunning HD transfer that’s leaps and bounds better than previous home video incarnations of the movie in addition to including a new commentary track and a trailer previously unseen on home video as well. Very highly recommended and an easy upgrade from the previous DVD release.

I love this. Now Warner Archive please give us THE SEVENTH VICTIM and I WALKED WITH A ZOMBIE.

Can't load this review on both my old 2010 iMac and my 2020 MacBook Air.
It will load on my Samsung Cell phone.
You must log in or register to reply here. 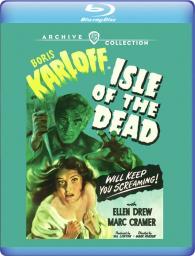