A fractured family several of whom are on the brink of self-destruction comes into focus in Woody Allen’s stark Interiors.

A fractured family several of whom are on the brink of self-destruction comes into focus in Woody Allen’s stark Interiors. A shocking change-of-pace for the writer-director after years of celebrated and popular comedies, Interiors has only incidental humor concentrating instead on the interiors (a doubly symbolic title) of several people struggling with artistic frustrations amid personal lives which are likewise crumbling. Though much more of a critical than audience success, the movie was merely the first attempt (of several more to come in the years ahead) by Allen to extend his range as an artist, to concentrate on the dramatic complexities of living rather than only in the comedic ones.

When patriarch Arthur (E.G. Marshall) announces to his family that he’s embarking on a separation from controlling wife Eve (Geraldine Page), it throws her and two of their three daughters into turmoil. Both Renata (Diane Keaton), a poet who’s currently undergoing writer’s block, and Joey (Mary Beth Hurt), who can’t seem to find a fulfilling outlet for her artistic ambitions, become edgy and snappish with their respective significant others: uncelebrated author Frederick (Richard Jordan) and political strategist Mike (Sam Waterston) while Eve completely goes to pieces considering the end of the marriage as a failure on her part from the perfection she constantly seeks and leading to a suicide attempt. The estranged couple’s third daughter Flyn (Kristin Griffith), an actress, is the most satisfied of the bunch even though she’d rather be making feature films than doing television roles. Though Eve tries to convince herself that a reconciliation with Arthur is possible, his happy introduction to the family of the vivacious Pearl (Maureen Stapleton) certainly seems to put the kibosh on those hopes, much to the chagrin of two of the children, especially Joey who most feels the responsibility of keeping her mother on an even keel.

Clearly Woody Allen has drawn on the works of Ingmar Bergman for his inspiration for Interiors with its cold, pale earth-toned color palette and carefully designed sets, its somber moods of frustration and controlled angst (which occasionally erupt into blistering reactions: an ugly scene in a chapel where burning candles are bashed and broken and a near-rape in a garage), a very static camera (the astounding Gordon Willis at the helm) that rarely moves but prefers to capture life in corners, behind bannisters, and through doorways, and with a fondness for compositions in silhouette where characters murmur isolated thoughts while occasional shots of past events play before our eyes. This cold monotone of surroundings and behaviors is broken with the eruption into the picture of Maureen Stapleton’s extroverted Pearl dressed in blazing red and bringing a down-to-earth vivacity to a world which previously had been concerned with roiling internals and overly enunciated speech. She’s an Earth Mother type: loves to dance, loves her steak blood red, and believes life is to be lived and not discussed so much, and her introduction both brings the breath of life to the movie (and later to Joey in an ironic turn of events) and at the same time hastens it to its conclusion since Arthur’s interest in her quashes any hope Eve had of getting back with him to preserve her façade of a perfect family. Woody Allen has not given all of his characters equal consideration (he’d do better with later films like Hannah and Her Sisters and Another Woman) resulting in an unbalanced work with some people we’re forced to be with we don’t much care about (the annoying Joey and her off-putting moody disposition) and other people like Mike and Frederick whom we’d like to get to know more about.

But the film’s two prime attractions are its veteran actresses Geraldine Page and Maureen Stapleton, and they’re both simply sensational as women who couldn’t possibly be more opposite: the needy, emotionally frail Eve and the powerhouse liver of life Pearl. Both actresses earned well-deserved Oscar nominations for their work, and Stapleton won supporting actress honors from both the Los Angeles and New York critics’ circles. Allen muse Diane Keaton is quietly exasperating as she works her way through Renata’s writer’s block and a tottering marriage, and Mary Beth Hurt does all she can with the impossibly whiny Joey, the youngest daughter whom both parents for some reason seem to favor and seek her approval of their actions. We really feel Richard Jordan’s frustration at not being able to find his author’s voice and who ends up teaching and writing scathing reviews of authors whose work he detests. E.G. Marshall and Sam Waterston both do just fine with roles that are slightly underwritten (especially Waterston’s Mike), and Kristin Griffith who pops in and out as a working actress not much involved in the chaos in the lives of her parents and siblings is more than adequate.

The film has been framed at its theatrical aspect ratio of 1.85:1 and is presented in 1080p resolution using the AVC codec. The grain structure of the original photography has been respected in this transfer even if there are a few bits of dust and dirt and some weaker black levels and contour issues with the encode. Colors are warm and flesh tones realistic throughout, and the vivid colors Maureen Stapleton wears (a treat after the lengthy moments of all earth tones, cold grays, and pastels) are bright but never bloom. The movie has been divided into 24 chapters.

The DTS-HD Master Audio 2.0 mono sound mix features excellently recorded dialogue which has been skillfully combined with ambient sounds like crashing waves at the beach. There are no problems with age-related artifacts like hiss, pops, or crackle. There is no music score, the only music coming from a party scene after a wedding where records are played for dancing.

Six-Page Booklet: contains some color stills, original promotional art on the back cover, and film historian Julie Kirgo’s enthusiastic endorsement of the movie.

A decided change of pace from his early comedy films, Interiors displays a more serious side of Woody Allen that would be more and more in evidence during the next decade or so of movies after its premiere. With its uneven character sketches, it’s not his best drama, but there are certainly worthwhile elements here that deserve study. There are only 3,000 copies of this Blu-ray available. Those interested in purchasing it should go to either www.twilighttimemovies.com or www.screenarchives.com to see if product is still in stock. Information about the movie can also be found via Facebook at www.facebook.com/twilighttimemovies. 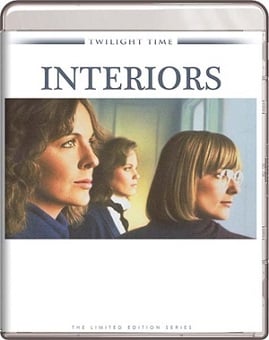