Forum List What's new Dark Style Change width
Log in Register
What's new Search
Menu
Log in
Register
Navigation
Install the app
More options
Dark Style
Close Menu
Posted on June 18, 2017 by Matt Hough
You are using an out of date browser. It may not display this or other websites correctly.
You should upgrade or use an alternative browser.
Muddled comedy offers a different take on the inept French detective. 2.5 Stars

Bud Yorkin’s Inspector Clouseau certainly can’t compare to any of the Clouseau efforts starring the legendary Peter Sellers, but on its own it contains enough comic inspiration and a decent enough leading performance to be worth a rental if for comparison’s sake if nothing else.

When Peter Sellers decided (for the first time) that he had had enough of playing Inspector Jacques Clouseau after two acclaimed films, Alan Arkin, whose solid acting skills and nimble improvisational talent had impressed Hollywood producers, became the likeliest candidate to do the character proud in a third film featuring the bumbling French detective. Inspector Clouseau, unfortunately, pleased no one least of all its accomplished star who considered this one of his greatest career missteps. Seen in retrospect, the film doesn’t fully work, and Arkin’s inept inspector isn’t as nonsensically bumbling as Sellers’ inspired creation, but there are laughs to be had here, and the film serves as a decent bridge between Sellers’ two different runs as the character in the decades of the 1960s and the 1970s.

When the Great Train Robbery in England results in the loss of £2.5 million, Scotland Yard asks for the assistance of the French Surete who lends their most valuable detective Jacques Clouseau (Alan Arkin) to aid their cause. Scotland Yard Commissioner Sir Charles Braithwaite (Patrick Cargill) is convinced that this one robbery is merely a prelude to a bigger scheme being hatched by three men they have their eyes on: Frenchie LeBec (Tutte Lemkow), Steven Frey (Michael Ripper), and Addison Steele (Barry Foster). But there is also a Mr. Big of whom they are unaware, and they suspect there may be a rat among the Scotland Yard inspectors, too. After Superintendent Weaver (Frank Finlay) demonstrates some special gadgets Clouseau has requested, Jacques and undercover agent Lisa Morrel (Delia Boccardo) are off on their investigation, neither realizing that Clouseau is very much a part of the scheme which has been dreamed up by the son of the prison warden Clyde Hargreaves (Clive Francis) who as Randy Rainbow is the dastardly Mr. Big they’re all looking for.

The screenplay by Tom and Frank Waldman offers a decent mix of the kind of bumbling slapstick which punctuates all of the Clouseau films and a convoluted story that works on paper better than it works in actuality (the multiple bank robbery plot in thirteen different cities really makes no sense) with, as usual, Clouseau’s befuddlement the very thing that proves the gangsters’ downfall. Many of the slapstick set pieces work just fine with director Yorkin’s timing and Arkin’s droll performance working in synch: some opening foolishness with Clouseau trying to disembark from an airplane, funny give and take in the Commissioner’s office, his usual ineptitude with gadgets, and his innocent seriousness over childish things like a game of jacks, but the plotting of the heist involves too many working pieces, and its resolution in the film is a real mess. As usual, Clouseau catches the eye of beautiful women and one not so beautiful Mrs. (Weaver’s wife played by the great Beryl Reid) though the sequence with Arkin and Reid seems like padding.

Alan Arkin gives his stab at Clouseau the ole college try, but his innate intelligence continually manages to peep through Clouseau’s clumsiness and bewildered grasp of the matters at hand and thus his puzzlement never rings quite true (and the character’s acknowledgement of his inept ignorance near the end seems unthinkable in Sellers’ Clouseau). He doesn’t play with the accent like Sellers was prone to do with more and more absurdity as the years went along, but he’s certainly game for the pratfalls that taking on this role entails. (It’s still a far better impersonation of the character than Steve Martin pulled off in his two attempts at the detective inspector). Frank Finlay gets to play the complex character of Superintendent Weaver with some shades of deception that add a little dimension to the comic adventure, but there is no real Dreyfus substitute here for Clouseau to use as the continual recipient of his carelessness: neither Patrick Cargill’s Braithwaite nor Richard Pearson’s Shockley really serve as actual foils to the floundering Frenchman. Delia Boccardo is a decent love interest, and Clive Francis and Barry Foster adequately convey the essence of the bad guys Clouseau is trying to overcome.

The film’s original Panavision aspect ratio of 2.35:1 is faithfully rendered in this 1080p transfer using the AVC codec. After the rather soft looking opening credits (which feature The Inspector in a series of funny animated scenarios), sharpness is fairly consistently good. Color is even better with very good saturation levels nicely controlled and accurate flesh tones. Black levels are fine, and contrast, while usually consistent, can waver a bit in the odd scene or shot. There are occasional dust specks and a little debris here and there, but it isn’t tremendously distracting. The movie has been divided into 8 chapters.

The DTS-HD Master Audio 2.0 mono sound mix offers good basic fidelity. Dialogue has been well recorded and has been combined confidently with Ken Thorne’s zippy background score and the appropriate atmospheric effects as needed. There are no problems with age-related hiss, crackle, or flutter.

Audio Commentary: film historian William Patrick Maynard offers a fine audio commentary praising the film for its strengths while acknowledging its weaknesses without apology. He also relates various set pieces in the film to similar pieces in other films in the long Pink Panther filmography. There are some quiet spots during the unfolding, but it’s a worthwhile listen.

Bud Yorkin’s Inspector Clouseau certainly can’t compare to any of the Clouseau efforts starring the legendary Peter Sellers, but on its own it contains enough comic inspiration and a decent enough leading performance to be worth a rental if for comparison’s sake if nothing else. The Kino Lorber Blu-ray edition offers well above average video and audio for the viewer’s consumption.

Man Without a Star – Blu-ray Review 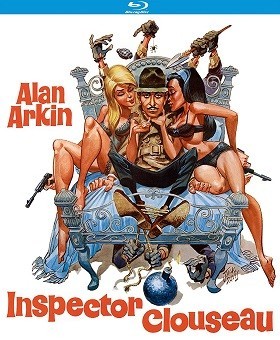