Meant to be a black comic examination of the current social media generation who must document its entire life on-line for all the world to see, Matt Spicer’s Ingrid Goes West is more depressing than revelatory, its leading character a charmless, aimless flake whose lack of intelligence and ambition leads to a life of empty, soulless striving for recognition.

Meant to be a black comic examination of the current social media generation who must document its entire life on-line for all the world to see, Matt Spicer’s Ingrid Goes West is more depressing than revelatory, its leading character a charmless, aimless flake whose lack of intelligence and ambition leads to a life of empty, soulless striving for recognition. There’s a lesson to be learned here, but it isn’t clear that the film is cognizant of its own sermon.

Obsessed with social media on Twitter and Instagram to the point of mania, Ingrid Thorburn (Aubrey Plaza) has burned all of the bridges in her hometown after feeling rejected by someone she considered her friend, gathers up her inheritance of $60,000 from her mother’s death, and heads to California to meet and attempt to insinuate into her life her latest on-line crush, sponsor-supported Instagram celebrity Taylor Sloane (Elizabeth Olsen). Kidnapping Taylor’s terrier and then pawning herself off as its rescuer, Ingrid strikes up a casual friendship with Taylor though the comradeship seems more dependent on the ways Ingrid can help Taylor out such as borrowing a truck to haul some things for her, buying a piece of art from her talentless husband Ezra (Wyatt Russell), and providing an ear for Taylor to confess to when her hubby is otherwise occupied. But Ingrid is more than content with such a user arrangement until her idyllic life of leisure is disrupted by a new friend in Taylor’s life, another Instagram celebrity Harley Chung (Pom Klementieff), and the appearance of Taylor’s scheming, drug-fueled wild-man brother Nicky (Billy Magnussen). Nicky suspects something is off with Ingrid and does what he can to sniff out her real agenda in regards to his sister.

Director Matt Spicer has collaborated with David Branson Smith to fashion this look into the world of social media obsessed-millennials, unable to be separated from their phones for more than a few minutes at a time and constantly posting any and every thought that occurs in their heads whether their opinions have any validity gained through study or rational thinking or not. Ingrid is an extreme case of such vapidity, a desperate young woman eager to leech onto the first famous face who throws her even a scintilla of attention. Though the younger generation may find such behavior amusing, it’s actually quite depressing to see someone with no ambition other than to be associated with someone famous and whose lifestyle must be supported by others rather than from honest work or the use of her own innate talents and abilities. Director Spicer certainly gives us an authentic looking and feeling atmosphere for these media celebrities: everything rings true for this kind of lifestyle portrayal: the thoughtlessness, the selfishness, the irresponsibility, and above all the insincerity with friendships that evaporate more quickly than dew on grass and secrets shared but not kept private when the information can be used for one’s own ends. At no moment in this rather sour and sullen film does one feel good about what’s transpiring between these people. It’s all about using and being used, a disheartening theme that doesn’t make for a memorable bit of entertainment.

Aubrey Plaza’s Ingrid is certainly a believable manic-depressive, ingenious enough to worm her way into a relationship with her targets but not intelligent enough to sustain that interest or keep her intentions private. But her stalkerish behavior is downright creepy for much of the movie (when the friendship begins to tank, her behavior becomes more and more extreme and disquieting) and definitely not funny. (The film’s gooey ending seems to suggest that Ingrid will have learned nothing from her horrific travails, definitely a depressing thought.) Elizabeth Olsen nails the insipid Taylor beautifully, an invented celebrity who lives off of paid-for opinions that mean nothing and feelings that are millimeters deep. O’Shea Jackson Jr makes a strong impression as the Batman-obsessed screenwriter Dan Pinto, Ingrid’s landlord who also gets used by her but who develops serious feelings for her. Billy Magnussen has the showboat role of out-of-control Nicky who exploits his sister’s celebrity for his own ends, and Wyatt Russell has a major scene or two as Taylor’s put-upon husband who’s tiring of the plastic lifestyle they’re leading.

The film is presented in its theatrical aspect ratio of 2.40:1 and is offered in 1080p resolution using the AVC codec. Sharpness is excellent throughout, and color saturation levels are nicely controlled with believable skin tones. The transfer’s only real lapse comes in some nighttime scenes which reveal less than state-of-the-art blacks. Other than that, this is a first-rate transfer. The movie has been divided into 10 chapters.

The DTS-HD Master Audio 5.1 sound mix offers better than average fidelity but not a great amount of immersion in the L.A. lifestyle. Dialogue has been routed to the center channel. Nick Thorburn’s background music does get the front and rear channel treatment, but the environs of Los Angeles, Venice Beach, Joshua Tree, and other southern California sites don’t present the kind of atmospheric ambiance that one would hope for.

Audio Commentary: director-writer Matt Spicer, co-writer David Branson Smith, and star Aubrey Plaza have a laid back but not very interesting discussion about the making of the film. Spicer does the most talking punctuated with come profanity-laced comments from Plaza, but it’s not especially revelatory.

Deleted Scenes (8:12, HD): three scenes can be watched together or separately and also offer optional commentary from Spicer, Smith, and Plaza.

The moodily depressing ambitions of a celebrity stalker are examined in Matt Spicer’s Ingrid Goes West, but the journey with her is not much fun. As an examination of an aimless and inevitably unfulfilling lifestyle, the film scores some points, but a rental might be a better option for this particular entertainment. 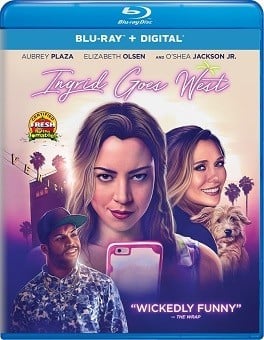