Forum List What's new Dark Style Change width
Log in Register
What's new Search
Menu
Log in
Register
Navigation
Install the app
More options
Dark Style
Close Menu
Posted on February 27, 2017 by Matt Hough
You are using an out of date browser. It may not display this or other websites correctly.
You should upgrade or use an alternative browser.
Tepid horror picture with a decent premise and weak execution. 2 Stars

To its credit, Brad Peyton’s Incarnate makes a play for a new take on demonic possession and exorcisms, and that’s the most interesting aspect of this otherwise tepid and unsatisfying horror programmer.

To its credit, Brad Peyton’s Incarnate makes a play for a new take on demonic possession and exorcisms, and that’s the most interesting aspect of this otherwise tepid and unsatisfying horror programmer. But the writing lets down the cast of hard-working and dedicated actors, establishing new ground rules for this style of exorcism movie and then either complicating them unnecessarily or blithely ignoring them in its desperate attempt to frighten its audience. Horror fans may want to sample the merchandise, but all others can remain safely at a distance.

When eleven-year old Cameron (David Mazouz) is possessed by a demon and is unresponsive to traditional Catholic exorcism rites, Vatican representative Camilla Marquez (Catalina Sandino Moreno) recommends the services of Dr. Seth Ember (Aaron Eckhart) who has successfully exorcized demons not by the usual Catholic chanting and rituals but by actually entering the subconscious of the victim and convincing the victim that the demon is creating a pleasurable fantasy world in order to maintain control and offering them a means of escape. Ember’s initial journey into Cameron’s subconscious reveals the demon to be Maggie Grant (Natalija Nogulich), the demon responsible for killing his wife and son and crippling him for life in a head-on car accident. He realizes he’s going to need every tool in his arsenal to defeat the vengeful Maggie, and even with his assistants Oliver (Keir O’Donnell) and Riley (Emily Jackson), it’s likely going to be a fight to the death to release the boy from the demon’s control.

Ronnie Christensen’s screenplay fills us in on Ember’s methodology with the initial demon fight we view in the opening scenes, and each time Ember enters the subconscious of a victim, he himself returns to his pre-accident mobility and fighting trim, all good ideas that allow us to keep reality separated from the subconscious battleground. But one of the key rules that gets repeated over and over is that no one is to touch a person possessed until the demon is expelled (touching allows for demon transference), and yet the touching happens over and over during the movie to the point of infuriation and makes the conclusion, for one, so anticlimactic as to be totally predictable. Director Brad Peyton moves things along at a brisk clip (the movie runs less than ninety minutes, so it doesn’t overstay its welcome), but apart from a few cheap scare tactics (the homeless woman whom Maggie has possessed to gain entrance into Cameron flashes in the background before pouncing on the young boy all keyed to shrieking screech shots on the soundtrack), the movie is really bereft of genuine fright moments (even a taunting demonic voice emanating from the little boy isn’t really spooky compared to other possession films involving children) and will likely not please horror junkies or gore fanciers (the rating is PG-13, and the unrated version runs less than one minute longer).

Aaron Eckhart gives a thoughtful, dedicated performance even with this second-rate material to play, and he really captures the fit, sturdy jock persona in the possession scenes and the wreckage of a man who’s lost almost everything in the real world scenes. David Mazouz who’ll be familiar to Gotham fans as the young Bruce Wayne made this several years ago before his recent growth spurt and does a decent job especially in the subconscious realm scenes with his dad played quite convincingly by Matt Nable. Carice van Houten is suitably anxious as Cameron’s distressed mother Lindsey, and Catalina Sandino Moreno is likewise competent as Vatican representative Camilla. Ember’s assistants played by Keir O’Donnell and Emily Jackson are quite good.

The film is framed here at 2.40:1 and is presented in 1080p resolution using the AVC codec. It’s an outstanding transfer with superb sharpness and excellent color rendering especially in the dream state fantasy scenes which picture everything from a nightclub to a blissful park to a carnival draped in darkness. Black levels are quite commanding, and the image is reference quality all the way. The movie has been divided into 20 chapters.

The DTS-HD Master Audio 5.1 sound mix is loud and is most effective with its punctuated jolts of score to shock the viewer with unexpected shrieks and excellent rumbling bass for the LFE channel. The score by Andrew Lockington does get filtered into the front and rear soundstages, but dialogue is rooted to the center channel, not quite as effective as it might have been if the disembodied voice of the demon had been placed in a variety of available channels. Ambient sounds do get placed in the proper channels for maximum impact.

A forgettable and not very frightening horror film, Incarnate wastes the talents of some good actors in a script with a decent premise but a less than satisfying execution. Those interested will certainly not be disappointed with the technical quality of the disc with reference video and very good audio to recommend it. 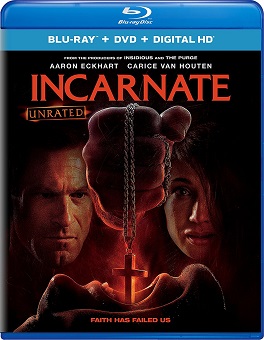