Drawing from the writings of H.P. Lovecraft, John Carpenter’s In the Mouth of Madness represents a unique kind of horror film – one that manages (or at least dares) to be both cerebral as it is visceral in its content. Visually, it can hold its own among the director’s best work; at the same time, the movie has, in a way, become a endpoint for the director as the quality of his output from here on out (in terms of consistency) has diminished compared to his previous offerings. Previously released on Blu-ray by Warner Brothers, Shout Factory has licensed the film for its “Scream Factory” line and given it the “Collector’s Edition” treatment.

“Do you read Sutter Cane?”

Sutter Cane (Jurgen Prochnow) is a renowned horror writer whose books are more popular than Stephen King’s and have a profound psychological effect on his readers, often leading to insanity and acts of violence. When the author disappears two months prior to the wide release of his latest book, In the Mouth of Madness, investigator John Trent (Sam Neill) is called upon by Cane’s publisher (Charlton Heston) to find the writer and obtain the manuscript for the new novel. With book editor Linda Styles (Julie Carmen) in tow, Trent sets off to find Cane in New Hampshire and arrives in Hobb’s End, the town often mentioned in the books. It’s here that the lines between fiction and reality become blurred and eventually, Trent comes to the horrifying realization that “reality isn’t what it used to be”.

As the informal finale to John Carpenter’s Apocalypse Trilogy – the other installments being The Thing (1982) and Prince of Darkness (1987) – In the Mouth of Madness functions as both an affectionate nod to the works of H.P. Lovecraft and Stephen King and a greater commentary on the nature of madness within the real world. Within the smattering of references to the famed horror writers, we actually hear musings on the nature of reality – “A reality is just what we tell each other it is”, as Styles points out to Trent in one exchange; it’s that kind of thinking (courtesy of Michael De Luca’s script) that helps elevate the movie into something more than what it appears on the surface. It also doesn’t hurt that the special effects and creatures help to complement the story rather than supersede it; for the most part, the monstrous creations remain in the shadows and we’re given a sense of their hideous nature, another trait of a horror movie with both brains and scares in equal doses.

Sam Neill is solid in the lead as John Trent, whose own connections to Cane become revealed in the final third of the movie reveal a metaphysical nature to the proceedings. As the notorious Sutter Cane, Jurgen Prochnow casts a memorable impression in his few scenes in which his writings take on an otherworldly life of its own. Julie Carmen – as Linda – furnishes the story with both a love interest and sparring partner for Trent as well as a scene involving a spider walk that’s better seen than talked about here. In what basically amounts to an extended cameo, Charlton Heston lends some dignity and prestige to the project as Jackson Harglow, the publisher who has made a fortune from Cane’s works and wants Trent to find Cane’s latest. Rounding out the cast in brief yet noticeable parts are David Warner as the asylum doctor who interviews Trent, Bernie Casey as a friend and colleague of Trent’s, John Glover as the head orderly of the insane asylum, Carpenter regular Peter Jason in basically a walk-on part as another colleague of Trent’s, Frances Bay as the kind proprietress of the Inn harboring one of Hobb’s End’s dark secrets, and in an uncredited role as a paper boy, Hayden Christensen.

This HD transfer of the film is taken from a recent 4K scan of the original film elements performed by Warner Bros. Suffice it to say, this presentation of the movie is outstanding and represents the best it has looked on home video. Grain structure is sturdy and organic throughout, with inky blacks, even color palette, and fine details noticeable. Watching fiction and reality blur never looked so good, making this another quality effort from Shout/Scream Factory.

The film’s original stereo soundtrack is represented wonderfully on the 5.1 DTS-HD MA track on this release. Dialogue is sharp and clear, along with the sound effects, and the music – courtesy of John Carpenter and Jim Lang – has an extra oomph to it, further punctuating the mood and madness. Again, another great job by Shout on this end.

Commentary by John Carpenter and Sandy King Carpenter – Newly recorded for this release, the director and producer (as well as husband and wife) share some recollections on the production. While it does cover some familiar territory from the previous commentary, they do share some interesting details from their personal lives around the time of production, making this a both engaging and insightful complementary track.

Commentary by John Carpenter and Gary B. Kibbe – Carried over from the previous Blu-ray release, the director/composer and cinematographer go over some anecdotes on the production, but mostly go over how each scene was staged and lit during shooting, making this an interesting track highlighting the filming process.

Horror’s Hallowed Grounds (11:30) – This episode of the Sean Clark hosted series revisits the shooting locations of the movie – much of it was shot in Canada – and how they appear today compared to the movie.

The Whisperer of the Dark: An Interview with Actress Julie Carmen (9:46) – The actress, who portrayed Linda Styles in the movie, shares her memories and feelings of working on the movie with John Carpenter as well as a few other interesting anecdotes.

Greg Nicotero’s Things in the Basement (16:34) – The renowned makeup artist shares some of the challenges in bringing the fantastic and grotesque creatures of In the Mouth of Madness to life, as well as a few snippets from his behind-the-scenes footage.

Home Movies from Hobb’s End (12:07) – Greg Nicotero’s behind-the-scenes footage reveal the process in creating the monsters, the makeup for some of the actors, and test footage of special effects for an alternate ending to the movie.

Vintage Featurette – The Making of In the Mouth of Madness (5:02) – Taken from around the time of production and shown as a tie-in to the movie’s release, featuring on-set interviews with John Carpenter, Sam Neill, Charlton Heston, Jurgen Prochnow, Julie Carmen, and a couple other members of the film crew.

In the Mouth of Madness wasn’t a huge success upon its initial release, but it has gained a nice cult following over the years due to its director and its heady blend of the visceral and the cerebral. Shout Factory has scored another success with this Blu-ray release, substantially improving on the previous Blu-ray with a great transfer of the film and decent offering of special features. If you’re a fan of Carpenter’s work or are just experiencing the movie for the first time, here’s your chance to pick up a copy; just don’t hold this reviewer responsible if the movie drives you into madness. 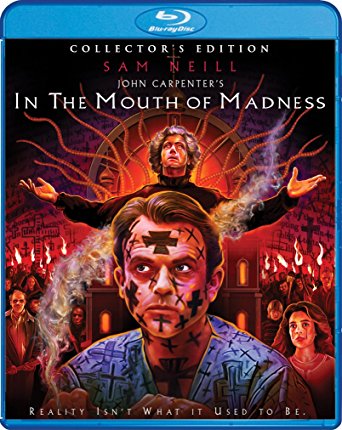