A disappointing fifth installment in the franchise 3 Stars

Time seems to have run out for the Ice Age franchise. The fifth entry in the series subtitled Collision Course offers the same slapstick situations and wacky characters mixed in with world-weary counterparts that the previous four films in the series have offered, but there’s very little that’s fresh here.

Time seems to have run out for the Ice Age franchise. The fifth entry in the series subtitled Collision Course offers the same slapstick situations and wacky characters mixed in with world-weary counterparts that the previous four films in the series have offered, but there’s very little that’s fresh here. The characters haven’t been expanded or enhanced in any major ways, so that even with a new story, we seem to have seen and heard it all before. Lackluster box-office returns at least on this side of the world seem to validate the feeling that this is a franchise that has played itself out.

Scrat’s unending pursuit of his cherished acorn leads to the possible immolation of the Earth as he stumbles onto an alien vessel which launches him into space where his blunders lead to a massive asteroid hurtling toward the Earth. Mammoth Manny (Ray Romano) had been fretting the upcoming nuptials for his daughter Peaches (Keke Palmer) who’s marrying the naïve and rather square Julian (Adam Devine), but with their destruction imminent, finding a way to deflect the asteroid becomes the only matter of real importance. They’re helped by old friend Buck Weasel (Simon Pegg) who had discovered an ancient obelisk in his underground world that described a nearby area where the magnetic field is strongest which is causing the asteroid to head toward that. If he and his friends can find a way to launch a magnetic meteor of their own, the asteroid will be drawn to it and deflect it away from Earth.

Written by Michael Wilson, Michael Berg, and Yoni Brenner, the science throughout is wholly suspect (could it be otherwise amid these literal looney toons) but is given the stamp of approval by visiting scientist Neil deBuck Weasel (voiced by Cosmos host Neil deGrasse Tyson with a wicked animated caricature of the country’s most famous physicist). But the plot is almost incidental when the movie is crowded with so many wacky characters, all existing more or less in their own world of self-amusement and outrageous clowning. Yes, the possum twins Crash and Eddie (Seann William Scott and Josh Peck) are back and as wild as ever, sloth Sid (John Leguizamo) has mating as his foremost consideration (the movie is determined to fix up in romantic relationships all of the primary grounded characters, even Wanda Sykes’ sassy Granny), returnee from Dawn of the Dinosaurs Buck enters singing the “Figaro” aria from The Barber of Seville by Gioachino Rossini (don’t even try to explain away the innumerable anachronisms in these movies) and gets crazier from there, and once the group reaches Geotopia, the center of the magnetic pull, we meet the gushy, metrosexual Shangri Llama (Jesse Tyler Ferguson). It’s all silly and frantic and wildly colorful, but even at an hour and a half, it’s hard to get invested in the plight of the characters or the danger they’re facing, and the comedy is so overly familiar with these characters (even the continual cut backs to the ever-bumbling Scrat who takes more punishment than Wile E. Coyote on his worst day) that it seems more tired than inspired.

While Simon Pegg stole the show in the third movie during his lengthy middle sequence as Buck, here he’s still appealing but a known quantity and thus only repeating madcap behavior we’ve seen before. If the film has villains, it’s three dino-birds (dromaeosaurs played by Nick Offerman, Max Greenfield, and Stephanie Beatriz) who go after Buck and his friends hoping the asteroid will wipe them out so their species can repopulate the world. They don’t pose enough of a threat to scare anyone other than the smallest tykes, but they do deliver a couple of funny lines. Jesse Tyler Ferguson’s Shangri Llama is a fun creation, and Adam Devine’s squareness allows Ray Romano’s Manny a target for lots of potshots as the father anxious about losing his little girl to another man, er, mammoth. Denis Leary’s Diego and his mate Shira voiced by Jennifer Lopez have less to do in this installment, and Queen Latifah is likewise underused as the understanding Ellie. As always, Seann William Scott and Josh Peck in their frenzied possum characters have their own movie going on while the major plot is unfolding around their nonsense.

The film’s 2.40:1 theatrical aspect ratio is faithfully rendered in this 2160p transfer using the HEVC codec. Sharpness is exemplary throughout, and the animation is more detailed than ever before (a bonus feature which recaps events from the first four movies shows the steady progress in the intricacies of CG animation since the series began in 2002). Color is bright and lushly saturated (Geotopia is particularly ablaze in fluorescent color), and contrast has been consistently applied. But HDR has been rather abused a bit on the movie making colors too vividly bright and occasionally bleaching highlights in various tones rather than more subtly emphasizing them. The movie has been divided into 24 chapters.

The movie was shown theatrically in 3D, and there appear to be quite a few scenes where outward projections would seem to be prominent in the presentation.

The Dolby Atmos theatrical sound mix (decoded on my equipment as the Dolby TrueHD 7.1 core) is all one would wish from the soundtrack of an animated feature. Dialogue is always easy to discern and has been placed in the center channel. The music score by John Debney along with several pop and classical interpolations gets sensational spread through the fronts and rears. The atmospheric effects might not have quite the sophisticated pans and thrusts across and through the soundstage, but there likely won’t be any complaints.

Scrat: Spaced Out (14:44, UHD): a mini-movie collating all of the Scrat scenes sprinkled throughout the movie with some added mayhem not previously seen. This is the only bonus feature on the UHD disc.

The Blu-ray disc enclosed in the case contains the following:

Ice Age: The Story So Far (13:15; HD): excerpts from the four previous films in the series introducing us to the major characters and events that have brought them to this point.

Scratasia: Scrat’s Solo Adventures (4:13, HD): highlights from the slapstick situations Scrat has found himself in during the five movies as he pursues his beloved acorn.

Mysteries of the Scratazons (5:13, HD): directors Michael Thurmeier and Galen Tan Chu and producer Lori Forte relate the backstory of the Amazon Scratazons who leave the obelisk and the spaceship that Buck and Scrat later stumble across.

Star Signs of the Animal Kingdom (4:42, HD): a discussion of the fanciful constellations in the sky based on the characters of Scrat, Sid, Buck, the possums Crash and Eddie, and Manny.

The Science of It All (9:18, HD): astrophysicist Neil deGrasse Tyson answers a series of questions about the veracity or lack thereof of the science in the movie.

Promo Trailers (HD): Trolls, The Book of Life, among others.

Fans of the Ice Age franchise may be thrilled to see their favorite characters come to life again in Collision Course, but the story and a lack of fresh ideas for the characters unfortunately let down the fifth installment of the series. 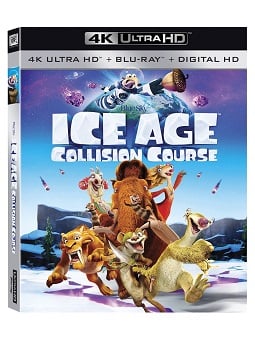