Fans of stars Henry Fonda and Joan Bennett (still in her blonde hair period) will be happy to see their 1938 drama I Met My Love Again once more widely available for viewing even if it doesn’t rank near the top of either of their best films.

1938 was a very important year for Henry Fonda. He made five films that year including two which have emerged as genuine classics: the romantic Oscar-winning drama Jezebel with Bette Davis and the screwball mystery The Mad Miss Manton with Barbara Stanwyck. Among his other films during the year was I Met My Love Again, a more typical romantic melodrama with Fonda and Joan Bennett playing lovebirds who are fated to be together despite numerous obstacles being hurled in their path. It likely played better then than it does now with a handful of rather disagreeable characters all somehow managing to inflict their will upon the couple. This scarcely-seen dramedy has presently been made more readily available through the efforts of Classic Flix who now brings the Walter Wanger-produced movie to DVD.

After being engaged for two years to studious, serious Ives Towner (Henry Fonda), eager and impulsive Julie Weir (Joan Bennett) is tired of waiting for her life to begin and impetuously elopes with the suave and worldly writer Michael Shaw (Alan Marshal). They live three madcap years in Paris where he doesn’t write a word and fritters their life savings away on endless partying. When he’s accidently killed at a party thrown by an eccentric painter (Henry Brandon), Julie must spend seven long years drudgingly making ends meet to support herself and their young daughter Little Michael (Genee Hall). When Julie finally tires of living hand to mouth in Paris, she accepts the generous invitation of her beloved Aunt William (Dame May Whitty) to return to America where she hopes to reunite with Ives. But he’s a biology professor now and completely disinterested in forming any attachments, even to calculating college student Brenda Wayne (Louise Platt) who’s continually throwing herself at him.

David Hertz’s screenplay is based on the novel Summer Lightning by Allene Corliss, but it emerges as a rather shaky amalgamation of comedy and melodrama with Ives’ eccentric family (meddling, overbearing mother played by Dorothy Stickney, airheaded sister Carol played by Florence Lake, and her doltish husband played by Alan Baxter) constantly trying to run his life (the film’s greatest conflict is whether Ives will eventually bend to their oppressive wills or assert his own claim for happiness). The ten years that Julie spends away from her loving Aunt William and the dryly devoted Ives is glossed over in Hertz’s script, not aided by the rather flat-footed direction by Arthur Ripley and first-timer Joshua Logan (with allegedly an additional assist by George Cukor). The directors don’t seem clear on what to do with the vampish college student Brenda either, allowing her to open Ives’ eyes to the fun in life he’s been missing (though the shaky professionalism and moral ambiguity involved in a college professor involved with an undergraduate doesn’t seem to have crossed their minds at all) while somehow offering this as a healthy relationship while renewing Ives’ love affair with the widowed Julie is somehow seen as shameful and unnatural. The constant skewered logic behind these conflicted relationships (only Aunt William seems to have a sensible thought in her head) keeps the film’s tone frazzled and often unappetizing.

Joan Bennett receives top billing here (no surprise; producer Walter Wanger was soon to be her husband), and she does everything she can to make this tattered melodrama work saving her best scene for late in the film when she has a showdown with the lovelorn co-ed played by Louise Platt who’s determined to land her science professor and shuffle him off to a cushy job in her father’s electronics plant in London. Henry Fonda seems somewhat dazed thorough much of the movie allowing others to make key decisions for him and seemingly giving up on life just when it should be the most exciting. The film’s best performance comes from one of filmdom’s old reliables: Dame May Whitty as the sensible, worldly-wise Aunt William. Unlike Dorothy Stickney’s nattering fussbudget Mrs. Towner who sees Ives’ future only in terms of what it can do for her, Aunt William is the bedrock of the story, offering common sense and wistful hopefulness instead of selfishness and pettiness. Alan Marshal is just right as the charming wastrel, and Tim Holt as the jealous college boy rejected by Platt’s Brenda likewise hits all the right notes. Also delightful is Henry Brandon in for that quick scene as the unconventional painter who uses real-life food as part of his color spectrum.

The film is presented in its original 1.37:1 theatrical aspect ratio. It doesn’t seem to have been subjected to massive amounts of clean-up as the image is often soft and has a fair amount of unremoved dirt. There are some scratches here and there, too, and a set of reel change markers which haven’t been remedied. Black levels are good, however, and the grayscale overall is more than pleasing.

The Dolby Digital 2.0 sound mix is decoded by Dolby Prologic into the center channel. Dialogue is always discernible and has been mixed skillfully with the music of Heinz Roemheld and the appropriate sound effects. There is some low level hiss that remains throughout, but there are no annoying instances of clicks, thumps, or crackle.

There are no bonus features on this DVD.

Fans of stars Henry Fonda and Joan Bennett (still in her blonde hair period) will be happy to see their 1938 drama I Met My Love Again once more widely available for viewing. It doesn’t rank near the top of either star’s best movies, but it’s a watchable melodrama of its era and deserves to be available for more widespread viewing. 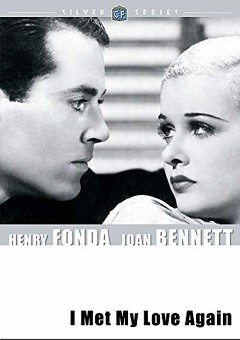