Forum List What's new Dark Style Change width
Log in Register
What's new Search
Menu
Log in
Register
Navigation
Install the app
More options
Dark Style
Close Menu
Posted on February 5, 2016 by Richard Gallagher
You are using an out of date browser. It may not display this or other websites correctly.
You should upgrade or use an alternative browser.
Second Tier Hitchcock is still Hitchcock. 4.5 Stars

Alfred Hitchcock’s I Confess is widely regarded as a second-tier effort by the great director, but it is a serious and substantial film which deserves reconsideration. Fortunately, it is now available in a gorgeous release from the Warner Archive.

He cannot tell them what he heard in confession.

Father Michael Logan (Montgomery Clift) is a parish priest at a Roman Catholic church in Quebec. Late one night he gazes out the window of his room and sees a man enter the church. He goes to investigate and discovers that the man is Otto Keller (O.E. Hasse), the church’s custodian and handyman. Keller is obviously troubled, and he asks Father Logan to hear his confession.

Once inside the confessional, Keller tells Father Logan, “I have killed Mr. Villette.” The priest is clearly taken aback by this. Keller continues, “Villette, the lawyer. I went to his house tonight. I went to steal his money. I wore a cassock to avoid attention. He surprised me. He was going to call the police.” Afterwards Keller tells his wife, Alma (Dolly Haas) what happened. “I didn’t mean to kill him,” he insists. “Alma, I’m not a murderer. It was an accident.” When Alma expresses concern that Father Logan will tell the police, Keller reminds her that the church’s “Seal of Confession” prohibits priests from divulging anything that they learn during the Sacrament of Penance.

The next day Father Logan walks to Villette’s house, where a crowd has gathered outside following the “discovery” of the lawyer’s body by Keller, who was scheduled to do gardening for Villette that morning. Father Logan asks a detective if there is anything that he can do to help, and he is brought into the house to speak with Inspector Larrue (Karl Malden). Father Logan explains that he had an appointment with Villette, and Larrue says that he would like to speak with him about it later. The priest leaves but lingers outside, which catches Larrue’s attention. Then a beautiful woman walks up to Father Logan and they walk away together, piquing Larrue’s curiosity. When Father Logan tells the woman that Villette has been murdered, she responds “We’re free.”

The woman turns out to be Ruth Grandfort (Anne Baxter), the wife of a prominent politician. She is obviously relieved to learn that Villette is dead, but the reason for her relief and the nature of her relationship with Father Logan is, for the time being, left to our speculation. In the meantime, Inspector Larrue questions two schoolgirls who had been out late babysitting and walked past Villette’s house around the time of the murder. They saw a man leave the house and walk away. He was, they are certain, a priest. Circumstantial evidence begins to point to Father Logan. He was with Ruth the evening of the murder, but to protect her reputation he will not disclose his alibi, and his vow of confidentiality precludes him from identifying the real murderer. Meanwhile, the prosecutor assigned to the case is Willy Robertson (Brian Aherne), a close friend of Ruth and her husband.

Montgomery Clift is excellent as Father Logan, and in some scenes his eyes tell us more than his dialogue. Anne Baxter turn in a fine performance as Ruth, whose relationship with Father Logan is much more complex than one might surmise. Karl Malden is perfectly cast as the dogged Inspector Larrue. O.E. Hasse is convincing as Keller, a terrified man who is willing to let an innocent man be hanged for his crime. Equally effective is Dolly Haas as Alma Keller. Many viewers undoubtedly are unfamiliar with her, as she appeared in relatively few American films, but she was well-known film actress in her native Germany before making her way to England in 1936. Brian Aherne is very good as the prosecutor who has to subject her friend, Ruth, to a brutal cross-examination when she testifies. The script, written by George Tabori and William Archibald, is based upon a play by Paul Anthelme. The story was watered down somewhat due to objections by Joseph Breen of the Production Code Administration, who was dubbed “Hollywood’s Censor,” but even with the changes it is an effective screenplay.

The theme of innocent people being wrongfully accused of a crime is something which Alfred Hitchcock liked to visit. I Confess is more of a film noir than a typical Hitchcock thriller and, as we see in The Wrong Man (which Hitchcock made a few years later), the director understands that vindication is not the same as getting off scot-free. Justice may prevail in the end, but along the way there can be considerable collateral damage.

I Confess is delivered in 1080p via the AVC codec. The black and white image is properly framed at 1.37:1 and it is gorgeous. The exteriors were filmed on location in Quebec by Hitchcock’s favorite cinematographer, Robert Burks. Quebec is a city with a very European look, and Burks makes the most of the city’s twisting, cobblestone streets and old-country architecture. The image is very sharp, with strong contrast, inky black levels, and excellent shadow detail. Those who do not like the grainy look of The Wrong Man Blu-ray can rest assured that film grain is far less evident in I Confess.

Readers who would like to see a second opinion are invited to peruse the comments of our resident expert, Robert A. Harris.

The DTS HD-MA 2.0 audio is excellent, featuring crisp dialogue and no age-related noise. The excellent score by renowned composer Dimitri Tiomkin is quite powerful at times and has not even a hint of distortion.

The foreign language soundtracks are in Dolby Digital. There are available in French, Castilian Spanish, Latin Spanish, and Polish. The subtitles are English SDH, French and Spanish.

The extras on this Blu-ray release include the 20-minute featurette “Hitchcock’s Confession: A Look at I Confess.” Among the notable people who comment on the film are Peter Bogdanovich, Robert Osborne, and Richard Schickel, but the real star of the featurette is Jack Larson, best-known for playing Jimmy Olsen in the original Adventures of Superman. Larson, who died recently at the age of 87, has some very deep and insightful things to say about Montgomery Clift.

The film’s theatrical trailer is in very good shape. Also included is newsreel footage of the film’s Canadian premiere in Quebec. Alfred Hitchcock and Anne Baxter were present, but Montgomery Clift was not there.

Even second-tier Hitchcock is better than most films, so do not be dissuaded by those who dismiss I Confess. It has much to offer, and I echo Mr. Harris’ comment that “This new Blu-ray is a must for every serious collection of cinema classics.” It can be found at the Warner Archive website or at Amazon.

Seriously, thanks for catching that. I would have sworn that I typed 20!

Alfred Hitchcock films (overall) despite what may be viewed as varying in quality are very much like Humphrey Bogart, Charles Laughton or Cary Grant movies in that one can pretty much watch and enjoy everything these individual talents do.

At least to "this" Alfred Hitchcock film enthusiast I CONFESS (1953) is another welcome addition to the blu-ray collection.

JeffT. said:
At least to "this" Alfred Hitchcock film enthusiast I, CONFESS (1953) is another welcome addition to the blu-ray collection.
Click to expand...

Boy, it sure is. It's as welcome to me as it was back in the day, just being able to see it at all, when I CONFESS or THE WRONG MAN would fill the seats at any revival house. These might have been viewed as "secondary" Hitchcock even then, of course. But as Hitchcock works, they were as essential as any other. Especially being 1950s Hitchcock works.

Hitch is the director with the most films in my collection.
These two will be added to it of cause.

Yeah, my collection has more Hitch than any other director also (34 out of his total of 53, almost all of them Blu-ray). I have grown to really like JAMAICA INN in spite of Laughton's ridiculous, make-up, and I have been putting off buying I CONFESS the way I did JAMAICA (poor reviews). So, I think I'll pick this up for its apparently lovely transfer, and hope I can grow to really like it as well. Still, if UNDER CAPRICORN ever comes out on Blu, I have no interest in it, despite Ingrid Bergman's participation. I also can't warm up to THE PARADINE CASE. I will pick up STAGE FRIGHT and MR. AND MRS. SMITH if they become available. I am unable to procure decent copies of some of his early silent, although I imported THE LODGER and think it's wonderful. I'm just too old now to be a completest with any director, although I have all of Kubrick's titles (only 13) and those of a few other masters.

By hook, crook or foreign import, I have managed to procure DVDs of every Hitchcock-directed feature film (except for the lost title, THE MOUNTAIN EAGLE (1926), of course) and bought most of my favorites on Blu-ray as they became available. I CONFESS and THE WRONG MAN, by virtue of falling within Hitch's most magnificent decade and good movies to boot, are "must buys" on Blu-ray for me.

I ordered this one tonight. Reviews sound great

I had the chance to watch this Blu-ray tonight, and it does indeed look fantastic. All those tight line structures which waver and flash on the DVD are now rock solid, and it's so beautifully clean and crisp. A first-rate effort!

My copy should arrive on Wednesday. Looking forward to it!
You must log in or register to reply here. 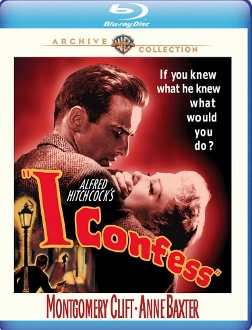