An effective exercise in Southern Gothic mystery and suspense, Robert Aldrich’s Hush…Hush, Sweet Charlotte carries with it the patina of award-winning participants both before and behind the camera, sweeping one up in its deliciously diabolical conundrums that are doled out with beautifully measured ease.

An effective exercise in Southern Gothic mystery and suspense, Robert Aldrich’s Hush…Hush, Sweet Charlotte carries with it the patina of award-winning participants both before and behind the camera, sweeping one up in its deliciously diabolical conundrums that are doled out with beautifully measured ease. Sure, some of the methodology of the time might look phony now, and there are some holes in the narrative which don’t quite survive close scrutiny, but when the production is this splendid and the cast this spectacular, who’s quibbling?

Thirty-seven years after her married lover John Mayhew (Bruce Dern) was butchered to death at her father’s (Victor Buono) plantation party, spinster heiress Charlotte Hollis (Bette Davis) finds herself bedeviled on two fronts: by local authorities who have confiscated her property for bridge construction and have ordered her out of her house in ten days and by uneasy memories of her lover’s violent, unsolved murder beginning to creep back into her consciousness. She has asked her last living relative Miriam Dearing (Olivia de Havilland) to help intercede with the authorities in Baton Rouge, but Miriam knows it’s a pointless exercise to try to stop the construction, so she’s there basically to help Charlotte prepare to leave. But someone seems deliberately intent on raking up the bloody past to unsettle Charlotte. Charlotte suspects Jewel Mayhew (Mary Astor), the widow of the unfaithful John, but there are other people in her life acting suspiciously: Charlotte’s longtime maid Velma (Agnes Moorehead), her personal physician Dr. Drew (Joseph Cotten), an English insurance investigator (Cecil Kellaway) who shows up out of nowhere, and a muckraking tabloid journalist (William Campbell). Someone certainly seems determined to drive Charlotte out of her mind.

The screenplay by Henry Farrell and Lukas Heller (based on a story by Farrell) neatly balances two different mysteries for a great portion of the 2 ¼-hour running time. At the ninety-minute mark, we are finally clued in to the identities of Charlotte’s tormentors, but the mystery of John Mayhew’s murder which is the center around which the entire ruse to debilitate Charlotte revolves isn’t solved until nearly the end of the movie, and for mystery buffs, it’s a dilly of a surprise (little wonder Farrell and Heller won the Edgar Allen Poe Award from the Mystery Writers of America for the best mystery script of 1964). With Psycho having been such a smashing success a mere four years earlier, clearly director Robert Aldrich realized that he’d have to up the ante a bit in the violence department. The Production Code was still in its last years of enforcement, so graphic gore couldn’t quite yet be displayed, but the murder of John Mayhew shown in the dazzlingly effective opening pre-credit sequence that contains wonderful exposition, building a sense of real dread, and then the brutal hack job is a combination of Hitchcock’s subliminal shower murder motif with one or two brief shock cuts of the actual dismemberment. (A later sequence that features a dismembered head prop is very phony and probably shouldn’t have been shown in close-up after the fact.) Still, the creepy ambiance established by creaking doors, slashed clothes, smashed mirrors, crashing thunder, and the like fit the mood of this Gothic narrative beautifully, and other set pieces like Charlotte’s hallucination and the disposal of a body have a nightmarish sheen to them.

The cast is perfection. Bette Davis runs the full range from subdued confusion to outright rage and then sputtering madness played full out with no short cuts and inevitably loaded with pathos. Were it not for the previous success of Whatever Happened to Baby Jane?, Olivia de Havilland should have always been first choice to play the sweetly calculating Miriam, a role that the originally cast Joan Crawford wouldn’t likely have been able to pull off with nearly the subtle brilliance. Agnes Moorehead as the slatternly Velma won the Golden Globe and was Oscar-nominated for her scene-stealing turn as the devoted housekeeper who knows more than is healthy for her, her every scene a riot of a character acting master class. Joseph Cotten is very effective as the Southern charmer Dr. Drew Bayliss, and Cecil Kellaway brings down home sincerity and gentility as Harry. It’s the last round-up for Mary Astor as Jewel Mayhew doing the film as a personal favor for her friend Bette Davis and imbuing her role with Southern sass and candor. Bruce Dern has some touching moments as the victim of a scandalous love triangle, and Victor Buono, one year younger than Dern and yet playing Bette Davis’ father, has a high ol’ time as roaring Sam Hollis who doesn’t suffer fools gladly. Look quick for efficient cameos from Frank Ferguson, George Kennedy, Wesley Addy, and Ellen Corby in small roles.

The transfer is framed at the theatrical aspect ratio of 1.85:1 and is presented in 1080p resolution using the AVC codec. This is one stunning transfer with black levels so rich and shadow detail so expert that it’s a clear showpiece for a finely calibrated system. Sharpness is wonderfully rich with details in facial expressions, hair, and clothes all noticeably expert. The grayscale is quite superbly realized that even when whites are diffused in the hallucination sequence, the blooming is never overpowering or out of control. The movie has been divided into 24 chapters.

The disc offers two soundtracks labeled DTS-HD 2.0 (default) and 1.0, the second of which I thought sounded just a tad richer, though both are mono. One may simply have been a bit louder than the other. At any rate, there are no age-related artifacts like hiss or crackle to worry about, and the dialogue has been mixed beautifully with the most effective, sometimes nerve-jangling score by Frank DeVol (and the title song sung by both Bette Davis and Al Martino at various times in the movie and played instrumentally very often as well) and the effective atmospheric effects.

Audio Commentaries: two commentaries are offered and both are quite worthwhile. The more fact-based and detail-oriented is by critic and film historian Glenn Erickson, always a boon for serious film students and fans. Historians David Del Valle and Steven Peros have a chattier give-and-take with less structure and is more anecdotal.

Hush…Hush, Sweet Joan: The Making of Charlotte (21:47, SD): Robert Aldrich’s daughter Adell hosts this compendium of stories about the making of the movie concentrating on the original shooting with Joan Crawford and the story of her replacement by Olivia de Havilland. Also contributing to the story of the film’s production are historian Marc Vieria and Bette Davis’ son Michael Merrill.

Bruce Dern Remembers (12:50, SD): the actor recalls experiences on and off the set of the movie performing with and meeting Bette Davis, Olivia de Havilland, and Victor Buono.

Six-Page Booklet: contains some movie stills, original poster art on the back cover, and film historian Julie Kirgo’s enthusiastic appreciation of the movie.

Nominated for seven Academy Awards, Hush…Hush, Sweet Charlotte retains much of its most effective mood and menace all these years later and is a spectacular, near-reference quality Blu-ray release. There are only 3,000 copies of this Blu-ray available. Those interested in purchasing it should go to either www.twilighttimemovies.com or www.screenarchives.com to see if product is still in stock. Information about the movie can also be found via Facebook at www.facebook.com/twilighttimemovies.

Excellent movie. Loved it. Fantastic pq. I know this is just saying the obvious, but if you haven't seen it avoid spoilers!

benbess said:
Excellent movie. Loved it. Fantastic pq. I know this is just saying the obvious, but if you haven't seen it avoid spoilers!
Click to expand...

With mysteries, I always bend over backwards not to give away too much, but it's almost impossible not to spill some of the beans.
Reactions: benbess

Matt Hough said:
With mysteries, I always bend over backwards not to give away too much, but it's almost impossible not to spill some of the beans.
Click to expand...

Wasn't meaning to imply anything about your review, which is excellent and well-written as always. I think your review can be read by potential customers with confidence.++
Reactions: Matt Hough

I wonder if Charlotte was kin. I know a few cousins that would make them look sane.
Last edited: Nov 2, 2016

Another film I viewed first in a movie theater during my childhood that scared the crap out of me, particularly,
the greenhouse scene with Bruce Dern.
Reactions: Peter Keller, Matt Hough and benbess

Boy, did it ever. As had Baby Jane before it. I so was completely taken with these films at that tender age, I talked my family's and friends' collective ear off about them. Went to this one repeatedly.

The two Fox-released DVDs have finally gone to new and hopefully happy homes. It is so rewarding to now have both of these films (I'll welcome their less effective imitators as well) in such beautiful form.

Now, of course, it's also doubly rewarding to bring full adult appreciation of all the participants to the party.
Reactions: Peter Keller, Matt Hough and benbess

Always like the placement of the herring, early on with John Megan, aka Dill...
Reactions: Jimbo64 and benbess

Watched this BD yesterday and it is indeed a reference quality disc. Absolutely beautiful and still nightmare inducing. I plan to rewatch with the commentaries next.
Reactions: Peter Keller, benbess and Matt Hough

Matt, when I first read your statement that both audio options were mono, I thought for sure you must be mistaken, but now I have the disc and you are absolutely correct. It is Twilight Time who made the mistake and put the mono track on twice and left off Fox's fake stereo version from the DVD. No real loss there.
You must log in or register to reply here.
Share:
Facebook Twitter Reddit Pinterest Tumblr WhatsApp Email Link 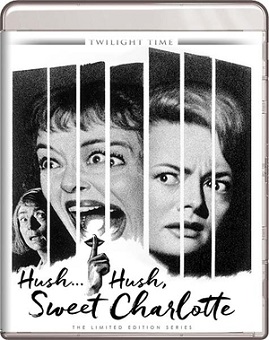