Will (Toby Kebbel) and Breeze (Ryan Kwanten) Rutledge are brothers in Gulfport, Alabama. As kids they experienced trauma during a huge hurricane, and it left an indelible mark on their lives. Will became determined to fight storms and learned meteorology. Breeze turned to booze. During an impending Category 5 (the original title) hurricane, they find themselves entwined in the robbery of the Gulfport facility that destroys US currency. Breeze is kidnapped to work the generators that are out inside, while Will teams up with US Treasury Agent Casey (Maggie Grace). Casey and Will must somehow rescue Breeze and the other hostages and prevent the bad guys, led by insider Connor (Ralph Ineson) from getting away with hundreds of millions of paper money slated for destruction. 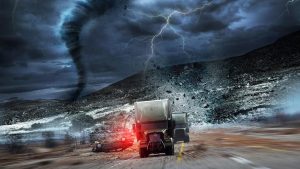 The thing about Hurricane Heist is that it’s a complete mess, but it still manages to be a fun mess.  All of the leads are actors you have never heard of but have seen in bit parts here and there. They don’t have a lot of chemistry together or even have believable motives.  The storm ramps up to something past scientific credibility and yet you are entertained by the  work that went into creating it AV perspective.  And ultimately what could have been a total zero of a film is salvaged by the sheer chutzpah of the sum of its parts crashing together.

So what went wrong?  It’s directed by Rob Cohen, the creator of The Fast and The Furious series.  The guy has a solid track record till now as both a producer and director.  My guess is he had to spend his budget on the effects and not on the name draw of the cast. Add on top of that the need for the storm to be beyond belief and you have a bit of a soup that has to compete with the heist itself.  There’s a lot of ideas thrown in here, including a take on Global Warming.  And there’s a few riffs on what Twister did 30 years ago ramped up beyond all reality.

So what works?  The Dominator storm chase vehicle is badass.  The final chase sequence in the eye of the Hurricane is completely silly and yet it’s fun.  The flooding of the sets is amazing.  The Atmos track is incredible.

Ultimately it’s a fun romp for a few hours if you can check your brain at the door and don’t go looking for actors you are familiar with or will be drawn to for future films.

The Hurricane Heist UHD is light on the highlight side of HDR until you get to the final sequence.  There’s a lot of dark scenes with tons of debris flying around, and those hold up well with good detail and solid blacks.  If I have any nits to pick it is that a few of the very wet scenes are a touch over sharpened making the goose bumps on the soaked actors faces look even more crunchy.  I didn’t see it theatrically so maybe that’s how it was shot, but at home those scenes stood out from others. 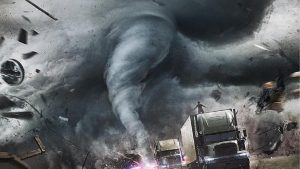 Bottom like is that it looks pretty great, no real complaints here.  The thing that will be the most memorable will be the inner tube of the hurricane’s eye.  They really nailed the look of that.  It’s worth the price of admission to see that just once.

The sound of Hurricane Heist is the real star of the film.  The atmospheric effects of the growing storm ramp up, and are presented in Dolby Atmos to great results.  The winds swirl in all corners and gush to the ceiling in a few memorable scenes.  The rampant gunfire, explosions, crashing waves and crumbling buildings are likewise well imaged. Lorne Balfe’s soundtrack was serviceable especially in the chase sequences.  Good driving drums and synth.

HH is chocked with extras too.  There’s: 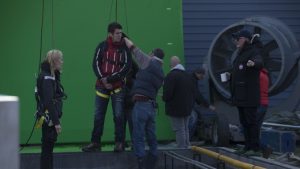 If you are going in on Hurricane Heist you GOTTA watch it in Dolby Atmos.  It’s a terrific showcase for the format.  The film itself isn’t going to be an all time classic but it’s a fun diversion for a few hours, presented as well as possible.

Is there a star rating for just the movie?
Expand signature
facebook.com/whotony
Reactions: Sam Posten

It’s in the review Tony. 2.5/5
Expand signature
It's gonna be a hell of a ride. I'm ready. .
Reactions: Sam Posten

And I think I was ahead of the curve there. The Rotten Tomato’s score is not favorable. I liked it more than a lot of ‘pro’ reviewers. I stick by that. It’s fun if you are willing to check your brain.
Expand signature
Fighting against the Trailer Industrial Complex!
Check out the HTF Podcast!
HTF Rules
Classified Sales Rules
UV Sales New Clarifications

Ok I misread that then. Ibthoughtbthatvwas overall rating. Everything included not just the movie.
Expand signature
facebook.com/whotony
Reactions: Sam Posten

TonyD said:
Ok I misread that then. Ibthoughtbthatvwas overall rating. Everything included not just the movie.
Click to expand...

That's at the end:

Expand signature
The purpose of an education is to replace an empty mind with an open mind.
Reactions: Sam Posten

I’m a little slow but I get there eventually
Expand signature
facebook.com/whotony
Reactions: George_W_K

Normally I wouldn’t link others takes, but... One of the best reviews of all time:
https://uproxx.com/movies/hurricane-heist-review/
Expand signature
Fighting against the Trailer Industrial Complex!
Check out the HTF Podcast!
HTF Rules
Classified Sales Rules
UV Sales New Clarifications

How Did This Get Made podcast with Paul Sheer will be doing this movie upcoming
Expand signature
facebook.com/whotony
Reactions: Sam Posten

Spot on review. A handful of decent action scenes, a few bits of intentional comedy (and even more unintentional), and room-shaking LFE during the storm make for a fun time if you're in a shut-off-your-brain MST3K sort of mood.

The science is total crap and there are a number of issues with continuity: driving through the countryside in the calm eye of the storm, but nothing looks like it's been touched by the first half of the storm passing. There's little if any damage and everything is perfectly dry. They must have run out of money for FX at that point.
Expand signature
The purpose of an education is to replace an empty mind with an open mind.
Reactions: Sam Posten

Makes me want to see it even more.
Expand signature
facebook.com/whotony 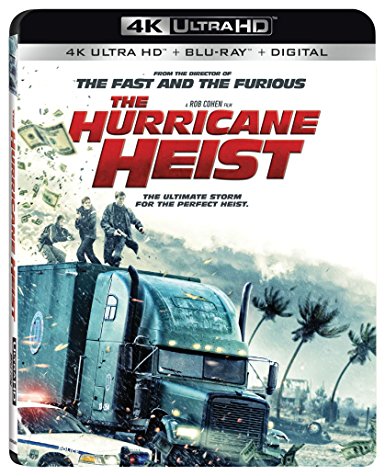