Lionsgate’s most popular film of all-time arrives on 4K UHD with most of its bonus material intact, despite being only a 2-disc set (1 UHD, 1 BD), and an upgraded Dolby Atmos track. Fans will not be disappointed.

To memorialize and oppress the twelve districts of Panem for a failed rebellion, two adolescents, one male and one female between the ages of 12 and 18 are chosen from each district as representatives in an annual televised fight to the death in The Hunger Games. When her younger sister is chosen at her first reaping ceremony, Katniss Everdeen (Jennifer Lawrence) volunteers in her place. Peeta Mellark (Josh Hutcherson)is chosen as the male volunteer, the son of the town baker who has a crush on Katniss. The two are then escorted from District 12 to the Capitol by Effie Trinket (Elizabeth Banks) and former District 12 champion Haymitch Abernathy (Woody Harrelson) on a bullet train, surrounded by food, drink, and luxury. Effie tells the to enjoy it all while it lasts, hinting that their odds may not actually be forever in their favor. Once they arrive in the Capitol, Katniss and Peeta meet the competition, and soon realize that, unlike their district, the wealthier and upper class districts have been training their children for this event all of their lives. But Katniss has a rebellious streak to her, and is a fully trained archer and hunter, having used those skills to help put food on her family’s table. With Haymitch in the Capitol lobbying for sponsors (to supply food and first aid) and Katniss’ hunting skills, she may have a chance of winning.

Suzanne Collins’ novel, The Hunger Games, was a smash best seller in the Young Adult genre, eventually crossing over to become a best seller among adults as well. Naturally, Hollywood was fairly quick to pick it up, and surprisingly ended up at Lionsgate, who at the time was considered a mini-major, specializing in low budget horror, action, and quirky dramas. The film would propel the studio to mainstream status, grossing just under $700 million worldwide and commanding the US box office for four weeks in a row. What made The Hunger Games appealing to mainstream audiences was, perhaps, its dystopian look at our future as a society and how much reality television might eventually control it. One must wonder if Lionsgate’s decision to release the series on the same day as the 2016 Presidential Election was a coincidence or a well-thought out marketing ploy. The film made a star out of Jennifer Lawrence, who carries the film as it is seen mostly through her eyes courtesy of co-writer and director Gary Ross (who was also a big fan of the books). Elizabeth Banks pulls off an almost impossible role as Effie, which could have easily been played as a clown, but Banks manages to give the character a soul (even more so in the three sequels). Woody Harrelson gives Haymitch a believable character arc from drunkard to caring mentor. Stanley Tucci plays master of ceremonies Caesar Flickerman with such over the top flair that you can’t help but have a love/hate relationship with him. And Donald Sutherland is quietly and coldly menacing as the oppressive and power hungry President Snow.

Photographed in 35mm but completed as a 2K digital intermediate, The Hunger Games arrives upconverted for its 4K UHD Blu-ray debut. The result is subtle improvements in fine detail and contrast, and more natural-looking colors. This is even more apparent during many of the night time sequences in the woods, allowing for deeper blacks while still retaining shadow details. The greenery of the forest has more gradations, providing more perceived detail in the leaves and grasses. It is not a day and night difference when compared to the 1080p Blu-ray, but it is noticeable if looking for it.

The real reason fans will want to upgrade to 4K UHD is the audio, and Lionsgate has remixed The Hunger Games in Dolby Atmos (with Dolby TrueHD 7.1 core), which is a dramatic improvement over what was a near reference quality DTS-HD Master Audio 7.1 track on the 1080p Blu-ray. Surrounds are more active and discrete, LFE is much stronger (but not overpowering), and the heights add an additional level of immersion with atmospheric effects such as leaves rustling and mocking jays singing. And this is all from a 5.1 configuration with added heights and Pro-Logic IIz enabled.

Fans will be happy that most of the special features from the original 2-disc Blu-ray release are included on the UHD disc (there are no special. features on the included Blu-ray edition). Missing are the featurettes Controlling the Games, A Conversation with Gary Ross and Elvis Mitchell, Preparing for the Games: A Director’s Process, Propaganda Film, and the Marketing Archive.

The World is Watching: Making The Hunger Games (1080p; 122:00): An extremely comprehensive feature-length look at the making of the film, which can be viewed in its entirety using the Play All option, or as eight individual segments, including Countdown, Casting, Design, Arena Ready, On Location in Panem, Effects, Post Production, and May the Odds Be Forever in Your Favor.

Letters From the Rose Garden (1080p; 9:08): Actor Donald Sutherland wrote a three page letter to Gary Ross after accepting the role of President Snow on what power and obsession is thru the eyes of Snow. The two men discuss the letter and how it inspired Gary Ross to write some additional scenes in the Rose Garden.

Unfortunately, some of the special features from the original 2-disc Blu-ray release are missing, but at least Lionsgate was able to include the bulk of them on the 4K UHD disc rather than ditch them entirely (which some studios have been guilty of). What makes this disc a true winner is the new Dolby Atmos mix. 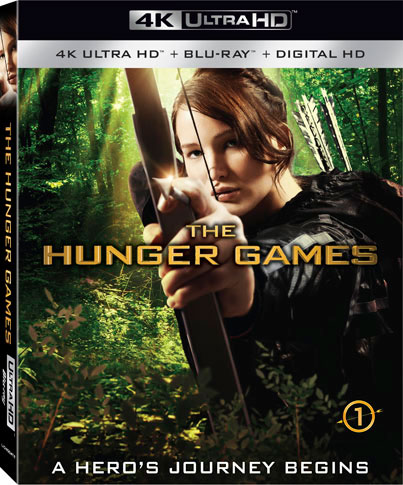