Forum List What's new Dark Style Change width
Log in Register
What's new Search
Menu
Log in
Register
Navigation
Install the app
More options
Dark Style
Close Menu
Posted on December 8, 2016 by Todd Erwin
You are using an out of date browser. It may not display this or other websites correctly.
You should upgrade or use an alternative browser.
Suffers from middle film syndrome 4.5 Stars

The decision by Lionsgate to split the third book in The Hunger Games series, Mockingjay, into two movies (a growing trend in Hollywood) may have seemed like a good idea at the time, but Part 1 often feels padded, moving at a much slower pace then either of its predecessors.

After being airlifted from the 75th Hunger Games, Katniss Everdeen (Jennifer Lawrence) awakens deep within District 13 (not to be confused with MST3K’s Deep 13), an underground bunker facility on the outskirts of Panem. The district’s President, Alma Coin (Julianne Moore), and Head Games Maker turned rebel Plutarch Heavensbee (Philip Seymour Hoffman) inform Katniss that her destruction of the dome at the end of the games sparked riots against the Capitol, and ask her to be the symbol and spokesperson for the rebellion, The Mockingjay. Seeing how Peeta (Josh Hutcherson) has been brainwashed by the Capitol, Katniss agrees under two conditions: that District 13 rescue the captured victors (including Peeta) from the Capitol and pardon them for their participation in the games.

In the meantime, Katniss tours bombed out areas of Panem, and is followed by a film crew to record propaganda videos in support of District 13. The videos are broadcast to all of Panem over high jacked airwaves by District 13, infuriating President Snow (Donald Sutherland), who eventually launches an aerial assault on the rebels. Thanks to an early warning from Peeta during a live televised interview, the rebels are able to find cover and survive unscathed, allowing them to launch a counterattack to liberate the captured victors from the Capitol. But Peeta is not the same person as he was before.

Splitting the final book in the series, Mockingjay, into two movies wasn’t necessarily a bad idea, but it did place these last two films at a disadvantage, and that is pacing and the feeling of being padded for time. Plutarch and Coin have discussions that, according to the included documentary, were not in the book, but “very likely happened in the margins.” The Hunger Games: Mockingjay Part 1 includes many sequences like these that could have been edited down or removed completely, yet it has the shortest running time of all four films (just over two hours). There is also a lot less action in this film and a lot more talking, again making the film feel longer than it actually is. As Katniss, Jennifer Lawrence has even more opportunities in this film to show her dramatic range, and proves that she had this role nailed down from the first frame of the first movie. Along with the return of familiar characters played by Josh Hucherson, Philip Seymour Hoffman, Donald Sutherland, Woody Harrelson (Haymitch), Liam Hemsworth (Gale), and Elizabeth Banks (Effie), they are joined by familiar actors playing new characters, including Julianne Moore as Coin, Natalie Dormer (Game of Thrones) as Cressida, and Elden Henson (Marvel’s Daredevil) as mute Pollux.

The Hunger Games: Mockingjay Part 1 was shot digitally and captured on the Arri Alexa XT Plus at 2.8K, and completed as a 4K digital intermediate (as was Part 2). Since the first two films were photographed on 35mm stock, the last two films have a very different look to them. This is even more noticeable in this 4K UHD release. Fine detail and contrast are vastly improved upon when compared to the 1080p Blu-ray, especially in darker sequences such as the walls in District 13, where you can still see the imperfections in the bricks. Colors are more natural and have wider gradations, particularly in President Snow’s wardrobe and roses. This is definitely reference and demo quality material.

This UHD release of The Hunger Games: Mockingjay Part 1 contains the same Dolby Atmos track found on its Blu-ray counterpart, which is backwards compatible to Dolby TrueHD 7.1. This is another reference and demo worthy mix, even if the film is more dialogue driven. Speaking of dialogue, it is clear and understandable throughout, directed mostly to the center channel with panning across the soundstage where appropriate. Surround and LFE activity is limited, mostly to atmospheric effects and are fully engaged during the few action sequences. For some unknown reason, Lionsgate has included the DTS-X Headphone logo on the back cover, even though there is no DTS-X track on this disc whatsoever.

Much like the two previous Hunger Games films, the special features are accessible from the UHD disc as well as the Blu-ray.

Audio Commentary with Director Francis Lawrence and Producer Nina Jacobson: Similar to their track on Catching Fire, the two participants talk about the making of the film, but there are several moments of complete silence.

The Mockingjay Lives: The Making of Mocklingjay Part 1 (1080p; 134:19): Viewable as a whole or in seven parts, this is another in-depth look at the making of the movie.

Straight from the Heart: A Tribute to Philip Seymour Hoffman (1080p; 11:30): Members of the cast and crew discuss working with the actor who passed away near the end of production.

Songs of Rebellion: Lorde on Creating the Soundtrack (1080p; 8:10): The artist discusses her involvement in the score of the film.

Almost suffering from middle film syndrome, The Hunger Games: Mockingjay Part 1 still manages to hold its audience with a compelling enough story arc to prepare us for the finale. Video is a definite improvement in UHD, and the audio is nothing to sneeze at, either. Those looking to upgrade will be happy to know that all of the bonus features are included here. 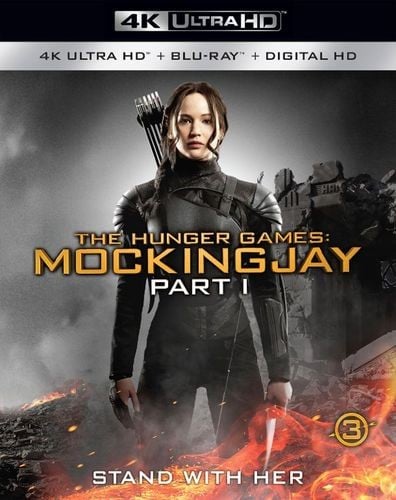