Forum List What's new Dark Style Change width
Log in Register
What's new Search
Menu
Log in
Register
Navigation
Install the app
More options
Dark Style
Close Menu
Posted on August 30, 2018 by Sam Posten
You are using an out of date browser. It may not display this or other websites correctly.
You should upgrade or use an alternative browser.

Nature does not give a damn about our plans! Recommended 4.5 Stars

In May of 1845 an expedition of English sailors left just north of London towards the Arctic Circle with the goal of finding a “Northwest Passage”. Such a passage, if it existed, was thought to unlock economic riches through faster trading with the far side of the world. The two ships, Erebus and The Terror, were last seen in July of that year. 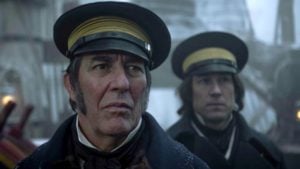 AMC’s The Terror adapts Dan Simmons’ book of the same name. Simmons exhaustively researched all known facts about what happened to the doomed expedition (both ships have been discovered, first the Erebus in 2014 and The Terror in 2016), and he built a compelling dramatization of what might have happened. He then mixed in a liberal sprinkling of fantastic components based upon the sacred beliefs of the Inuit people (Called by the term Esquimaux/Eskimo in the show, tho that term is considered a pejorative today).

The 129 men of the expedition consisted of a trio of captains that include Sir John Franklin (Ciaran Hinds) and Francis Crozier (Jared Harris). Over the 11 episodes that cover the 3 years that the men manage to persist, we witness their trials and attrition. Based upon the historical records of crew members found in the 80s, we know that both ships were icelocked in September and they did not thaw for the next two years. While the expedition was well provisioned to be at sea for up to 5 years, they had to battle scurvy, mutiny, light deprivation, and extreme cold. It is also thought that the canned goods that they took or the water system on board may have introduced lead poisoning as well, which can cause hallucinations and eventually madness. 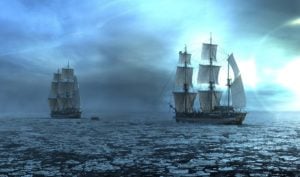 The Terror delves into the interpersonal relationships of the officers, deckhands, doctors, morticians on the expedition, and introduces an Inuit character, Lady Silence, who has knowledge of an additional terror befalling the expedition, an enormous spirit that lives in the Arctic and hunts the crew. Besides Lady Silence the only other female cast members are seen in flashbacks to Crozier and Franklin’s wife and niece. First as the drama between the four of them is introduced by Crozier’s rejection as a possible suitor, and later as the two try to convince the Royal Navy to send a search party.

In an interesting twist, Season One of the Terror is the only one that is based on Simmons’ book and the Franklin expedition. Season two will have an all new cast and tell an entirely different story, set between California and the Japanese internment camps in Pacific islands.
https://www.amc.com/shows/the-terror/talk/2018/06/the-terror-renewed-for-season-2 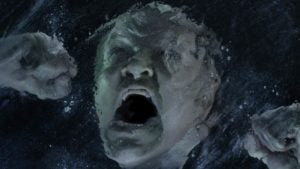 As a fan of archaeology I was already somewhat familiar with the recent discoveries of the Franklin expedition ships, but not with the historical fiction about them found in Simmons’ book.  I had DVRed the first episodes of the series but never gotten around to really focusing on them.  I’m glad I waited, because the Bluray quality of the sound and picture both are leagues ahead of the compressed signal FIOS incomprehensibly puts out for AMC.  Both qualities are simply stunning, with production value that is top rate and acting to match.  Hinds and Harris are well known and highly respected of course, but new faces from the ensemble really stood out, especially Paul Ready’s Goodsir and Adam Nagaitis’ Hickey.  Ian Hart’s Blankey comes across as just the kind of actual badass you always want having your back. 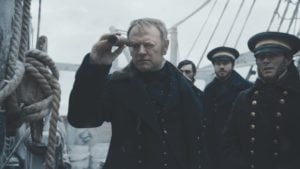 Digging in, I binged the whole season in 2 days.  I found the early episodes really held my attention as the expedition launched and we learn the personalities on board.  Franklin’s hubris, Crozier’s ambition (and fondness for drink).  Members of each strata in the crew also get their time to shine as we learn their duties, gossip, admiration, honor, and lack of honor.  I wasn’t as impressed with the creature itself that stalks them, but really dug the action sequences where it attacked.  The later episodes with the long walk out and the descent into desperation flagged a bit for me, and I was a bit disappointed that no real details about Inuit life ever materialized. 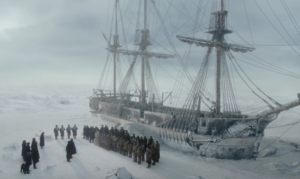 I’ve already reached out to friends who are naval history buffs and they had tons of good things to say about the show.  Ultimately I really enjoyed it as well, enough so to buy Simmons’ book and a second about the known historical aspects.  While it all ends up as a complete tragedy, The Terror showcases interesting people dealing with crushing events and just trying to survive.  That makes damn good TV and I can recommend the show to anyone who loves solid drama as much as I do, and it helps that it looks and sounds great too. 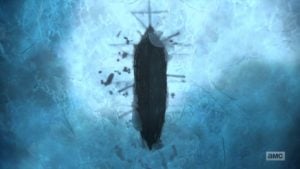 As noted above the image quality of this Bluray far exceeded that of my fiber based cable provider.  Dark sequences on the water and ice are only bested by those below decks.  An early sequence under the ice really grabbed my attention, as the other-worldly vista competed for the dark depths of the abyss.  The costumes and stage sets are both historically accurate and supremely detailed.  The show is not afraid of tight closeups of the cast either, with abundant detail down to fine hairs and pores accompanying the believable performances. 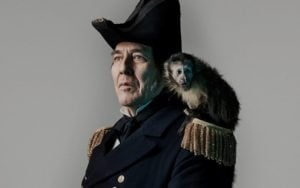 If I have one complaint it’s the CGI of the terror creature itself.  I get what they were going for, but keeping it in shadow for most of the series was more effective than having it on full display near the end.

This is easily one of the top sounding TV shows I’ve heard, at least during the more adventurous escapades.   The beauty and treachery of the ice is both heard and felt, it really becomes a character of its own during the episodes where the crew is locked in.  Storms rage around during early episodes as well, and the action sequences against the spirit have guns and cannons firing all around.  Later episodes have fewer instances of big action, but there’s two gun battles in the final episode where the surround shines through again. 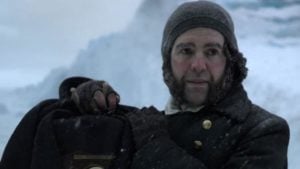 A look at the characters

A look at the series

Ridley Scott on “The Terror”

They are all worthy of your time and give a look at the series from a few different perspectives.  All 3 end just when you’d like them to dig in a bit more.

Overall I really enjoyed burning through this series in short order.  The cast was amazing, the story was intriguing enough to send me googling for facts about the real expedition, and the A/V qualities were better than 90% of broadcast TV.  What more could you ask for?  Recommended! 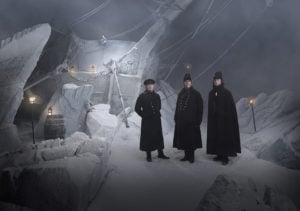 Do you want to know more?  I found these articles about the real expedition fascinating:

I liked the show enough that I went and bought the Kindle version of the book from Amazon:

The Terror: A Novel

$10.99 (as of October 2, 2022 19:50 GMT -07:00 – More infoProduct prices and availability are accurate as of the date/time indicated and are subject to change. Any price and availability information displayed on [relevant Amazon Site(s), as applicable] at the time of purchase will apply to the purchase of this product.)

And I’m considering buying this one, about the expedition:

17% Off $28.00 $22.99 (as of October 2, 2022 19:48 GMT -07:00 – More infoProduct prices and availability are accurate as of the date/time indicated and are subject to change. Any price and availability information displayed on [relevant Amazon Site(s), as applicable] at the time of purchase will apply to the purchase of this product.)

Orders are despatched from our UK warehouse next working day.

Paramount Presents: War of the Worlds (1953) and When Worlds Collide Limited Edition

Thanks for the great review, Sam!

dpippel said:
Thanks for the great review, Sam!
Click to expand...

Thanks, have you seen the show yet?

Moved this from regular Blu forum to TV on Blu forum. Those responsible have been sacked.

Sam Posten said:
Thanks, have you seen the show yet?
Click to expand...

I have not, but since I've heard so many good things about it I picked up the Blu. Looking forward to checking it out!

Great show, no one will be disappointed.

I was disappointed. 10 hours were not required to tell this story.

Back on August 12 for S2.
https://www.reddit.com/r/television...seasons_of_amcs_the_terror_and_lodge_49_will/

I recently watched this season and loved every minute of it. Terrifically well made with some standout performances. Very much looking forward to where they are going with this anthology series in season two. Great review, Sam!

So ready for this!
https://arstechnica.com/gaming/2019...-in-first-trailer-for-amcs-the-terror-infamy/