Forum List What's new Dark Style Change width
Log in Register
What's new Search
Menu
Log in
Register
Navigation
Install the app
More options
Dark Style
Close Menu
Posted on October 2, 2018 by Timothy Bodzioney
You are using an out of date browser. It may not display this or other websites correctly.
You should upgrade or use an alternative browser.
Recommended 4 Stars

Arrow Films has released Peter Fonda’s 1971 revisionist Western, The Hired Hand on Blu Ray.  It’s a simple story of a drifter who returns home after seven years to his abandoned wife and young daughter.  Directing from a script by Alan Sharp and working with great cinematographer Vilmos Zsigmond and editor Frank Mazzola, Fonda created a uniquely personal and ambitious film that while not totally successful, could be called a visual tone poem.

There isn’t a lot of plot in The Hired Hand.  It opens as three drifters, Harry Collings (Peter Fonda), Arch Harris (Warren Oates), and Dan Griffen (Robert Pratt) stop for a night in a lawless town at the end of nowhere, contemplating going west to California – the quest for a promised land.  The standard Western dream.  There is an unexpected murder and then an act of violence in retaliation.  Instead of California, the two survivors go to Harry’s ‘home’ and to Hannah (Verna Bloom), the wife Harry left years ago.  Harry must choose between drifting and responsibility.  The film ends with another scene of violence and death.

The late 1960’s through the mid 1970’s is considered a second ‘golden’ era of American filmmaking.  There is unquestionably a cultural shift in the 1960’s.  It is generally believed that the failure of big budget studio films such as Doctor Doolittle and Star! (poor Julie Andrews was in three such back-to-back flops) and the success of youth-oriented product from independents such as AIP along with Bonnie and Clyde and the above-mentioned Easy Rider is the reason the studios turned the keys over to a younger generation of more culturally attuned filmmakers.

I think this is a bit of oversimplification as A Hard Days Night was released the same month in 1964 as Mary Poppins.  The Sound of Music and My Fair Lady were huge successes.  John Wayne may have been at the peak of his popularity in the 1960’s.  In 1970 Myra Breckinridge and Beyond the Valley of the Dolls were financial disasters while the old-fashioned Airport was the second biggest box office draw.  Then, there is also the popularity of the Bond films of the 1960’s and I can’t think of any franchise more ‘establishment’ than the Bonds.  In retrospect it hard for me to believe that the Bonds with their cold war and sexual attitudes were as successful with young audiences as they seem to be made for middle-aged men.

According to Peter Fonda in all three of the disc’s supplements that include his participation, that after the enormous success of Easy Rider he was anxious to escape being typecast as Captain America and turned to the Western genre in hopes of doing a 180 to achieve this.  The Hired Hand was the first of three movies that Fonda would direct in his brief and unsuccessful directing career.

The Hired Hand is the second feature script produced from talented Scottish screenwriter Alan Sharp whose earlier work had been teleplays for the BBC.  Sharp, on a roll in the early to mid 1970s whose other scripts in that era include Richard Fleischer’s (replacing John Huston) The Last Run, Robert Aldrich’s Ulzana’s Raid, and Arthur Penn’s Night Moves.  That’s a really impressive line-up and all within a five-year period!  Later projects include Billy Two Hats, Damnation Alley, The Year of Living Dangerously, The Osterman Weekend, and Rob Roy.  Sharp was a versatile writer capable of working effectively in different genres.

The Hired Hand while definitely recommended is a curious mix that doesn’t add up.  Warren Oates and Verna Bloom give Oscar worthy performances. Oates is always wonderful, usually underappreciated and easily one of the best character actors of his generation.  Zsigmond’s photography contains some of the most beautiful images I have ever seen in a movie.  I first saw it at my junior high school.  The projection was so dark that I didn’t remember much of the film other than the scene of Peter Fonda shooting Severn Darden’s feet.  Seeing this disc was like seeing the movie for the first time.  The art direction by Lawrence G. Paull is striking and is in itself like a character in the film.  The score by Bruce Langhorne is not a conventional score of the era (he describes it as an accompaniment), but it is very effective and ahead of its time.  The montages by Mazzola are impressive and at times beautiful, but I think this is one of the places the film takes a wrong turn.

Fonda states that he told Mazzola, ‘no montages’ at the beginning of the shoot.  The film was not designed for them.  Zsigmond was surprised when he saw them.  Fonda first reaction to the montages was anger, but he obviously warmed up to them and let Mazzola run.  I think this was a mistake as the montages do create a tone, but at the expense of both plot and character as well as pace.  The disc includes several deleted scenes, most of them very good including a wonderful turn by Larry Hagman as a sheriff, and a couple crucial scenes that were deleted at Fonda’s insistence to maintain the tone.  I think the inclusion of those scenes and the deletion of most of the montages would have made it a stronger movie.  I bet the beautifully shot burial scene would be much more powerful had it been conventionally edited.

I think the biggest problem is that Fonda took a good script with well written characters and dialogue and turned it into a vanity production.  All of the supplemental material was produced at the time of the film’s photochemical restoration in 2001.  Alan Sharp was still alive and working but is curiously absent from these pieces.  All of the film’s other living major collaborators are interviewed.  Fonda states that he read the script while in London promoting Easy Rider.  He says he loved the script, but he never comments about his working relationship with Sharp or Sharp’s opinion of the final product.  Was Sharp happy with the changes?

Fonda tosses out of lot of stuff about Greek tragedy and grand themes.  He claims he chose the Western because of its mythic dimensions.  Sure, but the only two westerns he mentions in close to five hours of talking is two with his father: The Oxbow Incident and My Darling Clementine (which he incorrectly calls an art film – I don’t think Darryl Zanuck was in the business of producing art films).  He admits being inspired by the two films.  Some of the themes of Sharp’s script deal with male/female male/male relationships, the urge to wander to a better place and ultimately, the conflict of duty and desire – classic western film themes.  These themes are obscured by Fonda’s editorial choices and it seems to me the completed film is about a man/boy searching for a father figure.  Fonda describes the images of the older Arch cradling a dying Harry as a pietà.  In the three supplemental pieces with Fonda, he pretty much says the same things over and over (in recordings separated by 30 years) about the film and is not particularly illuminating.  His most interesting comments are always about his father, Henry Fonda, which have nothing to do with The Hired Hand.  Was The Hired Hand Peter Fonda’s attempt to connect with his own father?

The Hired Hand was not a commercial or critical success.  It is ironic that a studio like Universal would greenlight projects like this and Dennis Hopper’s The Last Movie (soon to be released on Blu Ray) and have no idea how to sell them.  The marketing materials included (trailers, tv and radio spots) are dreadful and demonstrate Universal’s cluelessness.

The Hired Hand looks very good.  The colors are magnificent, particularly in some of the montages – they are so striking that at times it looks like abstract paintings.  It’s presented in its original aspect ratio, 1.85:1.  It was restored by NBC Universal in 2001 with the participation of Fonda.  It is considered a director’s cut and Kim Morgan in his essay states that it is shorter than its original running time.  Universal pulled the film out of distribution quickly in 1971 and sold it to television, for which it was recut.  Ironically, this studio cut was seen by far more people on NBC than in theaters at the time.  It’s too bad all three cuts aren’t included.

The mono sound is also very good.  The music sounds remarkably directional at times for a mono mix.

Arrow has put together a fascinating collection of extras for this movie including:

A feature length audio commentary with Fonda done in 2003.

A feature length documentary, The Return of the Hired Hand featuring Fonda, Verna Bloom, Vilmos Zsigmond, Bruce Langhorne, and Lawrence G. Paull.  Fonda of course is the star and gets the most screen time.  This was done around the same time as the commentary and the two are similar.

The Odd Man, a 1978 documentary about Scottish screenwriters including Alan Sharp.

An audio recording of Peter Fonda and Warren Oates at London’s National Film Theatre in 1971 promoting The Hired Hand.  This is particularly interesting because I’ve never heard Oates interviewed and he is relaxed, funny, and mature.  Especially compared to 31-year-old Fonda who comes across as both pompous and obnoxious.  I can only imagine Universal’s reaction to this recording if anyone was paying attention.  It’s easy to forgive Fonda, given his age and at that moment, power.  It’s interesting to compare how he comes off in this interview and how he comes off in the pieces from 2003 where he sounds much mellower and far less obnoxious.

It took me a long time to appreciate post-studio Westerns.  There was a time when I dismissed Peckinpah and Leone.  Now I look at those films and films like The Hired Hand as almost evolutionary and inescapable.  Not that I think the latest is the highest form, but I see how historically revisionist Westerns are important, similar to the changes in horror films of the time and do reflect the eras from which they were produced and enjoy them on those terms.  As I wrote above, The Hired Hand is personal and ambitious.  It also is serious, one might say humorless and sincere and definitely worthwhile for lovers of Westerns.

The Hired Hand was not a commercial or critical success. It is ironic that a studio like Universal would greenlight projects like this and Dennis Hopper’s The Last Movie (soon to be released on Blu Ray) and have no idea how to sell them. The marketing materials included (trailers, tv and radio spots) are dreadful and demonstrate Universal’s cluelessness.
Click to expand...

I remember Clint Eastwood being interviewed about his move from Universal to Warner Brothers around this same time period, and citing Universal's poorly managed marketing dept in the late 1970s. I think that is also why Steven Spielberg ended up producing most of his Steven Spielberg Presents movies over at Warner in the 1980s, too.

Excellent review. If Peter Fonda weren't so insufferable, Stinky might consider watching this one.
You must log in or register to reply here. 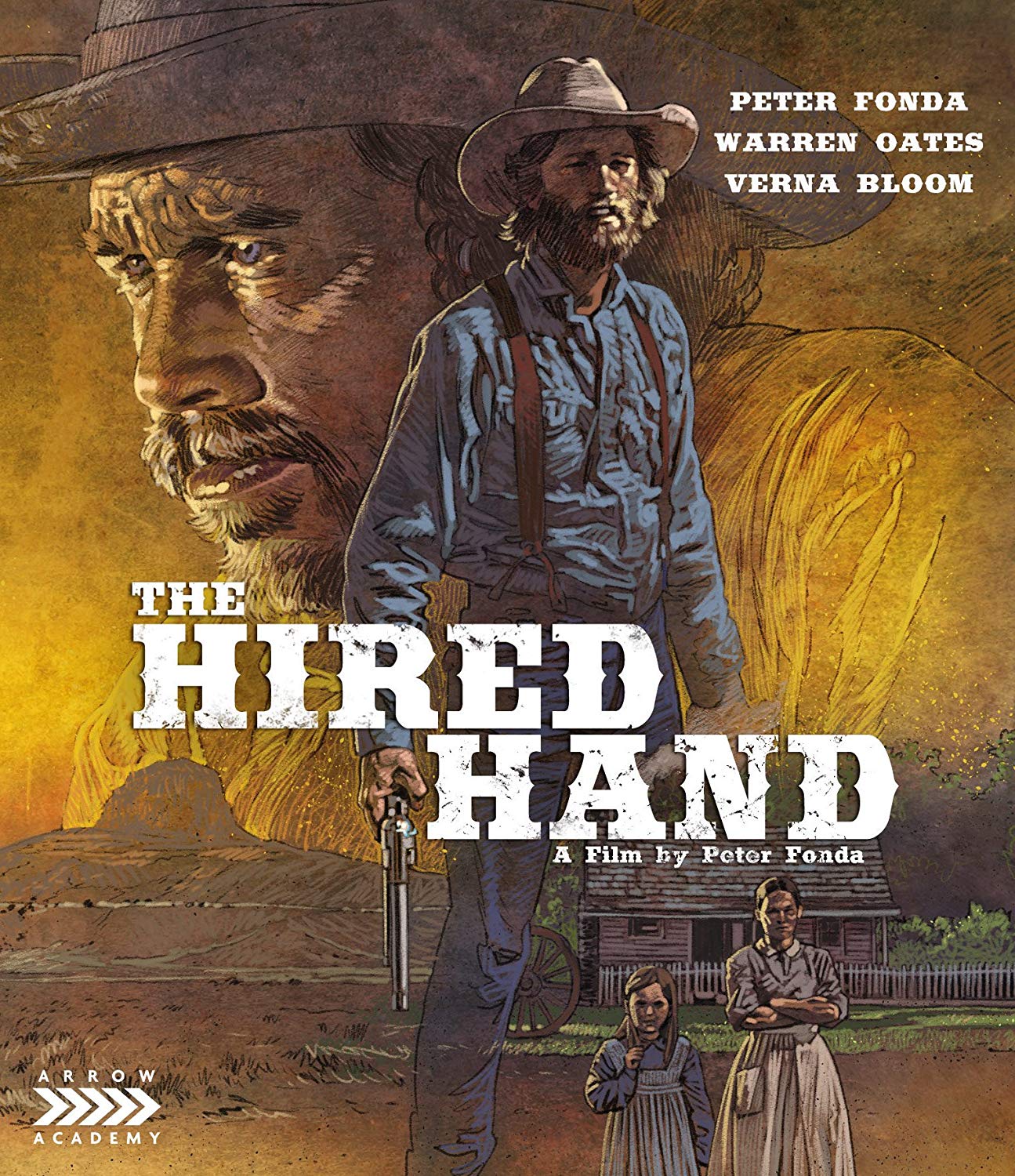