Forum List What's new Dark Style Change width
Log in Register
What's new Search
Menu
Log in
Register
Navigation
Install the app
More options
Dark Style
Close Menu
Posted on May 20, 2019 by Todd Erwin
You are using an out of date browser. It may not display this or other websites correctly.
You should upgrade or use an alternative browser.
Bittersweet but Satisfying Conclusion 4.5 Stars

How To Train Your Dragon: The Hidden World brings an epic story that spanned three movies and two television series to a satisfying but bittersweet conclusion.

With Berk’s leader Stoic gone and dragon hunter/war monger Drago defeated, Hiccup (Jay Baruchel) struggles to fill his father’s shoes, turning Burk into a dragon/Viking utopia, with dragons and Berkians living side by side. Hiccup has been rescuing trapped dragons with help from his team of dragon-riders – girlfriend Astrid (America Ferrera), Snotlout (Jonah Hill), Fishlegs (Christopher Mintz-Plasse), and the twins Ruffnut (Kristen Wiig) and Tuffnut (Justin Rupple) – bringing the rescued creatures back to their homeland. The only problem is that Berk is now over-run with dragons, so much so that the dragons are accidentally destroying their homes. Unbeknownst to Hiccup, the dragon hunters have been working for a dragon exterminator, Grimmel (F. Murray Abraham), who is set on destroying each and every dragon from the face of the earth in order to save the human race. Grimmel uses a female light fury dragon as bait, hoping to capture Hiccup’s pet dragon Toothless, who is the reigning king of dragons, allowing him to capture all of Berk’s creatures. Hiccup decides to withdraw from Berk and find what his father referred to as “The Hidden World,” a place at the edge of the world where dragons live in sanctuary away from humans, with Grimmel on his tail.

I have been a big fan of DreamWorks Animation’s How to Train Your Dragon franchise ever since the first film hit movie screens nine years ago, spawning a two-season series on Cartoon Network (Dragons: Riders/Defenders of Berk), a five season series on Netflix (Dragons: Race to the Edge) and two movie sequels. How to Train Your Dragon: The Hidden World brings the franchise to an emotionally satisfying ending. It’s a tale of letting go, finding teamwork, and growing up, especially Hiccup and Toothless, who have been the best of friends though thick and thin. It is a terrifically epic story told on a broad canvas, with director Dean DeBlois (who has helmed all three movies) and his team of artists with assistance from cinematographer Roger Deakins (Blade Runner 2049) as visual consultant creating one of the most beautifully animated series of films. The voice cast is excellent, with the series regulars knowing their characters like the back of their hand, and new villain Grimmel, as voiced by F. Murray Abraham, is much more dimensional and menacing psychologically than through any brute force, and in a way his solution does make sense, at least if you look at the way dragons were essentially destroying Berk. The love story between Toothless and the Light Fury is at times humorous and heartwarming (the mating dance will likely have you in stitches), and the epilogue with a grown up Hiccup, Astrid, and their children will bring a tear to your eye.

How to Train Your Dragon: The Hidden World is a sight to behold on Blu-ray. Colors are bold and vivid through much of the film, and then get turned up to 11 when Hiccup and Astrid ride into to The Hidden World with its phosphorescent lighting. Detail is excellent, revealing individual scales in the dragons especially in close-ups, hairs in the furs worn by the humans, and even the peach-fuzz beard stubble on Hiccup at the 23:41 mark. Contrast is also excellent, allowing for deep blacks with strong shadow detail, and even rays of light and shading during more brightly “lit” scenes.

The Dolby Atmos track on How to Train Your Dragon: The Hidden World is close to demo-worthy, not in its flashiness, but in its more subtle use of spatial audio. The opening rescue sequence is a great example, as sounds move fluidly from one end of the listening area to another and discrete sounds emanate precisely from areas where there are no discrete speakers. LFE is strong, giving dragon bellows and explosions some extra weight. Dialogue is clear and understandable throughout, never getting lost in the mix.

DreamWorks Shorts (1080p): Two animated shorts, Bilby (8:01) is set in the outback of Australia is the better of the two, and Bird Karma (4:48) is told in a more traditional hand-drawn style of animation. Neither were shown theatrically with How to Train Your Dragon: The Hidden World.

Alternate Opening (1080p; 4:15): Although the packaging may lead one to believe this alternate opening was completed, it appears here in mostly storyboard form and includes an optional introduction by writed/director Dean DeBlois.

How to Voice Your Viking (1080p; 1:33): A brief glimpse at actors in the recording studio reading their lines.

Creating an Epic Dragon Tale (1080p; 4:25): A look at expanding the scope in each movie installment.

The Dragon Sheep Chronicles (1080p; 2:35): Hiccup and Margaret the Sheep narrate a look at how sheep survive in dragon-infested Berk.

Growing Up With Dragons (1080p; 3:34): A look at Hiccup’s character development through all three films.

The Evolving Character Design of Dragons (1080p; 3:18): A look at the design evolution of some of the major characters through the trilogy.

Audio Commentary with Writer/Director Dean DeBlois, Producer Bradford Lewis and Head of Character Animation Simon Otto: The three discuss the many challenges they faced while making the film.

DVD Copy: The movie in 480p and Dolby Digital 5.1 audio and all of the Special Features listed above.

Train Your Own Dragon Facebook Messenger Game: An insert contains instructions on how to download the game to your smart device.

How to Train Your Dragon: The Hidden World is a satisfying and emotional conclusion to the franchise, and Universal’s presentation on Blu-ray is excellent.

Thanks @Todd Erwin - my copy is in the mail and I'm glad to know this is such a high-quality release.

I can't wait to watch this sight-unseen. I'm surprised at the consistent quality of these films. I never saw the first two on the big screen, but bought them on BD based on positive feedback and I have been nothing but impressed with them. My copy is in the mail.

Best Buy is offering a $5 My Best Buy Rewards certificate when you purchase this movie on Blu-ray or UHD, which essentially brings the Blu-ray down to $19.99 and the UHD to $24.99.
You must log in or register to reply here. 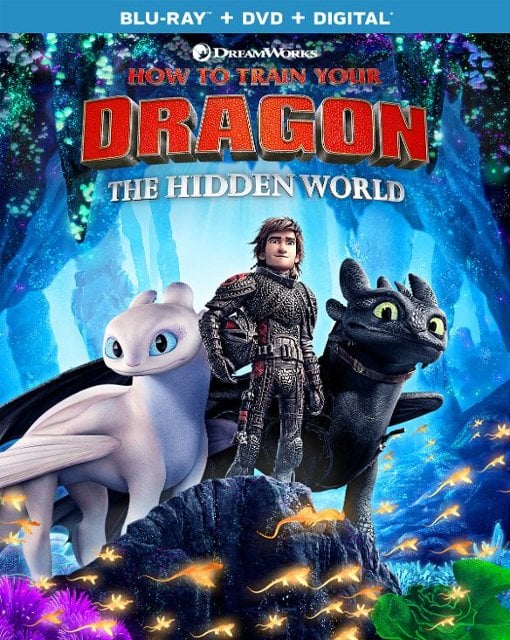