Forum List What's new Dark Style Change width
Log in Register
What's new Search
Menu
Log in
Register
Navigation
Install the app
More options
Dark Style
Close Menu
Posted on June 8, 2018 by Josh Steinberg
You are using an out of date browser. It may not display this or other websites correctly.
You should upgrade or use an alternative browser.
Jackie Gleason leads a stellar cast in a colossal misfire. 2.5 Stars

In this notorious flop, Jackie Gleason leads a talented cast (including Maureen O’Hara and Shelley Winters) in a story about love and faith, and the cumulative effects of both on a family where one parent is devoutly religious and the other is a staunch atheist. Though the concept had great potential, a poorly structured script and uninspired direction leave the cast with no place to go.

How Do I Love Thee? is an unusual film that takes an unusual concept and manages to fail on nearly every level. No film with a cast that includes Jackie Gleason, Maureen O’Hara and Shelley Winters should be considered irredeemable, but nothing here works as it should. From a flashback structure that raises more confusion than intrigue, to humor that misfires badly, the film is frequently a mess that lacks the courage of its convictions.

The film begins in the present day, when Stanley Waltz (Gleason) is admitted to a French hospital while on vacation with his wife Elsie (O’Hara). Stanley is adamant that he does not want his adult son Tom (Rick Lenz) to visit him on his deathbed. Overruling her husband, Elsie sends for Tom, a decision that upsets Tom’s wife (an underused Rosemary Forsyth). Through a series of flashbacks, Tom’s childhood is revealed, including the central conflict between his parents which has overshadowed much of his life. For while Elsie is a devout Christian fundamentalist, Stanley is an avowed atheist. Putting aside the question of how two people which such divergent views could have gotten along long enough to fall in love, both battle to shape Tom’s worldview. (As a child, Tom is played by Clinton Robinson.) Elsie brings Tom along to sermons preaching about the end of the world, while Stanley brings Tom to work with him. Stanley owns a successful piano moving business, hard labor which causes Stanley to frequently warn a young Tom to be something else when he grows up. In the course of his job moving pianos, he meets Lena (Winters), an eccentric artist who spends her spare time proselytizing the virtues of birth control to neighbors uninterested in her lectures. Stanley and Lena are instantly attracted to each other, but have different aims; Stanley is interested in a quick affair, while Lena is looking for another soul that she can connect with. Though they never consummate their affair, it nonetheless has a lasting effect on Stanley. In the present day, as Tom travels to France to visit his ailing father, he remembers the conflicts that drove them apart, with each flashback filling in the picture to how Stanley ended up in the hospital.

Though the concept of parents with opposing viewpoints on religion trying to raise a son in some kind of harmony has a lot of potential, a deeper examination of the topic is not on display here. Rather, it serves as the launching point for several twists and turns in the narrative which are meant to be comedic, but often fall flat. Gleason isn’t called “the Great One” for nothing, but there’s little he can do with a script that gives him all of the brutish qualities of Ralph Kramden but relies on the strength of his charisma to fill in the rest. O’Hara is a kind presence whose beliefs are treated with dignity, but the script doesn’t bridge the gap between what her character is said to believe, and how she can believe that but fall for a man who believes the opposite. Winters is left with even less to work with, her talents wasted on a women’s lib caricature that the screenwriter (Everett Freeman, adapting a book by Peter De Vries) doesn’t bother to flesh out. Against all odds, the character of Tom turns out to be a decent, upstanding young man (which seems improbable given what is shown of his upbringing), which means that neither actor playing him has much to do except to allow their more famous co-stars the chance to chew scenery.

On a production level, the film is hurt by the almost comical lack of attempt to differentiate between Gleason and O’Hara at different ages. They’re seen first in present day, and then appear in flashback scenes that are approximately twenty years earlier, looking exactly the same. When the character of Tom is played by two different actors at different ages, but his parents are played by the same actors in both period without even the slightest attempt to show the passage of time, it creates a disconnect that is hard to resolve on a visceral level.

There are fleeting moments of humor that have the potential to work. There’s one setup where Stanley, remembering how his wife was once the only apple in his eye, sneaks home and attempts to watch her changing by snooping outside the bedroom window. Predictably, the police attempt to arrest him for prowling. The setup is ripe for comedy, but the script fails to flesh out the scene, and the direction falls flat. This, in a nutshell, is the film’s problem: the ideas have potential, but the execution fails. This disconnect increases as the film progresses, until finally climaxing in a funeral procession (complete with original theme song) that is a total misfire. Gleason, O’Hara and Winters are great talents, but everything here feels forced. The script is rarely clever, and when it manages to be, the direction falters. There are brief moments throughout where the talent of the leads shine through, where it seems that the film will make an interesting turn or have something insightful to offer, but too often, it feels forced. Nonetheless, a Jackie Gleason performance can never be completely written off.

What’s left is a film with an identity crisis. The comedy is rarely funny, and the dramatic moments frequently fall short. The filmmakers seemingly are unable to decide if they’re making a comedic film with some dramatic moments, or a drama with some comedic undertones, and in their indecisiveness, the film strikes out in both categories. At one point, after enduring a series of misfires on her own, Winters cries out hysterically that “everything is so awful! Everything is absolutely and utterly awful!”

It’s hard to disagree with her.

The film is presented in a 1.78:1 aspect ratio which closely approximates the original 1.85:1 theatrical presentation. Unfortunately, that is probably the best that can be said about this transfer. The element used in this transfer, provided by Disney (the current owners of the ABC Pictures catalog of films), has seen better days. The color palette is often pale, appearing bland, though it can be hard to tell if this is due to the element aging or if the film has always looked ugly. Flesh tones can be inconsistent, and Maureen O’Hara’s red hair can go from vibrant to dull and back again, even in scenes set in the same time period. Far worse than the weak color is the amount of speckling and dust which appear consistently throughout the film. While this lack of cleanup never prevents the viewer from understanding what’s happening onscreen, it becomes a bit distracting in the final portions of the film, culminating in a series of scratches, debris and white streaks during Gleason’s climactic monologue. It’s watchable, but below the standards that Kino normally aspires to.

The film’s audio is presented in a lossless DTS HD-MA 2.0 mono track which my receiver decoded into the center channel. Though the audio is clearly superior to the video, it is not without problems. Though dialogue is mostly clear and generally easy to understand, the overall track has a harshness to it. There is also an occasional hiss that, while not too distracting, is nonetheless present, and often at the worst moments.

The disc does not include English subtitles.

The disc includes trailers of varying technical quality for five unrelated films but contains no bonus material related to the film itself:

How Do I Love Thee? is a film with an interesting premise and a stellar cast that manages to squander both. The film has scenes that are ripe with comic potential that frequently fall short, while scenes with dramatic intent are often inert. For fans of Jackie Gleason, seeing him onscreen can make up for a multitude of sins, but the film will likely hold a more limited appeal to those outside Gleason’s audience. The disc itself doesn’t bring much to the table, offering a mediocre transfer and little else.

My Titi Olga played the Mother Superior which is why I bought the disc. It reminded me of her telling me experiences on the set.

My aunt loved Maureen O'Hara and they became friends ....both being staunch Catholics helped. I recall that she said that Jackie Gleason was very nice.
I know much of it was filmed in Coral Gables where my aunt was a parochial school teacher .

Very cool!
You must log in or register to reply here.

A Few Words About A few words about...™ Dead of Night - in Blu-ray 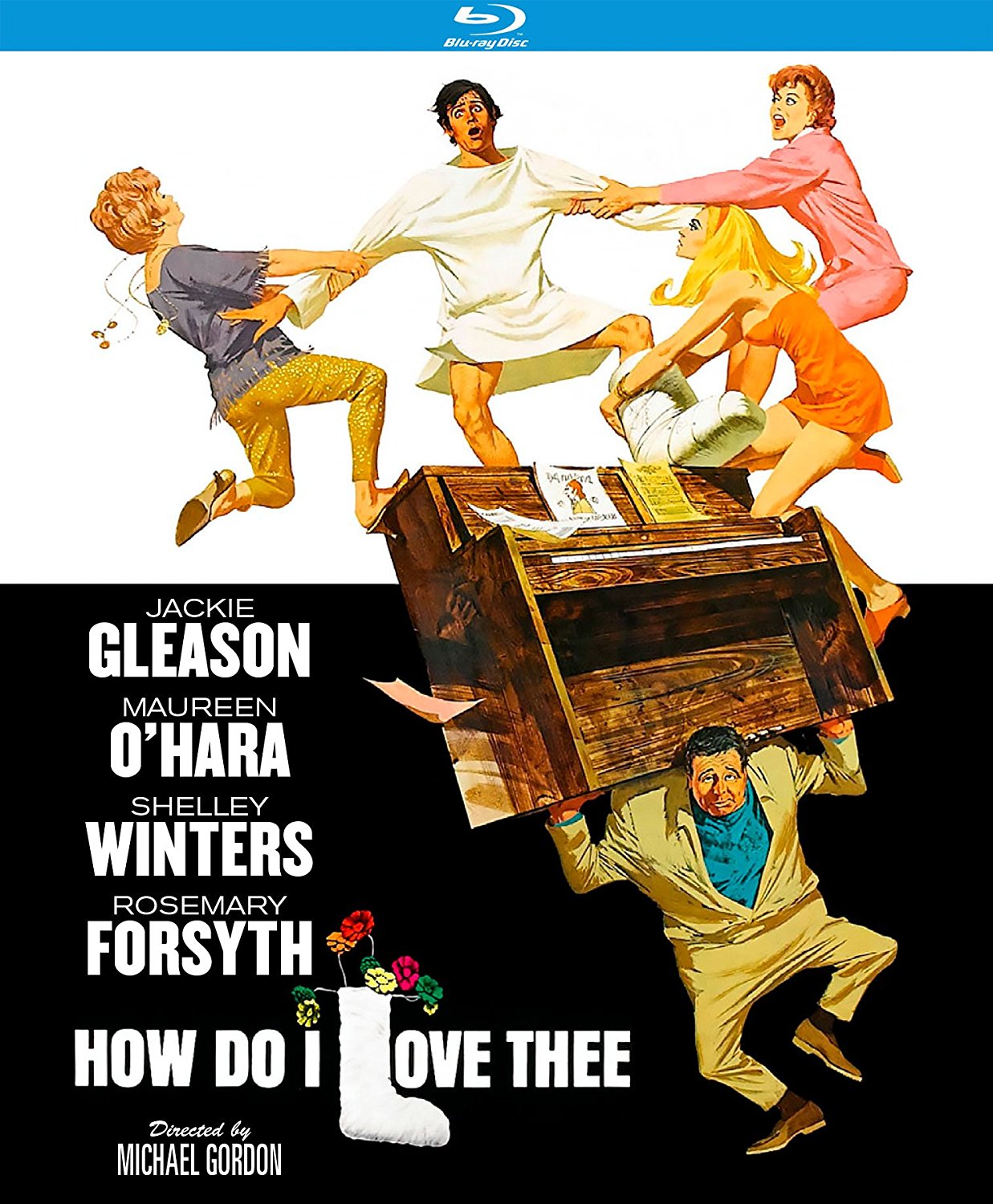