Forum List What's new Dark Style Change width
Log in Register
What's new Search
Menu
Log in
Register
Navigation
Install the app
More options
Dark Style
Close Menu
Posted on December 27, 2017 by Matt Hough
You are using an out of date browser. It may not display this or other websites correctly.
You should upgrade or use an alternative browser.
Biting, effective satire 4 Stars

A chaotic comedy of errors courtesy of the satirical pen of playwright Paddy Chayefsky, Arthur Hiller’s The Hospital is part personal drama and part lunatic comedy with a dash of murder mystery tossed in for good measure.

A chaotic comedy of errors courtesy of the satirical pen of playwright Paddy Chayefsky, Arthur Hiller’s The Hospital is part personal drama and part lunatic comedy with a dash of murder mystery tossed in for good measure. Dealing with the disorganization and indifference found in a massive urban medical center, this comedy hits its satiric targets dead on the nose while also attempting a trifle less successfully to explore the psyche of a doctor desperate to find life’s meaning when everything around him is so totally falling apart.

Herbert Bock (George C. Scott), the chief of medicine in the giant Manhattan Medical Center, is in the midst of a true mid-life crisis: he’s contemplating suicide; he’s impotent; his wife of twenty-four years has left him, and his children are aliens whom he feels completely responsible for their failure as human beings. His hospital is also presently under fire from neighborhood protestors angry that the ever-expanding hospital is tearing down their living spaces and from a recent spate of inexplicable deaths which have claimed a nurse and two doctors. In the middle of all of these problems, Bock becomes romantically drawn to the much younger Barbara Drummond (Diana Rigg) whose father is a currently a patient in the hospital. Barbara implores Bock to leave the chaos of the hospital behind, but he’s torn leaving the only thing that has ever had any meaning for him.

The hardest hitting aspects of Paddy Chayefsky’s Oscar-winning screenplay are the coruscating views on hospital services from which no one emerges with anything but black eyes: slow-witted, unobservant nurses, doctors more concerned with salaries and sexual trysts than medical care, fussy administrators whose paperwork is their religion, and the overall overcrowding, disorganization, and stupefying incompetence that transpires when the facility becomes too massive for anyone to have a firm handle on what’s going on. With all of that chaos occurring and a murderer on the loose striking seemingly at will, the more personal saga of George C. Scott’s Dr. Herbert Bock seems almost secondary. He’s allowed to stomp and bellow at the general ineptitude surrounding him (while occasionally finding a medical student whom he’d like to claim for the hospital) and gets one great monologue as he explains to Barbara Drummond the personal and professional impotency that’s occupying most of his thoughts nowadays. The suicide attempt is ugly and filmed excruciatingly in close-up by director Arthur Hiller who otherwise competently but without much flair manages to capture the other lunacy that is going on within and without the hospital. When the murderer’s identity is finally revealed, it is a surprise (followed by the somewhat drawn out explanation on how the murders were managed right under the noses of all of the various hospital personnel), but one can’t help feeling that the ending apart from the mystery’s solution is rather haphazard and a little unsatisfying, both for Bock and for the hospital.

George C. Scott earned another Oscar nomination for his work in the movie, and it’s an entirely deserved one. He’s alternately fuming and fighting to keep things running while chastising the constant errors that are responsible for missing patients and the loss of life. Diana Rigg is as appealing as always even with her Boston accent which comes and goes. Barnard Hughes has some great moments as her nutcake father, and Richard Dysart as one of the hospital’s most notoriously ghastly doctors registers strongly, too. Nancy Marchand makes for an impressively stoic director of nurses, but it’s Frances Sternhagen who walks away with her one big scene as the hospital financial director Mrs. Cushing who’s constantly at sea trying to run her department with no cooperation from patients or staff. Robert Walden has a good moment or two as Bock’s best friend, but keep your eyes open to see some early work by Lenny Baker, Katherine Helmond, Stockard Channing, and Christopher Guest.

The film’s 1.85:1 theatrical aspect ratio is faithfully delivered in this 1080p transfer using the AVC codec. Sharpness is certainly capable, but the overall image quality and color fidelity looks a little faded and a bit dated. Black levels look more like dark sepia than black. And MGM hasn’t gone to any trouble cleaning up the master used for this transfer: there is plenty of dirt and damage on display, enough to sometimes be distracting to the viewer. The movie has been divided into 24 chapters.

The DTS-HD Master Audio 2.0 mono sound mix sounds just a trifle trebly with very little on the low end. The dialogue is all nicely recorded and easy to understand, and the background score and atmospheric effects are blended with the dialogue smoothly. There are no problems with age-related artifacts like hiss or crackle.

Six-Page Booklet: contains some color stills, original poster art on the back cover, and film historian Julie Kirgo’s prescient analysis of the movie.

The Hospital remains an enjoyable and trenchant satire on the business of healing, and the film retains its power despite a somewhat lackluster video presentation from MGM. There are only 3,000 copies of this Blu-ray available. Those interested in purchasing it should go to either www.twilighttimemovies.com or www.screenarchives.com to see if product is still in stock. Information about the movie can also be found via Facebook at www.facebook.com/twilighttimemovies.

Sorry to hear about MGM’s lackluster transfer, but I’m anxious to enjoy this movie again for the first time in years. I loved it on its first release, and I think I saw it only one time since. There’s no way I won’t appreciate everything about it a million times better now.

At least it's out. Another great United Artists comedy of the 1970s to cross off the list.

I love this film and always saw it as a warm-up for Network just set in a hospital rather than a television network. Scott is fantastic in this. It is not as brilliant as Network but it is pretty damn good.
You must log in or register to reply here. 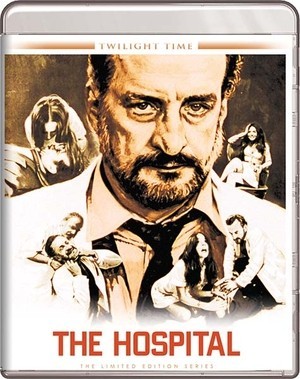