Forum List What's new Dark Style Change width
Log in Register
What's new Search
Menu
Log in
Register
Navigation
Install the app
More options
Dark Style
Close Menu
Posted on March 6, 2019 by Timothy Bodzioney
You are using an out of date browser. It may not display this or other websites correctly.
You should upgrade or use an alternative browser.
Highly recommended for horror fans 5 Stars

Arrow Films has released Eugenio Martin’s wonderfully exciting Horror Express on Blu Ray.  Horror Express like Night of the Living Dead seemed to instantaneously fall into Public Domain and as a result has been an ubiquitous staple in video bargain bins, most looking and sounding like a low budget movie made by indifferent and talentless filmmakers.  This release corrects that and is a cause for fan celebration.

1972’s Horror Express is so much fun that it should almost be illegal.  It is an international production filmed in Spain with American, European, Asian, and South American talent in front and behind the camera.  It defies genre classification as it has elements of horror, science fiction, espionage, disaster, and straight up adventure.  It was filmed like most Spanish and Italian films of the era without sound, the actors dubbing their voices for their respective markets.  It’s a wacky stew and in spite of all of this it succeeds and is enormously entertaining.

Horror Express takes place in 1906 on the Trans-Siberian Express as famed anthropologist Alexander Saxton (Christopher Lee) is returning to Europe with what he hopes is the missing link – or is it?  On the same train is Saxton’s professional rival, Dr. Wells (Peter Cushing).  Before leaving the train station in China a thief is found murdered on the platform near the chained crate containing Saxton’s specimen.  The only clues on the corpse are blood coming from his eyes, nose, and mouth and his eyes are completely white.  A Rasputin like monk warns those gathered around that something evil is about to be unleashed.

It’s an ingenious set up as once the train is moving everyone aboard is confined in close quarters with a creature that wipes clean the brain of its victims as it absorbs everything contained in that brain.  And as is the case with any good disaster movie, passengers come from all walks of life, each with a backstory.  Throw in a detective, two beautiful women, one a countess, the other a spy, a count, a Cossack captain played by Telly Savalas, and don’t forget the zombie Cossacks and you got exploitation cinema gold!

Produced in 1971 by blacklisted writer Bernard Gordon, the primary motive for producing the film was to utilize a very good miniature train model used in his film Pancho Villa, starring Telly Savalas and also directed by Martin from the previous year.  Martin’s fast paced direction keeps the movie zipping right along.  This edition looks so much better than anything that has preceded it that one can appreciate the resourcefulness of Production Desginer/Set Decorator Ramiro Gomez.  He works wonders with very little, redressing the same box car set over and over.  It is every bit as impressive as Bernard Robinson’s work at Hammer or Daniel Haller’s work at AIP.  Andres Fernandez, Carmen Manzano, and Charles Simminger’s costumes look rich and colorful belying the film’s reported $300,000 budget.

The script by Arnaud d’Usseau and Julian Zimet is gloriously all over the place.  There are traces of Shanghai Express, The Thing, Nigel Kneale’s Quartermass movies, Murder on the Orient Express, and Night of the Living Dead.  The script takes chances undreamed of in American horror movies of the era.

Horror Express is the 13th teaming (including cameos) of actors Christopher Lee and Peter Cushing since 1957’s Curse of Frankenstein.  Growing up in the late 60s/early 70s they were two of my favorite actors.  My Cleveland inner city neighborhood theater played horror films, particularly Hammer films, as kiddie matinees.  Cushing was a great actor who Freddie Francis said of, ‘there is not an actor in the world who can speak rubbish like Peter and make it sound real’; he deserved a better career.  Lee was a very good actor with tremendous presence who had a phenomenal final act.  Given how indiscriminate Lee was for much of his career I’m surprised he didn’t appear more on television.  He would have been the ultimate Columbo villain.

I think I first learned about this movie from Famous Monsters of Filmland magazine.  I knew this wasn’t a Hammer film and I was a devoted Hammer fan.  I remember thinking that this looked pretty cheesy at the time – Telly Savalas in a Spanish horror movie?!  Please be kind – I was only a kid at the time.

It opened in Cleveland exclusively at drive-ins in January 1974.  I was 12 years-old at the time and there were no hard-top bookings and good luck trying to convince an older sibling to see a movie at a drive-in theater in Cleveland in January!  I remember seeing Super 8mm prints for sale in the pre-VHS days, but the cost was too rich for a blind purchase.  I would have had to deliver a lot of newspapers to pay for a copy.  It wasn’t until around the year 2000 that I finally caught up with this movie via the Image DVD, which at the time was the best available edition.

It was worth the wait because Horror Express is a lot more fun than most of the previous (and future) outings starring Cushing and Lee.  It’s certainly better than any of their post Gorgon Hammer films.   As Stephen Jones and Kim Newman point out in their commentary, this is in some ways the ultimate Cushing and Lee movie.  It is one of the few movies where they actually function as a team.  As Jones and Newman suggest, this is what fans believed the pair to be like in real life.  It looks like they are having a lot of fun and it is infectious.  It is too bad they didn’t make a half dozen more films like this.

The rest of the cast including Alberto de Mendoza as Father Pujardov, Julio Pena as Inspector Mirov, George Rigaud as Count Petrovki, Alice Reinheart as Miss Jones, Victor Israel as the baggage man are all fine with de Mendoza shining brightest.  And last but certainly not least, Telly Savalas as Captain Kazan.  It’s Telly and like other actors such as Jack Palance or Rod Steiger, Telly is always fun; he’s a force of nature and even bad Telly is good.

Arrow is advertising this as a brand new 2K restoration off of original film elements.  It says inside the booklet that it is a scan off of the camera negative.   It looks great, far better than I’ve ever seen it.  The color is much better that Severin’s previous blu ray.  Cinematographer Alejandro Ulloa’s resourceful photography looks sumptuous displaying textures and details I’ve never noticed before.  Check out the detail and color on Cushing’s smoking jacket.

There are plenty of extras:

A newly recorded commentary with Stephen Jones and Kim Newman.  The commentary is very good, casual yet informative with decent amounts of gossip.  Both men met both Cushing and Lee and are able to speak about them first hand.  They also claim that Telly Savalas did the movie to pay the lease on his girlfriend’s West End flat – thank goodness for adultery.

A video apperception of the film by writer/historian Steve Haberman

Night Train to Nowhere – Ted Newsom sharing stories about his friend, producer Bernard Gordon.  Newsom tells the wonderful story of how Lee entertained his grieving friend Cushing to the point of forgetting that he wanted to leave the production.

Murder on the Trans-Siberian Express – an older interview with director Eugenio Martin.

Notes from the Blacklist – an interesting interview with writer/producer Bernard Gordon.  Gordon recounts his career and subsequent blacklisting.  When speaking of the blacklist era he says that director William Wyler supplied names of suspected communists to HUAC.  I hadn’t heard that before and definitely want to research that more.

A booklet containing essays by Adam Scovell and Mike Hodges

Horror Express is not high art, but it is a fun ride made at time when horror films were being co-opted by the big studios like The Exorcist and The Omen.  Unlike the big studio productions Horror Express doesn’t take itself seriously and hits all the right notes.  It’s a movie I could watch once a year.  Arrow has done a spectacular job both with the transfer and the extras.

Great review - sums up exactly why this movie appeals to so many fans of Cushing and Lee. I'll keep the old Severin copy as well as this one, since it has a bonus audio interview with Cushing that isn't on the Arrow.

Saw this many times through my childhood. The transfer always looked like crap. I could not believe how extraordinary this new transfer looks. It’s a great low budget science-Fi horror film

I've purchased a half dozen copies of this one over the years in search of a good copy. I'm quite happy with the Severin Blu ray and don't know if I can bring myself to purchase it again... Oh well... I'll drop a copy in my Amazon cart and watch for a sale price... Maybe I can hold out...

It looks like the ultimate release of the film you wouldn't regret it, far surpasses all the others out so far. Good fun.

I never thought that any of us would see "Horror Express" looking so great. I watched this new Arrow Blu-ray last night with a friend. Excellent.

It's a fun, entertaining, scary movie -- and this transfer is amazing.

I never heard of the movie until I got the BD, but I liked it! Weird, wild flick!

The Thing by any other name is still The Thing.

True, but The Thing with Christopher Lee, Peter Cushing, and Telly Savalas that takes place on a train, well that's another Thing. 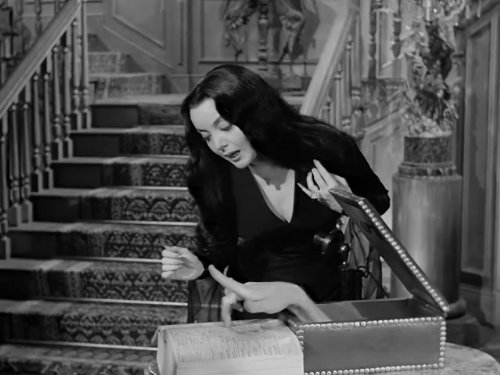