Walter Matthau and Glenda Jackson are deliriously reunited in Ronald Neame’s Hopscotch, a slight but stylish comedy caper film with Matthau at his drollest.

Walter Matthau and Glenda Jackson are deliriously reunited in Ronald Neame’s Hopscotch, a slight but stylish comedy caper film with Matthau at his drollest. With a rogue CIA agent squaring off against his own agency and the KGB (among other undercover operations around the world), Hopscotch skirts the globe with delightful ease and offers a wonderfully enjoyable lark where an underling gets to stick it once and for all to his obnoxious, ungrateful, and short-sighted bosses.

When CIA agent Miles Kendig (Walter Matthau) completes an operation in Munich to his satisfaction but without capturing his old KGB counterpart and friend Yaskov (Herbert Lom), he’s demoted from being a field agent to the records department by his insufferable boss Myerson (Ned Beatty). Refusing to take such an insult after his decades of faithful service, Kendig leaves the agency and goes rogue, typing up a manuscript of his experiences past and present within the agency and revealing delicate operations some of which are still in play and then mailing installments of his book to all of the major spy agencies around the world. Naturally, to shut him up, the CIA tasks Myerson with finding Kendig and stopping him before he can reveal everything he knows, and Myerson pulls in Kendig’s young partner/apprentice Cutter (Sam Waterston) who knows the way Kindig’s mind works better than anyone. Kendig leads the CIA and KGB on a merry chase around the world managing to stay two jumps ahead of his pursuers with the aid of former lover Isobel (Glenda Jackson) who’s based in Salzburg and carrying out Kendig’s plans on the European side of the equation.

The cat and mouse scenario of Hopscotch comes courtesy of Brian Garfield’s book with Garfield sharing on-screen writing credit with Bryan Forbes (who had penned an earlier draft when Warren Beatty was set to star in the movie). While the locales jump around the United States and various European stops as Kendig takes his possible assassins on a merry chase cleverly managing to thwart them at every turn, the film’s main purpose isn’t as a travelogue, and Kendig’s con games with the dimwits who are following him certainly don’t have the complexity of, say, the shenanigans pulled off in something like The Sting. But it’s all so drolly and smartly managed without undue fuss and bother, and Matthau’s leading character never makes the mistake of losing the audience’s good will by rubbing the bad guys’ faces in his continual successes unmercifully. Director Ronald Neame, never a flashy director, finds moments that are marvelously entertaining: the assassination of Myerson’s Georgia home (where a framed photo of Myerson that serves as inspiration for Kendig keeps subtly changing expressions during his tenure there), Isobel’s uber-cool handling of a pesky agent who’s keeping her under surveillance, and a climactic aerial chase between Kendig in a biplane and Myerson in a helicopter that serves up some surprises. So does the film’s coda which ends the movie on an upbeat note.

While this film doesn’t offer quite the equal status of opportunity for Walter Matthau and Glenda Jackson that their earlier House Calls afforded, it’s certainly a great showcase for Matthau who earned a Golden Globe nomination for his performance of sweet revenge with a smile on his face. Even when things go wrong with his careful preparations (those unpredictable automobile tires), he’s never less than completely together and on top of the situation. Glenda Jackson’s Isobel is clearly a secondary role despite over-the-title billing, but she proves she’s lost none of the sting she can muster when delivering acidic lines with just a touch of bite. Any film is better with her participation in it. Sam Waterston goes through the movie with a Cheshire cat grin on his face, fully aware that they’re dealing with a master fox who’s always thinking many moves ahead of the game. Matthau’s son David playing another CIA operative Leonard Ross is bested by his pop on a couple occasions. Ned Beatty is the perfect unbearable martinet boss who deserves to be made a fool of throughout, and we watch gleefully as he goes down in flames time and again. It’s also great to see veterans like Herbert Lom as KGB operative Yaskov and George Baker as Kendig’s book publisher Westlake doing so beautifully when the spotlight falls on them.

The film’s Panavision image has been framed at 2.39:1 and is delivered in 1080p resolution using the AVC codec. The very film-like grain structure is sustained throughout the entire running time of the movie without any digital noise reduction being utilized to smooth things out. Some may find the picture overly grainy, but it’s sharp and clear and wonderfully cinematic. Color is likewise well managed with believable skin tones. Contrast has been beautifully applied for a first-rate picture. The movie has been divided into 13 chapters.

The PCM 1.0 sound mix (1.1 Mbps) is very typical of its era of filmmaking. The dialogue has been professionally recorded and has been mixed well with the Ian Fraser-adapted Mozart and other classical music themes and the atmospheric effects which are never overly loud but which might not have quite the resonance of other mono soundtracks of the era. Most of the age-related artifacts like crackle, pops, and hum have been eliminated, but there may be the tiniest amount of hiss to be heard in some of the quieter scenes of the movie.

Alternate Audio Track: the TV-friendly audio track is offered as an alternative to the theatrical audio. It’s presented in Dolby Digital 1.0.

Ronald Neame/Brian Garfield Interview (22:00, HD): the director and the author are interviewed separately with their comments combined into this one piece filmed in 2002, both men agreeing on the wonderfully agreeable experience making this movie was.

Walter Matthau Interview (21:55, HD): Walter Matthau reminisces very amusingly with Dick Cavett in 1980 about his early years in show business and mentions his other 1980 movie Little Miss Marker in passing but with nothing to say about Hopscotch.

Enclosed Pamphlet: contains the cast and crew lists, information on the video and audio transfer, and film critic Glenn Kenny canny and expressive analysis of the movie.

Thanks. I've somehow missed this film over the years but it sounds like a can't miss with the cast and storyline. Between this and Philadelphia Story I have two titles already for the Nov B&N sale. 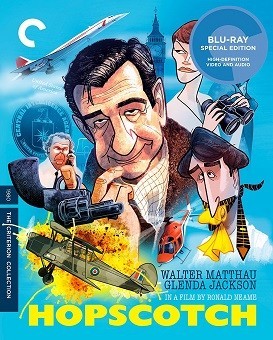