Steven Spielberg’s Hook finally gets a transfer befitting the director’s trademark in addition to some special features in Sony’s new 4K UHD release.

For years, director Steven Spielberg had teased us with his yearning to bring his version of Peter Pan to the big screen, starting as far back as his segment for Twilight Zone: The Movie. Then a script by James V. Hart caught his eye for a film that director Nick Castle was developing at TriStar. Hook asked the question, “What if Peter Pan grew up and misplaced his childhood?” An intriguing question, one that Spielberg may have been asking about himself at this point in his career. It had been nearly nine years since he had directed a “family” movie, E.T.: The Extra-Terrestrial, focusing mostly on more mature dramas that had been met with mixed results (The Color Purple, Empire of the Sun, and Always) as well as two Indiana Jones entries. With Spielberg expressing interest, Nick Castle stepped aside, and Robin Williams was cast as Peter Banning, Dustin Hoffman as Captain Hook, Bob Hoskins as Smee, Julia Roberts as Tinkerbell, and Maggie Smith as an elderly Wendy Darling. Before the film was even released (and years before the internet), word spread of major cost overages and falling behind schedule along with issues with Julia Roberts, with the trades and gossip rags predicting another 1941 for the master director. The movie ended up going around $20 million over budget and 40 days behind schedule, costing a whopping $70 million (in 1991 dollars).The film was ultimately successful, earning over $300 million at the worldwide box office.

Hook is a movie Spielberg fans really feel obliged to like (myself included). The movie runs a bit too long at 141 minutes, dragging in several places, especially the over-anticipation for Peter to remember his childhood as Peter Pan and get over his fear of heights to save his children and defeat Hook. The movie takes place during the Christmas holidays for no real reason other than that is when the movie was released. Hoffman chews the scenery, obviously having way too much fun portraying Hook. Bob Hoskins is terrific as Smee, and Charlie Korsmo delights as Peter’s son, Jack. Some interesting trivia – Caroline Goodall, who plays Peter’s wife Moira, would work with Spielberg again playing Oskar Schindler’s wife, Emilie, in Schindler’s List. And of course the blink-and-you’ll-miss-them cameos of Phil Collins, Glenn Close, David Crosby, Mick Fleetwood, Jimmy Buffett, Don S. Davis and a very young Gwyneth Paltrow (as a young Wendy).

I have to admit that I have owned Hook on every disc format the movie has been available on here in the US, and it has never looked good. The LaserDisc and SuperBit DVD often looked washed out and flat, batrhed in yellows and browns. The Blu-ray release in 2011 fared much better, with sharper detail but the colors seemed artificially enhanced, particularly the reds. Sony’s new 4k UHD release is a real eye-opener, perhaps the best the film has ever looked, even during its 70mm theatrical engagements in 1991. Per the press release, Steven Spielberg approved the use of HDR10 high dynamic range on this release, resulting in a more refined use of colors that appear somewhat muted compared to the Blu-ray release, but also more natural. Film grain is much more evident on this release, but is never intrusive. Contrast is also more under control, providing much more depth to the imagery and deeper blacks. Detail is excellent, sometimes too good, revealing some bad matte lines in some of TinkerBell’s scenes.

I always felt that the surround channels on the 5.1 DTS-HD MA track included on both the Blu-ray and this release were a bit too loud, often competing with the fronts. The new Dolby Atmos mix (which is Dolby TrueHD 7.1 compatible) solves that issue, never sounding overbearing. This is a more subtle track, blending the surrounds and heights with the fronts into a more immersive mix. Sounds are places more precisely within the soundstage, and John Williams’ score often places you in the middle of the orchestra pit. Heights are used mostly for atmospherics (such as the air pressure and jet engines on the plane, mayhem on NeverLand), but also used quite effectively during the pilot’s PA announcement and crowd noises. LFE is also tighter and more robust.

Every previous disc release of Hook has been movie-only, not even including the movie’s trailer. This UHD release fixes that, to a degree (something Sony has been doing quite well with its UHD releases that were barebones on Blu-ray). The included Blu-ray, though is the same barebones release from 2011.

Deleted Scenes (1080p; 8:20): Eleven “never never before seen” deleted scenes are interesting, most less than a minute each – Can You Crow?; What Would Peter Do?; Middle-Aged Man – Alternate; Believe in Fairies and Lost Boys; Did You Ever Want to Be a Pirate?; You Made Them Grow Up; Let’s Have Fun; Tink, That’s Me as a Baby; Peter, Where Did You Go?; Mr. Smee Pillages; and I’m Home.

Digital Copy: An insert contains a code to redeem a digital copy on Movies Anywhere. I received 4K UHD versions on Google Play Movies and FandangoNow, HD on Vudu and Amazon Prime Video. I do not own an Apple TV or an XBOX One so therefore cannot confirm the resolutions provided on iTunes and Microsoft Movies, respectively.

Hook is a movie that I often admit, reluctantly, to liking despite its many flaws. Sony’s new 4K UHD release finally presents the film as it was likely meant to be seen and heard, and the studio even included some deleted scenes and trailers. This is a worthy upgrade. 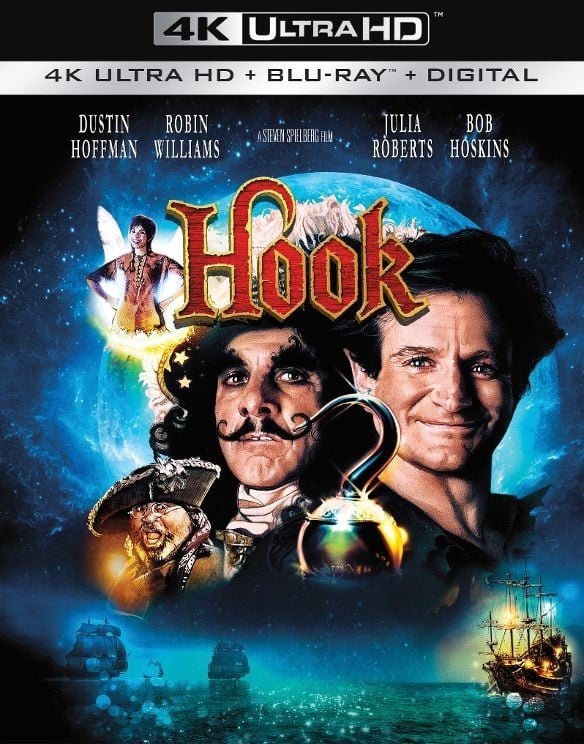