If hip-hop dance is your thing and the Step-Up musicals didn’t satiate the need to watch more of them, Honey 3: Dare to Dance will likely satisfy despite its piddling script and a lack of variety in the dancing.

The 21st century incarnation of those Judy Garland-Mickey Rooney “let’s-put-on-a-show” musicals comes to home video in Bille Woodruff’s Honey 3: Dare to Dance. With rap and hip-hop replacing Tin Pan Alley and swing and with far more emphasis on dancing than in those celebrated MGM musicals of old, Honey 3 will likely please dance fans who want a very familiar plot with a lot of talented people doing what they do best: jammin’ it on the dance floor.

When her college scholarship funds come up short to pay for her tuition and she’s forced to drop out, Melea Martin (Cassie Ventura) decides to take what was going to be her senior dance thesis, a hip-hop version of Romeo and Juliet, and stage it professionally to earn money to finish her degree. Her boy friend Erik Wildwood (Kenny Wormald) is providing the music, and Melea casts the rival families from among her school friends and the very talented neighborhood dancers. But rival street dancer Ishani Magona (Sibo Mlambo) resents an American coming into Cape Town and attempting to put native dancing on stage, and constantly gets in Melea’s face to make her close down her show. She’s even more resentful when the well known DJ Taj Mfeka (Clayton Evertson), whom she has a tremendous crush on, offers to work with Erik on the music for the performance and starts to take an interest in Melea himself. Warfare threatens to break out on the street as well as on the stage.

Catherine Cyran’s script is such a cobweb-encrusted collection of well worn show biz clichés with the tiresome jealousies, resentments, accidents, and quarrels which seem to be a part of all of these backstage show biz sagas, yes, even the Mickey-Judy musicals. No one wants to sit down and talk about frustrations, misunderstandings, and problems: it’s supposedly more dramatic just to storm off to be alone to work out how one feels about someone who’s getting too much attention or is not romantically drawn to one person or another. But exactly what one expects to happen dramatically does happen: things shape up, fall apart, and then come back together at the last minute for a triumphant final production though one never quite understands how one performance is going to pay Melea’s tuition when all of the theater repairs, costumes, and scenery have to be paid for somehow. The nature of hip-hop dancing gives a sameness to all of the early dance-offs between rival crews, and director Bille Woodruff doesn’t film these dances on street corners, schoolyards, and, of course, dance clubs with anything approaching originality. Instead, they’re usually filmed straight on in short bursts, often sped up to give the dancing more vivacity, and varying from full length to medium shots (which foolishly cut off the dancer’s feet, certainly important to see in a dance show). The last twenty minutes of the movie which gives us portions of the Romeo and Juliet hip-hop ballet (strangely, almost all group numbers with almost no pas de deux of important moments without others on stage) finds director Woodruff freeing up his camera more and becoming more intimately involved with the dancers and their moves from other angles. Frankly, it might have been a better idea to simply produce a hip-hop version of Romeo and Juliet and let that be the film instead of all of the tedious rivalries and changing relationships we’ve seen dozens of times in previous movies before we get to the best thing the film has to offer.

Cassie Ventura isn’t particularly noteworthy as a dancer or actress here, often staring down in scenes with other actors and holding back emotionally in the bigger moments. Much more appealing and talented is co-star Kenny Wormald as her boy friend Erik. He has a solo dance moment of truth after the couple’s breakup that puts much of the rest of the dancing in the movie to shame (and the closest the picture ever feels to an old fashioned movie musical), and he performs some quadruple pirouettes in the Romeo and Juliet sequence that shows he’s had serious dance training. Dena Kaplan as Melea’s best friend Nadine has some good dance moves and is a better actress than Ms. Ventura but isn’t given nearly as much to do in the movie as Melea’s rival Ishani played by Sibo Mlambo. Her role is the formula in-your-face rival from her very first encounter (who’ll eventually melt once the two enemies begin working together), but Mlambo pulls it off despite the clichés. Clayton Evertson as wealthy DJ Taj doesn’t dance a step and is the victim of some bad writing when he first says he isn’t interested in Ishani and later professes his long-held adoration of her, dialogue even the greatest actor couldn’t make work. Bobby Lockwood has fun with crew member Laser, and Ambrose Uren as Dajon, the first choice for Romeo before a tragic accident when he needs a last minute replacement (another cliché), dances well in a few short bursts.

The made-for-home video aspect ratio of 1.78:1 is delivered in 1080p resolution using the AVC codec. This is a reference quality video transfer with very rich and deep color saturation while still retaining believability, and sharpness that brings out much detail in hair textures and facial features. Contrast has been consistently applied for a brilliantly vivid image, and black levels are rich and true. The film has been divided into 20 chapters.

The DTS-HD Master Audio 5.1 sound mix will keep the subwoofer buzzing and thumping for over ninety minutes of almost continual hip-hop music and underscore bass. Dialogue has been well recorded and has been placed in the center channel. All of the music gets placed solidly in both the fronts and rears with excellent separation, and ambient sounds of crowd response and applause likewise immerses the viewer in the hip-hop world. Only a few moments during the rap soliloquies during the performance sequence seem a little out of balance.

Audio Commentary: director Bille Woodruff offers a rather ordinary commentary on his memories of shooting the movie. Everyone’s great and amazing and too little in the way of behind-the-scenes factoids find their way to the track.

Deleted Scenes (11:45, HD): seven scenes may be viewed separately or in montage.

Extended Dance Sequences (14:22, HD): six different sequences that have more movement than appears in the finished film. They can also be viewed together or separately.

Behind the Dance: The Making of Honey 3 (6:03, HD): director Bille Woodruff who has directed all three of the Honey franchise talks about the 2 ½-month shoot in South Africa, and the immeasurable help he got from the movie’s four different choreographers, each of whom talks about his or her area of expertise. Also commenting are actors Cassie Ventura, Kenny Wormald, Dena Kaplan, Sibo Mlambo, Bobby Lockwood, and producer Mike Elliott.

Battle Dakota Club (1:58, HD): director Bille Woodruff talks about the sequences featuring the dance battles between various hip-hop crews which forms the introduction to the movie.

If hip-hop dance is your thing and the Step-Up musicals didn’t satiate the need to watch more of them, Honey 3: Dare to Dance will likely satisfy despite its piddling script and a lack of variety in the dancing. The video and audio package is certainly near-reference in quality for all interested parties. 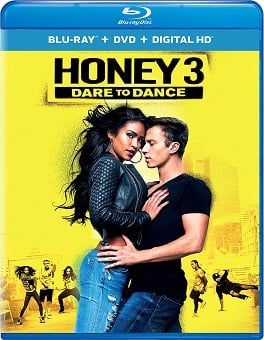