Forum List What's new Dark Style Change width
Log in Register
What's new Search
Menu
Log in
Register
Navigation
Install the app
More options
Dark Style
Close Menu
Posted on December 28, 2020 by Todd Erwin
You are using an out of date browser. It may not display this or other websites correctly.
You should upgrade or use an alternative browser.
Liam Neeson by the numbers 3.5 Stars

Liam Neeson plays a bank robber who wants to do the right thing by turning himself in, and instead is framed for the murder of a high-ranking FBI agent in Honest Thief, yet another Taken retread that even Neeson’s most ardent fans will find too familiar and illogical.

Tom Dolan (Liam Neeson) is a master bank robber, slipping in to vaults after hours completely undetected and making off with over $9 million over the last few years, with the press nicknaming him the “In and Out Bandit.” One day, Tom walks into a self-storage facility to rent a locker (presumably to store his money), and in addition to renting a locker, falls in love with the facility’s manager, Annie (Kate Walsh). A year later, Tom and Kate are looking to buy a house together, but Tom suddenly has the urge to do something first – turn himself in to the FBI, hoping to cut a deal that includes a measly 2-year sentence in a minimum-security prison with full visitation rights. Um, sure, Tom. At first, when he calls the FBI, he is connected to Senior Agent Samuel Baker (Robert Patrick), who doesn’t believe him but humors him enough that he agrees, along with his partner Sean Meyers (Jeffrey Donovan), to send some agents over to Tom’s hotel. But Baker assigns two lazy and corrupt junior agents, Nivens (Jai Courtney) and Hall (Anthony Ramos), to interrogate Tom at his hotel (why he is hiding there rather than his apartment is a mystery). Once Nivens and Hall find close to $3 million in Tom’s self-storage locker, Nivens decides to keep the money for themselves, stashing it in an FBI safe house, with plans to kill Tom afterwards. But Tom becomes impatient while Nivens and Hall are ransacking his locker, so he calls Baker at the FBI to complain, only to be connected to Meyers instead, who thinks Tom is a hoax and brushes him off. Baker finds out and decides to check up on Nivens and Hall at Tom’s hotel, and is instead executed by his two junior agents who then decide to frame Tom for the murder.

If you’ve seen any of Liam Neeson’s recent action-thrillers in the last decade or so, you know where this movie is going. Honest Thief takes that formula and follows it to the tee. Tom has been wronged, someone he loves has been put in danger, and he’s out for revenge. As good as the performances are in this film, and regardless of how entertaining the movie is for the most part, it is the illogical and even naïve steps Tom takes that as a viewer one has to wonder if he’s so clever in evading capture while breaking into bank vaults, how on earth can he honestly believe the FBI is going to strike such a weak deal in return of both the money and himself? Honest Thief is predictable but at the minimum an entertaining diversion, and nothing more.

Universal brings Honest Thief to Blu-ray with a fairly immersive DTS-HD MA 7.1 track that is wide and expansive. Mark Isham’s score surrounds the viewer, as do gunshots and speeding cars. LFE is very strong, providing the score with a nice low end while adding additional presence to gun shots and crashes. Dialogue is clear and understandable throughout.

The only “extras” are the movie on DVD and a Movies Anywhere digital copy code.

Honest Thief is a serviceable thriller and entertaining diversion if you just don’t think too much about the absurdity of what the main character was hoping to achieve at first.

Mark
You must log in or register to reply here. 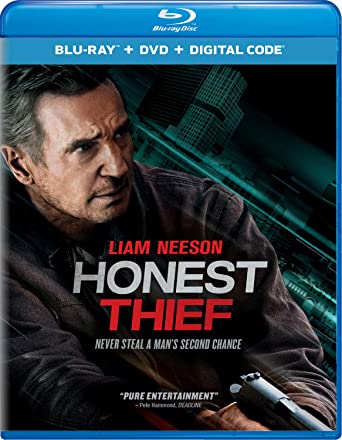