Forum List What's new Dark Style Change width
Log in Register
What's new Search
Menu
Log in
Register
Navigation
Install the app
More options
Dark Style
Close Menu
Posted on December 8, 2017 by Matt Hough
You are using an out of date browser. It may not display this or other websites correctly.
You should upgrade or use an alternative browser.
Forgettable romantic comedy 2.5 Stars

After doing award-winning caliber work on television’s Big Little Lies this past season, it’s somewhat disheartening to see the talented Reese Witherspoon succumb to such a generic, marshmallowy romantic comedy like Hallie Meyers-Shyer’s Home Again. Undistinguished in just about every way even with an appealing cast of players going through the patented romantic comedy clichés supplied them, Home Again is completely forgettable, disposable cinematic fare.

Leaving her unsatisfying marriage behind her in New York City, Alice Kinney (Reese Witherspoon) moves herself and her two pre-adolescent daughters (Lola Flanery, Eden Grace Redfield) to Los Angeles returning to her palatial childhood home now left empty by the death of her famous, Oscar-winning filmmaker-father. Alice wants to begin a career in interior design, but on the night of her 40th birthday party, she meets Harry (Pico Alexander), George (Jon Rudnitsky), and Teddy (Nat Wolff), three young filmmakers – director, writer, actor – who need a place to live while they complete their first movie deal, an extension of an award-winning short film they had previously made. The sweet young men, all in their late 20s, fit right in with Alice’s new lifestyle, and she agrees to let the men stay in her guesthouse temporarily, an especially fortuitous decision since they’re great with her kids, excellent cooks, and offer her a focus when things don’t go smoothly with her budding new career. As Alice develops a tentative romance with Harry, her newfound happiness becomes complicated when her estranged husband Austen (Michael Sheen) shows up with a suitcase in his hand ready to rebuild his and Alice’s marriage.

Director Hallie Meyers-Shyer, the daughter of romantic comedy maven Nancy Meyers, wrote the script obviously based on her own Southern California upbringing offering a completely skewed worldview of breaking into a business. How great it must be to be a struggling artist (whether it be in cinema or interior design) and to have no monetary worries at all! In fact, besides living in a grandiose Spanish-style hacienda Alice barely works at getting her design business off the ground; she has one snobby, insufferable client Zoey (Lake Bell) whom she allows to treat her like a servant, but is not out pounding the pavements looking for clients, and the young filmmakers likewise have fancy threads and money enough to go to L.A. bars to get plastered. They are all obviously suffering in luxury for their art. In addition to the undistinguished direction, some fundamental mistakes have been made here in choosing the absolute wrong person for Alice to become attracted to (the good-looking but insensitive Harry when it should have been the more sensitive George who is really great with her children and is the most grounded of the three guys completing other script-writing jobs while the trio waits for their movie to be green lit) and setting up predictable conflicts for the May-December couple (well, to be fair, more like the May-September couple) as well as the big climax when the boys have to make a choice of disappointing one of the children at her school play or remaining at a business meeting to fight for the movie they want to make. The only real question that isn’t automatically preordained is whether Alice and Austen will get back together, but their previous problems and clashes are dealt with in such a cursory, superficial fashion that it’s not that big a deal whether he returns to the family or not.

Reese Witherspoon makes the film palatable with her likable demeanor even though the forty-year old she’s playing seems to vacillate too abruptly from coquettish bar girl to motherly nurturer in the blink of an eye and seems alternately weak or viperish depending on her mood. Candice Bergen as her movie star mom is painfully underused, handling the dialogue she’s given with the practiced hand of a comedy master but is not in enough of the movie. Michael Sheen likewise isn’t given enough meat to formulate a well-rounded character emerging simply as a workaholic who has never learned to stop and smell the roses until it’s too late. The three young housemates act their roles as written, but there’s a decided lack of chemistry between Reese Witherspoon and Pico Alexander as the lovers and much more appealing and charismatic work is turned in by the other two flat mates Jon Rudnitsky and Nat Wolff (whose characters both become successful pretty quickly in show business terms). Lake Bell gives the film its major dose of spicy conflict as the Beverly Hills housewife too preoccupied with her own life to care about anyone else’s.

The film is presented in its theatrical aspect ratio of 1.85:1 and is offered in 1080p resolution using the AVC codec. Sharpness is excellent, and color saturation levels are strong but also completely natural. Southern California looks great here. While contrast is usually consistently applied, there are occasional lapses where things appear a little milky reducing the otherwise very good black levels to merely average. There is also a tiny bit of moiré to be glimpsed in some sheer curtains. The movie has been divided into 20 chapters.

The DTS-HD Master Audio 5.1 sound mix is fine but nothing exceptional. Dialogue has been nicely recorded and has been placed in the center channel. The background music score of John Debney does get the full surround treatment, but much of the ambiance is front-directed instead of filling out both the fronts and the rears.

Audio Commentary: writer-director Hallie Meyers-Shyer and producer Nancy Meyers, daughter and mother, have a chatty, full-bodied commentary offering lots of background on the casting and recalling anecdotes of shooting scenes as they appear.

Home Again is a genial but forgettable romantic comedy. Despite its pleasing actors and beautiful California locations, this movie would likely serve more effectively as a rental item for fans of the stars.

It's amazing that Meyers-Shyer decided to break into filmmaking with a bold choice: to create a film just like everything her mother ever did!

Way to cut that umbilical, Hallie! 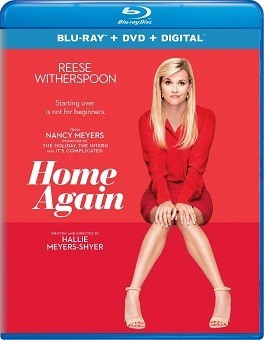