Posted on November 2, 2017 by Matt Hough
A pleasant but unnecessary sequel 2.5 Stars

If the original Home Alone left you wanting more of the same, you should find Home Alone 2: Lost in New York exactly what the doctor ordered: a rehash of the original film with bigger, dirtier ambushes on display.

Fashioning sequels to hit movies can go one of two ways. The filmmakers can either take the original material and enhance it with deeper, more meaningful ideas, characterizations, or motifs thus producing a movie that’s equal or superior to its parent film (think The Godfather Part II, Aliens, or Toy Story 2 and 3), or they can take the original material and regurgitate it in a new package (which is what most sequels inevitably do). Home Alone 2: Lost in New York is the poster child for unnecessary sequels. The original production team and actors basically redo their shtick in a different location that nevertheless feels almost entirely the same. It feels entirely unnecessary, too. For the few laughs the film generates, the sense of déjà vu is so prominent that even those chuckles don’t spring from anything novel on the screen but rather the anticipation of reliving that sense of freshness and fun the first film had that this one vainly tries (and fails) to recapture. This 25th Anniversary Fox release is the original 2009 Blu-ray release in new packaging but with the same audio and video transfers and barren slate of extras.

Once again the McCallister family, in its haste to make a last minute airplane connection to Miami Beach, get separated from youngest child Kevin (Macaulay Culkin) in the airport. He mistakenly gets on a plane to New York City where, armed with some cash and his father’s credit card, manages to have a pretty sweet vacation for himself. Sweet, that is, until he runs into escaped “Wet Bandits” Harry (Joe Pesci) and Marv (Daniel Stern) who are planning to rob New York’s largest toy store after hours. Kevin sets up a series of booby traps at his uncle’s apartment which is being renovated, interrupts the crooks in mid-robbery, and lures them into his lair of pain and punishment where the chaotic retribution of the original film is repeated.

John Hughes wrote and produced and Chris Columbus directed both the original film and this sequel, and the two men have delivered a near mirror image of the original movie. Sure, there are variations in setting, Kevin befriends a lonely bird lady (Brenda Fricker) instead of a lonely snow shoveler, and the second film is nearly half an hour longer than its predecessor. But in every other respect, Kevin’s battles against authority figures like the Plaza hotel staff (instead of an imperious neighbor) and the two bumbling burglars constitutes nothing bright or innovative. The extra length actually works against the film since it’s almost an hour before the adversaries come face-to-face on the streets of New York and then another thirty minutes before the mayhem begins for them. That makes for a lot of space to fill with uninteresting segues with Kevin’s enormous room service supper of sweets, the lengthy encounter with the pigeon lady who takes him to a concert at Carnegie Hall, and one short, sweet moment with toy store owner Mr. Duncan (Eddie Bracken). We walk around many portions of Central Park (Kevin has a kind of moody sojourn there at night which is the most atmospheric sequence in the movie before meeting the pigeon lady), Chinatown, the World Trade Center (bittersweet memories as we watch him on the observation platform), and Rockefeller Center to get a good feel for the city, but it seems to take an enormous amount of time to get to the film’s raison d’etre: the assaults on the two imbeciles.

Two years older than in the last film, Macaulay Culkin isn’t as naturally precocious or adorable here, and he seems less invested in what’s going on in the movie. His line readings are flat, and he seems much more mechanical than in the first picture. Joe Pesci and Daniel Stern mug and grimace appropriately as the brainless bandits while Tim Curry gets to plot deviously and then squirm unmercifully as the Plaza’s suspicious concierge. Rob Schneider, Ally Sheedy, Dana Ivey, and even Donald Trump have some forgettable bits in the film though John Heard and Catherine O’Hara pretty much go through their same bag of tricks as the befuddled parents. Brenda Fricker’s face may be dirty, but she appears rather too hale and hearty for believability as a street lady. Still, she really tries and succeeds to give the most poignant performance in the movie.

The film’s 1.85:1 theatrical aspect ratio is faithfully delivered in 1080p using the AVC codec. Inconsistency is the word of the day in terms of this transfer with almost every element running the gamut from very good to mediocre. Sharpness is often striking but sometimes a little soft and indistinct. Color can be rich with hues well saturated, but there is some occasional noise especially in the reds as the transfer struggles to resolve the grain structure of the original cinematography. Black levels are variable but more often good than not. Flesh tones seem to swing wildly from natural to overly red and blooming (Stern’s face is cherry red throughout). The image is mostly clean, but there is a stray white speck here and there from time to time. The film has been divided into 29 chapters.

The DTS-HD Master Audio 5.1 sound mix doesn’t have much to offer the rear channels with most of the sound activity being directed to the fronts, a disappointment with a bustling city like New York at Christmastime as a setting. John Williams’ score could have been much better orchestrated throughout the soundfield for a greater impact, but such is not the case here though to be fair the many holiday standards played during the movie get a fair amount of spread in the rear channels. There are a few ambient sounds in the rears (a late film pigeon attack is the most notable), and the LFE channel kicks in during a few of the more painful booby trap outcomes for the hapless victims. 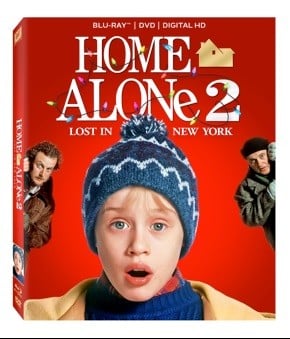