Mitchell Leisen’s Hold Back the Dawn amalgamates the dry, sometimes biting cynicism of Billy Wilder (no coincidence: he co-wrote the film with Charles Brackett) with the director’s own more judicious graciousness toward humanity.

Mitchell Leisen’s Hold Back the Dawn amalgamates the dry, sometimes biting cynicism of Billy Wilder (no coincidence: he co-wrote the film with Charles Brackett) with the director’s own more judicious graciousness toward humanity, and what it results in is a spirited comedy-drama focusing on a man who learns about life and love through the eyes of someone with absolute goodness, something which the film’s protagonist has in very short supply. A fine cast and excellent production personnel assure that Hold Back the Dawn is a classy, adult entertainment.

Impressionable, inexperienced teacher Emmy Brown (Olivia de Havilland) is swept off her feet when she meets Georges Iscovescu (Charles Boyer) in a Mexican border town. Unaware that Georges is an opportunist looking for an American woman who will unwittingly help him get a green card by marrying him, Emmy and Georges tie the knot after only a couple of days. While carrying out this charade and waiting four weeks for his papers which will allow him to enter the United States, Georges begins actually to fall for Emmy, angering his former girlfriend/con-woman Anita Dixon (Paulette Goddard). As his scheme is jeopardized by an inquisitive U.S. immigration agent Inspector Hammock (Walter Abel), Georges’ marriage to Emmy must appear to be a real love match in order to convince the agent to allow him passage to America, and Anita’s persistent demands that Georges affirm his partnership with her threaten to scuttle his scheme from working at all.

Charles Brackett and Billy Wilder’s Oscar-nominated adaptation of Ketti Frings’ story pours on the disparaging side of human nature especially in the character of Anita who has absolutely no conscience about duping whomever necessary to get what she wants. Written in flashback style as Georges relates his tale to a Hollywood director (played by the film’s director Mitchell Leisen himself) hoping to earn some money for a screen story, the film becomes mostly Georges’ narrative as he learns through a series of eye-opening experiences what it means to love and care for someone other than himself. Leisen leavens the acidity through not only the shining character whom Olivia de Havilland plays but also through the use of some interesting secondary characters, too, especially an expectant mother Berta Kurz (Rosemary DeCamp) who’s willing to move heaven and earth to have her baby born in America. Yes, there is a standard Hollywood meet-cute for Georges and Emmy (some tiresomely mischievous students of hers set off firecrackers at Georges’ feet), but the film’s best sequence remains the honeymoon where the couple visit the beach and Emmy goes splashing about in the surf registering complete joy on her face and then take part in an exquisitely directed and shot reaffirmation of their vows in a beautiful church all the while Georges makes every possible attempt to keep the marriage unconsummated. If the ending resorts to rather standard Hollywood sentimentality, Leisen doesn’t milk it to the extreme, and the movie’s final shot will remind one of Norma Shearer’s final rush to her beloved in The Women or Deanna Durbin’s similar move in His Butler’s Sister.

Olivia de Havilland received an Oscar nomination for her fine, solid performance as Emmy wearing her love and trust on her sleeve until it’s wickedly snatched away (she was famously pitted against her sister Joan Fontaine’s performance in Suspicion for the Best Actress prize that year, and when Joan won, it resulted in a sisterly rift that was really never repaired). It’s really Charles Boyer’s picture, however, as his character goes through the most character permutations during the course of the film, and he’s excellent in achieving them. Paulette Goddard plays another spitfire eager to have her way and quick with the putdowns and wisecracks that take no prisoners. Walter Abel makes a fine antagonist as the immigration official determined to keep illegal immigrants on the Mexican side of the barrier, and Rosemary DeCamp breaks all hearts as the sweetly patient but determined immigrant woman with dreams of a better life for her child. In addition to Leisen’s cameo, you’ll note Veronica Lake, Richard Webb, and Brian Donlevy in brief bits as Georges enters a soundstage where the movie I Wanted Wings is being shot.

The film’s original theatrical aspect ratio of 1.37:1 is accurately reproduced in this 1080p transfer using the AVC codec. It’s a velvety transfer with excellent sharpness and appropriate film grain that give an accurate display of movie imagery circa 1941. There is a single, fleeting scratch that pops up in the center left of the screen, but otherwise the image is quite beautiful with outstanding black levels and crisp, pure whites. The movie has been divided into 12 chapters.

The PCM 1.0 sound mix is certainly of its era, but Arrow Academy engineers have done an outstanding job cleaning up any audio anomalies and offering the listener a solid, artifact-free experience. Dialogue, Victor Young’s Oscar-nominated music score, and the sound effects have all been splendidly blended into a single, quite vivid soundtrack.

Audio Commentary: film scholar Adrian Martin offers an adequate but sometimes lacking-in-detail commentary on the movie where he explains plot events and character motivations we can see for ourselves but doesn’t give much insight into the making of the movie.

Love Knows No Borders (22:15, HD): a newly filmed video appreciation by film critic Geoff Andrew that emphasizes the contributions of underrated director Mitchell Leisen to the film’s success while also discussing the film’s structures, and the effectiveness of the three above-the-title stars.

The Guardian Lecture: Olivia de Havilland (1:26:55): a 1971 audio-only question-and-answer session held at the National Film Theatre in London where the actress covers many of the high points of her career.

Enclosed Booklet: the nineteen pages offer some gorgeous stills from the film, information on the video and audio transfer, and new writing on the film by writer and critic Farran Smith Nehme.

Hold Back the Dawn becomes even more relevant in today’s climate where so much discussion is given to immigration to the United States. Mitchell Leisen’s smooth and solid comedy-drama traverses the situation quite intelligently while offering a portrait of a man who takes stock of his life and looks for something better, out of his life and out of himself. Recommended! 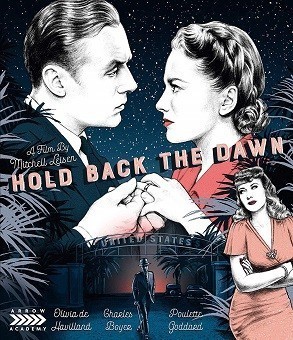