Forum List What's new Dark Style Change width
Log in Register
What's new Search
Menu
Log in
Register
Navigation
Install the app
More options
Dark Style
Close Menu
Posted on March 8, 2020 by Timothy Bodzioney
You are using an out of date browser. It may not display this or other websites correctly.
You should upgrade or use an alternative browser.
Highly recommended 4.5 Stars

Kino Lorber has released Hercules in the Haunted World, the latest release in their Mario Bava Collection.  Kino has really gone out of its way to provide the definitive edition of Bava’s magical sword and sandal epic by including three different cuts of the movie spread out over two discs; the American, the British, and the Italian, though this version has German titles (?)! I don’t know how much Hercules in the Haunted World has to do with Roman mythology, but it is irresistible for anyone interested in colorful, low-budget creative movie making.  Don’t question anything going on onscreen, just sit back and submit yourself to Bava’s phantasmagoric cinematic ingenuity.

Like many epic stories, Hercules in the Haunted World begins with Hercules (Reg Park) on his way home from unstated adventures/battles.  The movie opens with Hercules’ companion Theseus (Giorgio Ardisson) and Persephone (Ida Galli) ambushed by a band of outlaws at the direction of villainous Lico (Christopher Lee).  Hercules intervenes by throwing a wagon at the thugs, who upon learning that their target was none other than the mighty Hercules quickly disperse.

Hercules and Theseus decide to split up so that upon his arrival home so Hercules can be reunited without distraction with his betrothed, Princess Deianira (Leonora Ruffo) and Theseus and Persephone can go back to making out.

Hercules discovers Deianira upon their reunion in an almost catatonic state (she is under a spell by Lico).   Hercules is told by the oracle Medea that the only way Deianira can be released from this state is for Hercules to travel to Hades and retrieve the Stone of Forgetfulness.  With this, Hercules along with friend Theseus and comic relief Telemachus (Franco Giacobini) embark on yet another odyssey.

Hercules in the Haunted World is the second feature directed by the great Mario Bava.  Bava, the son of Italian special effects pioneer Eugenio Bava started his career as a cameraman eventually becoming a cinematographer, could be called a cinematic magician.  Because Bava often filled multiple roles behind the camera roles including writer and special effects man, he’s sort of like an Italian Edgar G. Ulmer.  Like Ulmer, Bava spent the bulk of his career in low budget genre movies.

Bava, as a director and cinematographer worked strikingly in both black and white and color.  His first credited movie as a director is the haunting and visually stunning 1960 La Maschera del Demonio, released in the US by American International Pictures as Black Sunday.  Black Sunday loosely based on Nikolai Gogol’s Viy is a masterpiece of atmospheric filmmaking.

Black Sunday is arguably Bava’s best, most satisfying movie.  When I was a child, I would have said that Black Sunday, until I saw Night of the Living Dead in 1968, was the scariest movie ever made.  And even after that, it was a close second.  If memory serves me correctly, when Black Sunday used to air on The Ghoul’s Nightmare Theatre in Cleveland, it was one of the few movies The Ghoul didn’t add comic sound effects to – now that’s respect!

The black and white camera work by Bava in Black Sunday is remarkable for a low budget horror film.  There’s a 360-degree camera movement in a crypt that should excite any film geek that is so subtle that it took numerous viewings before I even realized it was there.  The film’s morbid themes deal with sex and death, more specifically the attraction to darkness, or the unhealthy.  How this movie, and for that matter, all horror movies until the late 60s were marketed in the US as matinee fare still astounds me.

Hercules in the Haunted World is sort of like the flip side of the Black Sunday coin; it is bursting with color and life.  The film opens outdoors with Theseus with Persephone rolling around in a hayloft as Hercules grooms himself for his reunion with Deianira.   Hercules goes through a stylized, studio created hell (literally) to save his beloved Deianira from the unhealthy influence of Lico.  When order is restored the film returns to the beautiful exteriors of the opening.

Who better to represent darkness than Dracula himself, Christopher Lee.  He would go onto playing a similar role in Bava’s later The Whip and the Body.  The Whip and the Body is interesting in that Bava attempts to meld the themes and styles of Black Sunday and Hercules and the Haunted World into one movie.

While Lee eschewed playing Dracula for 8 years after Hammer’s first film and complained of his association with the role and horror films throughout his long life, he didn’t seem to mind cashing in on the image, especially in the foreign films he appeared in during this period.  While nowhere in the film is Lico presented as a vampire, in the Italian prologue he is.  Perhaps Lee thought there was little chance of these films being seen in England and the US?  Lee is always fun to watch and is easily the most professional of the film’s leads.

It is unfortunate that Lee’s distinctive voice, like many of the international productions he appeared in the first half of the 60s, was not used for the English language versions.  Though it sounds like the actor voicing the role is imitating Lee.  I’m sure he omission of Lee’s voice had to do with pennywise distributors not willing to pay Lee’s price for an afternoon in the recording booth.  I was recently watching one of the German Krimi’s in which Lee played a Chicago cop; talk about weird casting.  Even weirder is that while Lee’s voice is not used in the English version, it is used in the German version!  I would be curious to hear Lee’s crack at a Chicago accent.

Casting in these movies is always problematic.  I find them so even in the leads of Ray Harryhausen’s larger budgeted mythological films.  How many good actors have a body like Hercules?  I remember being underwhelmed by Reg Park when I first saw this on DVD 20 years ago.  As is often the case, I found that after multiple viewings for this review I’ve reversed myself and now find Park to be perfectly fine – he obviously looks the part and this time I found him to have a laid-back, easy-going charm.  He isn’t taking any of this too seriously.  I may get some flak for this, but I find Park more charming than either Kerwin Mathews as Sinbad or particularly Tod Armstrong as Jason.  Even Franco Giacobini’s comic Telemachus is okay by me; he’s much less annoying to me than most comic actors in Italian genre movies (see Bava’s Dr. Goldfoot and the Girl Bombs for painful comic relief).

Kino’s blu ray of Hercules in the Haunted World looks spectacular.  All three versions look the same to me, the only differences being the prologues or credits.  Like most of his movies whether credited or not, Bava also served as cinematographer and his work here with minimal resources shines as colors and shadows stand out.  With all the genres Bava dabbled in, it’s too bad he never tackled crime or noir in this period of his career

Hercules in the Haunted World sounds fine.  The American and British cuts use the same soundtrack.  The Italian is different but sounds fine.  It’s interesting to listen to the different pronunciations of mythological character names in English and Italian.

Kino delivers a wonderful set of bonus features.  They include:

On one disc the US cut, on the second disc the Italian and British cuts.  The main differences seem to be with the inclusion of a prologue.  The Italian prologue sort of sets up the film while the American prologue almost seems like a trailer for the film you are about to watch.  There is no prologue on the British cut.

US and British trailers

Subtitles on the Italian version (obviously) and on the American version.

An interview with actor George Ardisson conducted shortly before his death

And last but not least, a comprehensive commentary on the Italian language version by film historian Tim Lucas, author of Mario Bava: All the Colors of the Dark.  Since I’ve started reviewing movies on disc I have paid much more attention to commentaries than I did before.  This necessitates my watching titles multiple times.  Tim Lucas’ commentaries are always among the best, but this one is even better than usual, undoubtedly due to his connection with the director.  Lucas gives an amazing amount of production information up to specific details about set dressing and design.  Lucas states that Bava had four pillars and an ornate doorway at his disposal and used these items either judiciously or with camera tricks to create the illusion of much larger interior sets.  Lucas also explains in great detail all of the in-camera/practical effects that include double exposure that Bava used throughout the production.  Lucas also makes informed guesses about how scenes were possibly rearranged during editing.  If one has an interest in how talent can overcome minuscule budgets, this commentary is essential.

Movies like Hercules in the Haunted World are like catnip for me.  I regretfully missed seeing it theatrically by only a couple of years.  Mario Bava is deservedly a horror cult favorite – his influence on the genre is immeasurable and continues to this day.  Bava’s Drop of Water sequence from 1963s horror anthology Black Sabbath stands up not only as great horror filmmaking but great filmmaking period.  Bava’s use of color and shadow rivals anyone.  His talent and imagination often triumphed over meager budgets.  It’s fun to consider what Bava would have produced had he been willing to work outside of Italy and on larger budgets.  Sadly, when offers came he declined.  But on further thought, perhaps what makes Bava so special is the circumstances he created his magic?

Great review and after watching everything on the disc, I completely agree.

Great review. This is one of my more favorite additions to my library in the past year or so. I think Reg Park is great in the film and holds his own against his peers in other fantasy films like the mentioned Mathews and Armstrong.

Spot on review and a great buy for what’s included. I hope this sells really well so we can finally get a decent release of the one that started them all-the Steve Reeves Hercules. What’s out there In DVD are all in bad shape- barely watchable. Does anyone know if it’s even possible to get a good print of it?
You must log in or register to reply here. 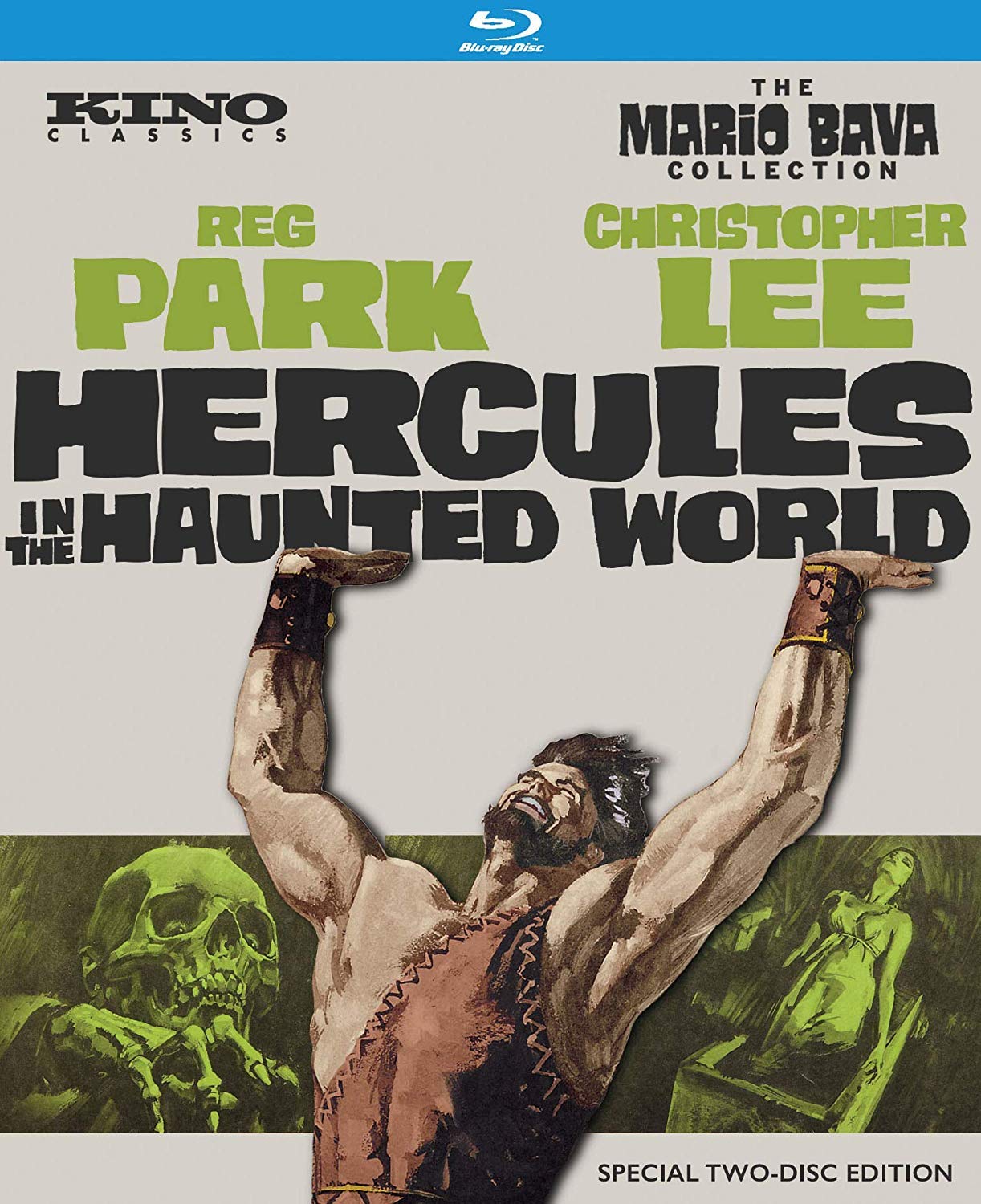