Posted on November 19, 2017 by Neil Middlemiss
A landmark horror film gets a terrific presentation 4 Stars

As an admirer of horror films of all shapes and sizes, Hellraiser is certainly one of the very best. Its sequels have been a series of increasingly diluted and evermore generic episodes that capitalized on the Cenobites and Pinhead in particular, but the original remains the benchmark film and perhaps the most original horror film of the 1980’s. And the Cenobites, a classic Barker creation of demonic creatures, unique and grotesque, have provided the sequels with the occasional great moment. These gothic figures, self-described as “Explorers in the further reaches of experience, demons to some,” are among cinemas most recognizable creatures and have in no small way influenced the visions of grotesque demons ever since.

“It opens doors…doors to the pleasures of Heaven of Hell, I didn’t care which”

Clive Barker is a distinct and unusual voice in the chorus of horror. A dark soul and sinister imagination wrapped in stories of obsession and pursuits of the sensually macabre. Hellraiser, based on his works ‘The Hellbound Heart’, was his directorial debut and is quite different from the horror films that it is often grouped with. In the same breath as Barker’s dark tale is often films like the A Nightmare on Elm Street, Friday the 13th and Halloween sagas. But Hellraiser could not be more different. Rather than relying framing its horror idea and icon around the ‘slasher film’ framework, Hellraiser frames themes of sadomasochism, gothic horror and layers of evil around more grounded, familial dramatic elements providing for a  richer, darker and immensely more sly and wicked horror film. Finally, the foreboding evil central character of Pinhead is a far more intelligent creation, one that has provided the Hellraiser series with a longevity that it has enjoyed through seven sequels and an upcoming remake.

The story begins in Morocco, with a man purchasing a puzzle box and setting about to unlock its mysteries. He manages to do so and hooks on chains spring from the room, tearing into his flesh. We then jump to England where a couple, Larry and Julia are moving back from Brooklyn to their home in the United Kingdom. Larry discovers that his brother Frank had been squatting their while he was away. His wife Julia, whom had had an affair with Frank, finds he memories of that passionate affair awakened. When Larry cuts his hand moving a mattress up the stairs, his blood spills from his wound to the floor, somehow initiating the resurrection of Frank, the man who unlocked the mysterious puzzle box in Morocco, who had been taken to Hell. Julia discovers Frank in one of the dank upstairs bedrooms and she is appalled. But her disgust and fear at his partially formed body of merely bone and muscle subsides and is replaced with her draw to the illicit love for Frank, a deeply sexual fixation that still tantalizes and haunts her. She is quickly tempted to help him, luring unsuspecting men with the promise of sex into her house and the room where Frank patiently awaits their blood. Blood that will feed him the flesh and skin to make him whole again. Only Larry’s daughter, Kirsty, who has a strained relationship with her mother-in-law and who discovers the despicable acts of her mother in law and uncle, can hope to stop them when she opens the puzzle box, calling forth the Cenobites, and offers to lead them to the one who escaped them in exchange for her freedom.

Clive Barker’s creation is remarkably brutal and imaginative and, even more now that 20 years have passed, cut from a wholly different cloth from other horror films. Where popular slasher films would exploit teen sex and reward such exploits with a brutal death, Barker treats sex as a symptom of even darker desires, an exploit that does not result in death but serves as a catalyst for wicked deeds. And the evil in his film is much more complex. He chooses to have the malevolence in his film be not the creatures from Hell but rather the dark souls who are decidedly human, who act with brutality. He does exceptional work on such a tight budget and for his first foray into film work. He cleverly interweaves family drama with otherworldly horrors and shines in the scene where he juxtaposes the erotic exploits of an adulterating wife with the bloody cut on Larry’s hand – an accident that provides the wicked brother Frank with the means to come back. And Frank’s birth from the house is a signature moment. As gooey and grotesque at times as Rob Bottin’s incredible work on John Carpenter’s The Thing and demonstrative of the high quality work produced by Bob Keen and team.

Playing the daughter Kirsty, is Ashley Lawrence in her first ever film role. She is required to twist and turn in fear and horror at what she witnesses, and does well with such familiar horror film moves. Not the strongest of actresses here, but good for her first time and we are able to stand with her when she uncovers the macabre goings on. Playing Julia is Clare Higgins who gives a very good performance as the cold, malicious adulterer. She plays the shift from a frightened woman to a calculating murderer very well. As Larry is Andrew Robinson, the man who imbued the character of Garak on Star Trek: Deep Space Nine with such an ambivalent morality and charm that made him extremely memorable on that show.

Here he plays an everyday man, nice but oblivious to his life and his wife, and he pulls it off convincingly. In the last act, when he gets to portray the fully resurrected Frank, his tenor shifts completely and he adopts the crazy, unhinged psychopathic brother with surprising ease. Lastly we have the Cenobites and Doug Bradley’s immortal ‘Pinhead’ (though his character is billed merely as ‘Lead Cenobite’ for this first film). There is something completely fascinating about this character and how he portrays it. The sinister and patient presence of Pinhead and the other Cenobites (listed as ‘Chattering’, ‘Butterball’ and ‘Female’ Cenobite in the credits) is unsettling and intriguing all at once.

Clive Barker, by his own admission doesn’t do exposition very well, he even struggles a little with moments of relationship drama, and those moments during the first act are a little slow. But what he does do well is watch his characters suffer their fates – whether it is a vicious and bloody end or a descent into wicked and evil, he marvels at their deadly journey and revels in the perverse eroticism that accompanies it. He also adeptly creates an atmosphere in Hellraiser that is as fully realized as his characters. He seems to bask in the darkness and dankness of the unkempt, the fraying and seedy underside of the world with muck covered walls and floors, and persistent decay.

The final element of this film that raises it above so many others is the contributions of composer Christopher Young. He provides a magnificent score that accentuates the epic nature of the evil at hand but never overplays the localized horror – he counterpoints the claustrophobic and tight atmosphere with a rich orchestral score, laced with memorable themes and held lofty by the voice of a choir – elevating the music to something quite ambitious.

Arrow presents an improved version of Hellraiser over the previous release, though with its brighter overall tone, it is quite different at times than the darker, broodier 2009 Anchor Bay release. With a new 2K restoration approved by director of photography Robin Vidgeon the level of detail is improved, and softer shots seem to have found their way better here. Film grain, and the evidence of its modest budget, are faithfully retained even as the brightness gives rise to some noise and blooming. More of the print damage found in the earlier release has been addressed as well.

The brightness compared to the more familiar dark, murkier version (which seemed fitting of the low budget) takes a moment to get used to, but what comes in return is a deeper level of detail. Shadows are still defined and the colors and bolder, especially the raw flesh and spilled blood.

I was a fan of Anchor Bay’s earlier release, but Arrow’s release, overall, improves upon what came before.

Arrow presents Hellraiser with both uncompressed PCM Stereo 2.0 and Lossless DTS-HD MA 5.1 sound. An improvement over the previous Dolby TrueHD 5.1 audio track, it isn’t a revelation, but adds more dimension. As with the previous audio, the rattling and clanging of wood and metal that signify the chains of eternal hell are immersive when shown, and Christopher Young’s excellent, gothic and mournful score sounds excellent.

Arrow provides a handsome collection of special features, some new and some ported from the previous release.

Leviathan: The Story of Hellraiser: Brand new version of the definitive documentary on the making of Hellraiser, featuring interviews with key cast and crew members. The mix of vintage and new interviews helps provide a comprehensive look at the Hellraiser legacy and it’s a fascinating viewing experience, not just for die-hard fans, but for the curious as well.

Soundtrack Hell: The Story of the Abandoned Coil Score Coil member Stephen Thrower on the Hellraiser score that almost was. An interesting piece with some samples of their samples over the film.

Audio commentary with writer-director Clive Barker: An older commentary, but not available on the previous Anchor Bay release, is notable for his passion for his finest film.

Audio Commentary with Writer/Director Clive Barker and Ashley Laurence – Moderated by screenwriter Peter Atkins (Hellbound, Bloodline) – Barker himself is revealing, divulging great production experience anecdotes and sharing his indecisiveness and inexperience in the director’s chair for this picture. A full commentary with nary a break or pause- good stuff.

Hellraiser: Resurrection – (24:25) – Writer/Director Clive Barker discusses his Hellraiser creation and cast members also share their memories of becoming involved in the low-budget horror film. I don’t really think anything new is presented here from Barker or Ashley Laurence that isn’t already shared in the interviews and commentaries also provided, but hearing from Doug Bradley (Pinhead) and the visual, make-up and costume artists is still very interesting. The section on artists that puncture and pull their skin made me cringe but your stomach may do better than mine when watching.

Under The Skin: Doug Bradley on Hellraiser – (12:32) – Another interesting conversation, this time with the actor who portrays the iconic Pinhead character on getting the role and how he went about portraying such a unique and gothic figure.

Trailers & TV Spots – (8:41) – See the US R-Rated trailer, the US G-Rated Trailer, the International trailer and 4 television spots for Hellraiser. The R-Rated trailer looks good but the other trailers are VHS quality only.

Still Galleries – (10:37) – Images available in four galleries, ‘Behind the scenes’, ‘Make-up & SFX photos’, ‘Promotional Material’ and ‘Storyboards’, which can be seen individually or via the play all feature. These are slideshows set to Christopher Young’s great score for the film.

Arrow’s release is the finest presentation of the film I’ve seen so far, though I still greatly admire the Anchor Bay release and recommend holding on to it for few missing special features which don’t appear here. 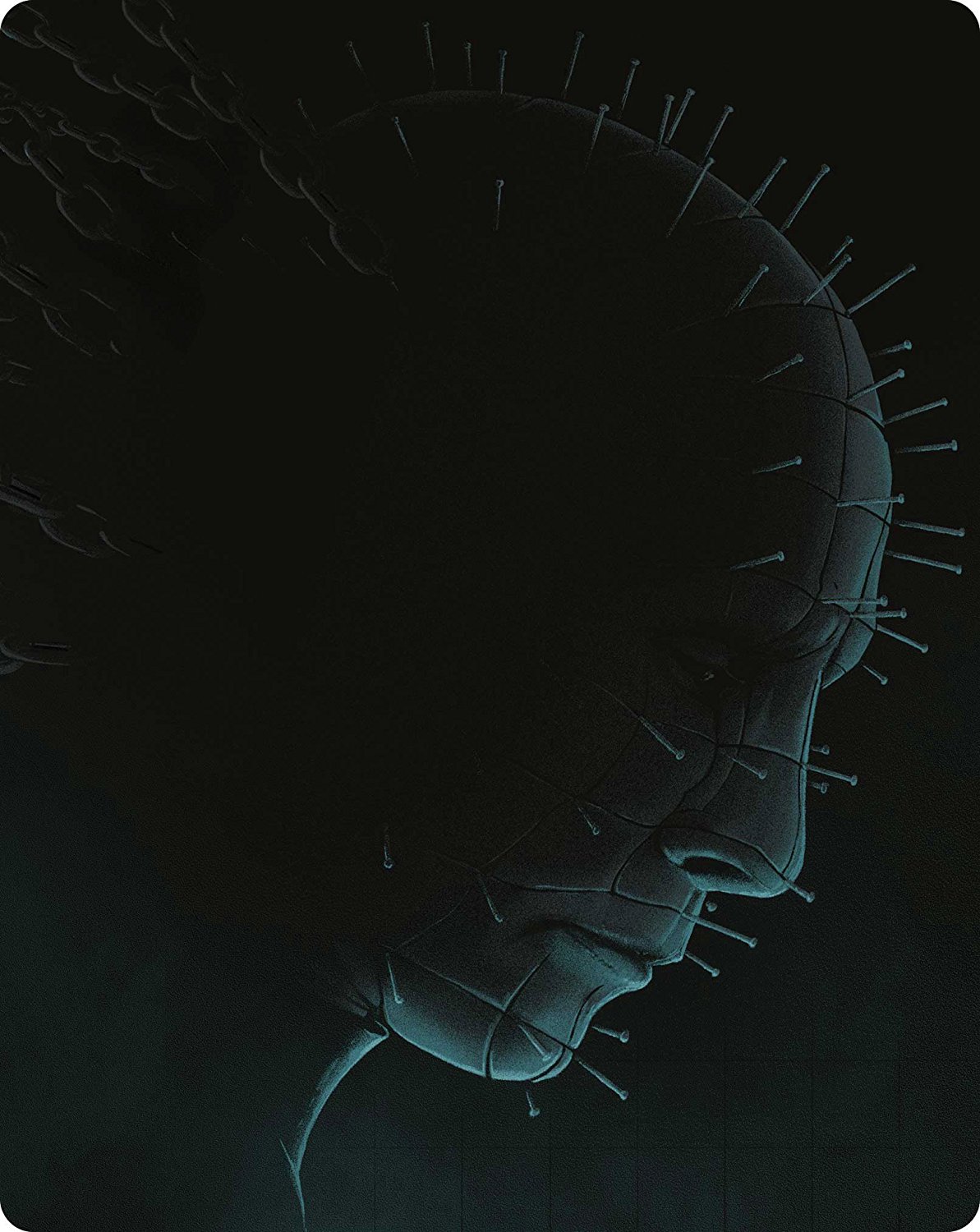