Forum List What's new Dark Style Change width
Log in Register
What's new Search
Menu
Log in
Register
Navigation
Install the app
More options
Dark Style
Close Menu
Posted on July 14, 2019 by Matt Hough
You are using an out of date browser. It may not display this or other websites correctly.
You should upgrade or use an alternative browser.
Lilting, light-hearted period musical from Fox's Golden Age. 4 Stars

20th Century Fox’s 1943 remake of its 1936 musical King of Burlesque was retitled Hello, Frisco, Hello, and it marked the long-awaited return to the screen for its star Alice Faye who had taken an extended maternity leave after appearing in her hit film Week-end in Havana.

20th Century Fox’s 1943 remake of its 1936 musical King of Burlesque was retitled Hello, Frisco, Hello, and it marked the long-awaited return to the screen for its star Alice Faye who had taken an extended maternity leave after appearing in her hit film Week-end in Havana. Fox went all out for their star’s new movie filming it in period with lavish costumes and production design in expensive Technicolor. It was another smash for Miss Faye, but motherhood had changed her perspective on show business, and she’d only make three more films on her contract before leaving the screen for more than a decade.

Johnny Cornell (John Payne) is a Barbary Coast producer with dreams of hitting it big with his vaudeville troupe consisting of himself, leading singer Trudy Evans (Alice Faye), comic second banana Dan Daley (Jack Oakie), and soubrette Beulah Clancy (June Havoc) if only he can think of a scheme to raise a little capital. Trudy, of course, loves Johnny, and together with some behind-the-scenes chicanery they make their act one of the biggest in show business which leads to a succession of thriving dance halls and vaudeville palaces on the Barbary Coast. Cornell’s massive success pushes the social climbing Johnny to drop any thoughts of romantic interest in Trudy for once-wealthy socialite Bernice Croft (Lynn Bari) whose name can open doors for Johnny’s ambitious move to Nob Hill. Heartbroken Trudy accepts an engagement in London’s Princess Theatre where she is rapturously received. But Johnny’s preoccupation with society’s whirl leads to many poor financial decisions which leave his career and marriage in tatters.

Screenwriters Robert Ellis, Helen Logan, and Richard Macauley come up with the framework for the lengthy succession of musical numbers, but it’s one of those romantic triangles meant to test the audience’s patience since it’s clear to everyone but the leading man whom he really loves and who really loves him. The narrative isn’t meant to hold one’s attention, of course; it’s the string of musical numbers, by both the four stars and a few surprise guests, that is the real reason for the movie’s existence. Alice Faye, naturally, has the lion’s share of musical moments with most of the songs taken from pre-existing material. She’s particularly impressive with “Ragtime Cowboy Joe,” “Has Anybody Here Seen Kelly?” “By the Light of the Silvery Moon” (her London production number that finds her in particularly mellow voice), and the title song which begins and ends the movie. But the picture’s real claim to fame is its original Oscar-winning tune “You’ll Never Know” which Faye sings three times in the film cementing it as not only a beautiful, memorable ballad (music by Harry Warren, lyrics by Mack Gordon) but becoming the star’s signature tune. Jack Oakie and June Havoc contribute their fair share to the melody and mirth with “Grizzly Bear,” “Sweet Cider Time,” and especially “I’ve Got a Gal in Every Port.” A roller skating specialty with “Tulip Time in Holland” might have been dispensed with, but it did provide a song and spectacle interlude without the quartet of leading players. Director Bruce Humberstone gets the film off to a smashing start slowly dollying us past various Barbary Coast joints wonderfully setting up the film’s atmosphere and tone in its first few moments.

Alice Faye was a most welcome presence in her return to the screen after a two-year break, and she looks especially smashing in a succession of Helen Rose period gowns, her figure perfectly suited to the fashion demands of the turn-of-the-century period. John Payne lends his reliable leading man status to the movie, and he even gets to sing with his own voice in a couple of brief numbers. Jack Oakie gets some prime comic moments for mugging and slapstick, and June Havoc gets what is probably her best role in a major studio musical and makes the most of it after which she returned to New York and wowed them on Broadway in Cole Porter’s Mexican Hayride. Lynn Bari is rather off-putting as the snobbish Bernice Croft causing one to wonder what Johnny actually sees in the haughty socialite. In smaller roles, mountainous Laird Cregar pops in and out sporadically as a gold prospector putting the tap on friend Johnny for a new grubstake, Ward Bond is the feisty saloon owner who doesn’t appreciate musical talent, and John Archer gets to wordlessly pine for Trudy as she pines for Johnny.

The film’s theatrical aspect ratio of 1.37:1 is faithfully rendered in this 1080p transfer using the AVC codec. With only the problematic Eastmancolor elements at their disposal, Fox engineers have done the best they can to maintain a consistent multi-hued look to the movie (something woefully not present in their work on Pin Up Girl), but while no one will ever mistake this for Technicolor, the colors they do have are controlled and quite pretty, and skin tones remain consistent for the most part and not objectionable. Fox has also cleaned the movie up nicely (clips used in the bonus featurette show dirt and debris which are not present in the film on display) while maintaining a film-like level of grain and a nice degree of sharpness. The movie has been divided into 24 chapters.

The DTS-HD Master Audio 2.0 mono sound mix is era-appropriate with dialogue, song lyrics, music score, and sound effects all expertly combined into a single track. There are no age-related problems with hiss, crackle, or flutter, and there is a very good range of fidelity in the mix.

Hello Again: The Remaking of Alice Faye (15:15, SD): Faye’s daughter Alice Regan along with a collection of personal friends and music and cinema historians including Michael Feinstein, Miles Kreuger, Eve Golden, Drew Casper, Larry Bellman, and Hugh Hefner discuss Alice’s life and career. An error is made when someone credits the film’s two cinematographers Charles Clarke and Allen Davey with winning the 1943 color cinematography Oscar (The Phantom of the Opera won the prize though this film was nominated).

Six-Page Booklet: contains some color stills from the movie, original poster art on the back cover, and film historian Mike Finnegan’s entertaining essay on the film.

Hello, Frisco, Hello is good old-fashioned entertainment from Hollywood’s Golden Age, designed for an hour and a half of light-hearted fun with lilting period songs, dances, and beautiful Technicolor production design. There are only 3,000 copies of this Blu-ray available. Those interested in purchasing it should go to either www.twilighttimemovies.com or www.screenarchives.com to see if product is still in stock. Information about the movie can also be found via Facebook at www.facebook.com/twilighttimemovies.

Thank you for that review with its balanced perspective about the video quality.

On the subject of that wonderful song "You'll Never Know" I just have to say that everyone who appreciates well-written songs should listen to Dick Haymes' version recorded in the mid 1950s.
M

I know the history of Fox discarding original elements of most of their Technicolor films and the problems they have putting these films on Blu-ray.

But one question:
Why do the DVD's look so much better and much more colorful?.......

Martin Zandstra said:
I know the history of Fox discarding original elements of most of their Technicolor films and the problems they have putting these films on Blu-ray.

But one question:
Why do the DVD's look so much better and much more colorful?.......
Click to expand...

Possibly created via an old telecine of a CRI, not yet faded.
You must log in or register to reply here. 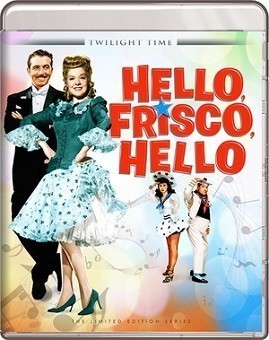