Engaging neo noir caper film has a few surprises up its sleeve. 4 Stars

Sony has brought Heist to Blu-ray reminding us once again how well David Mamet did with both plotting and directing a movie he considered a modern film noir.

The year of 2001 produced two outstanding caper films: Frank Oz’s The Score and David Mamet’s Heist. The former had the starrier cast (De Niro and Brando acting opposite each other for the first and only time), and while both movies had twists and turns galore, The Score had a more whimsical tone and did better at the box-office while Heist was a bit grimmer and just a tad less satisfying at its conclusion. Nevertheless, Sony has brought Heist to Blu-ray reminding us once again how well David Mamet did with both plotting and directing a movie he considered a modern film noir. Lovers of the genre can decide how this movie stacks up against the best caper flicks of the noir era: The Asphalt Jungle, Rififi, and The Killing.

Joe Moore (Gene Hackman) has a job that he loves and is expert at: he’s a thief. When his latest jewelry heist goes sour after he gets caught on a security camera tape and his fence Mickey Bergman (Danny DeVito) reneges on the money he’s owed, Moore, his wife Fran (Rebecca Pidgeon), his partner Bobby Blane (Delroy Lindo), and their utility man Pinky Pincus (Ricky Jay) find themselves broke, betrayed, and blackmailed. In order to get what’s owed him and a big enough final score on which he can retire since his face will now be known to the police once the security tape is viewed, Moore is forced by Bergman to commit his crew to do one last big job, the robbery of a cargo plane filled with Swiss gold.

Writer-director David Mamet wastes no time in getting the action underway: he begins his movie with the well-oiled team committing that jewelry heist while we view the cool, easy way the team adjusts to snafus that inevitably happen during even the most well-planned capers. That finesse under pressure is a watchword of the team, but their slick ability to roll with the punches gets compromised when Bergman insists his inexperienced nephew Jimmy Silk (Sam Rockwell) accompany the team on the Swiss gold job, his green and emotional presence a continual threat to the team’s safety from discovery or capture. His presence also throws a potential romantic wrench into the husband-wife relationship since he’s wildly attracted to Moore’s spouse Fran. Some of the twists that Mamet inserts into his narrative aren’t all that surprising; others do jolt with their invention and unexpectedness, but the very expectation that there are going to be crosses and double crosses prevent many of them from being truly startling. Mamet’s credentials as an action director aren’t quite as solid as one might wish, and the climactic showdown at the dock isn’t nearly as suspenseful and electric as a more experienced director might have pulled off (thankfully, though, Mamet doesn’t indulge in overt gore making the violence throughout the movie easier to take than it might have otherwise been). The movie’s centerpiece – the robbery of a cargo plane in the middle of its runway take-off – is undoubtedly the movie’s best sequence: well acted, well plotted, and well directed.

Gene Hackman and Delroy Lindo walk away with the film’s acting honors. Their well-oiled teamwork is a joy to behold, and individually they can be lighthearted or steely depending on the situation. Danny DeVito does his patented cocksure strut that we’re all too familiar with (though that’s not to say it isn’t effective here; it’s just not fresh). Sam Rockwell has some good moments as the thick-headed newbie learning on the job, and Mamet favorite Ricky Jay does his usual low-key acting that gels nicely with the rest of his team. Rebecca Pidgeon (Mrs. David Mamet in real life) is meant to be the enigmatic femme fatale of this neo noir, but there is not much chemistry with Hackman (you’ll likely spend some of the movie as I did thinking they’re father and daughter), and her overall performance is adequate but nothing more. Patti LuPone has a couple of key scenes that figure into the robbery plot, but the role doesn’t really allow her to deliver anything really extraordinary.

The film’s 1.85:1 theatrical aspect ratio has been faithfully delivered in this 1080p transfer using the AVC codec. The transfer is clear and clean with no age-related artifacts in sight. Color is solid, and black levels are good but not particularly great. Sharpness isn’t always in view; there are occasional moments which don’t seem to be dialed in quite right, but that could be a problem with the original cinematography by Robert Elswit. The main menu doesn’t offer any chapter selection menu.

The DTS-HD Master Audio 5.1 sound mix offers Mamet’s crackling dialogue nicely precise and understandable, but the mix with Theodore Shapiro’s music and the sound effects seems strangely underpowered. The rears are not effectively used in the mix though there is decent separation in the front stereo soundstage. Naturally, there are no problems with hiss or any other age-related anomalies.

David Mamet’s Heist is an enjoyable caper film. The writer-director has chosen a slightly grimmer tone for his story than other more light-hearted sting films of the era utilized, but the fine cast and above average direction promise viewers a good time even when all of the surprises built into the storytelling aren’t quite pulled off. Recommended!

I also enjoy this film immensely, and glad to read your thoughts on the video quality, as posters on another forum were complaining about it. I spot checked my own copy and felt the same as you, but I haven't had the time to sit down and watch the film in its entirety on blu.

I don't recall seeing the movie The Score, but I should probably give that one a watch sometime.
Expand signature
-Rodney
Reactions: Matt Hough
M

As a whole, this is not a great movie. But every Mamet fan should see it for Hackman's performance. I think he delivers Mamet dialogue better than any other actor; it sounds so natural coming from him. Delroy Lindo and Danny DeVito are also great.

The movie is really about, or the more interesting way to view it is, the friendship between Hackman's and Lino's characters.

I recall really liking this film back in the day, but haven't watched it for years. Will have to pick up the blu.
Expand signature
The purpose of an education is to replace an empty mind with an open mind.
You must log in or register to reply here.
Share:
Facebook Twitter Reddit Pinterest Tumblr WhatsApp Email Link 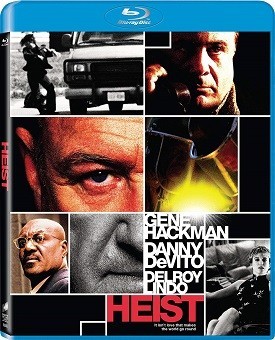